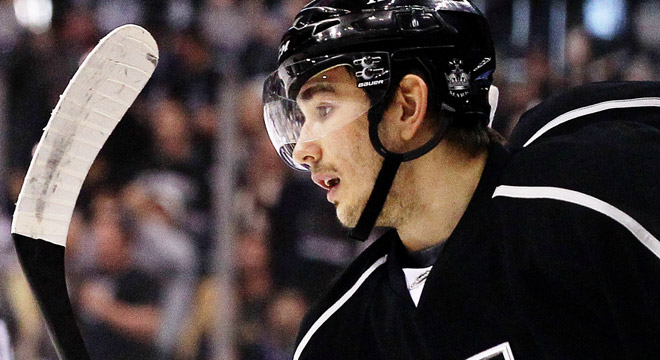 The right decisions with the puck

Road to the NHL: From Chelyabinsk to Los Angeles

Slava Voynov began his career playing for Traktor Chelyabinsk. In 2006, he debuted in the professional team at the age of 16. The next year, he made the Russian junior team, winning silver in the World Championship.

A year later, he won the bronze and also silver with the Juniors (Voynov scored 5 points and was picked for the World Championship dream team). Talent scouts that he was a “talented and skillful defenseman.

Strong in defense, makes the right decisions with the puck. He needs time to build up his physique and become a master.”

After playing in Russia for two years, Voynov failed to develop impressive offensive skills. During 67 games for Traktor, he scored just one goal and made three assists. Yet his confident performance and excellent Plus/Minus stats allowed Yaroslav to take his first steps towards the NHL, though this proved to be a thorny path.

Voynov spent three years under a novice contract at a farm club for the Los Angeles Kings. He scored 51 points during a season with Manchester and was invited to play in an All Stars match. In the off season, Voynov was sought after by the KHL, especially by his hometown club, Traktor (Chelyabinsk). Slava opted to stay with the Kings, signing a two-year bilateral contract; he eventually made his debut in the NHL and won 3 (2+1) points in away games with Dallas (5:3).

Then he returned to the farm club. Los Angeles fans launched a “bring back Voynov” campaign on the Internet. The Russian secured a place with the NHL only when the Kings struck a deal with Columbus, getting forward Jeff Carter in exchange for defenseman Jack Johnson. Voynov filled Johnson’s place in the first-string team.

At this point, Voynov is mostly known for his potential. He currently plays in the second pair of defensemen, together with Willie Mitchell. His performance is not exactly stellar and his best match with the NHL remains the game against Dallas (5:3).

“Take two defensemen, a Canadian and a Russian. They play equally well. Surely a Canadian will be picked for the main team. You have to be head and shoulders above him to attract attention.”

“I was interviewed before I left for America. I then read these interviews and some of the things I found there I had never actually said and some other things were inflated. After that I decided to stay away from the press.”

“The AHL is a jolly place. They had us wear women’s dresses and dressed us up as rockers. With the Los Angeles Kings, you just have to stand on a chair and sing the Russian anthem”.

A versatile defenseman who works hard all over the field, uses body checks and takes a shot at the goal frequently, Voynov is in his debut season. Who knows where Voynov would be now if he had not been stuck at the AHL for so long?

Analysts compare him with Drew Doughty. The leader of the Los Angeles Kings is the same age as Voynov. They played against each other as juniors and were ranked equally, but by 21, the Canadian had already won the Olympic Games, was nominated for the Norris Trophy and played 300 matches for NHL.

“Doughty is a star and Voynov is simply a good player,” experts say.

Voynov is expected to be recruited onto the Russian national team and have a chance to play at the Sochi Olympic Games.

Voynov seldom gives interviews, so little is known about his personal life, but, of course, he loves the ocean and California where it never snows. He hails from austere Chelyabinsk in Siberia.

“Los Angeles has everything. Steam baths, Russian food, Russian stores and restaurants. So there is no room for nostalgia. I do miss my friends and relations in Russia though.”