Who’s the real Obama – that is the question 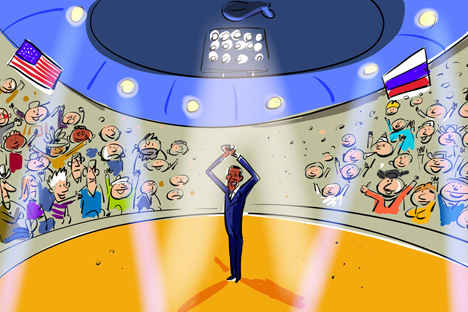 Will Obama decide to order a US military intervention in Syria without a UN mandate?

Tom Friedman, well-known author and columnist for New York Times, who just concluded a tour of Turkey, Jordan and Israel told an elite Moscow audience on Thursday that, in a nutshell, if there is a free and fair presidential election held in Syria under international supervision, there can only be one victor – Bashar al-Assad.

It is the TINA [there-is-no-alternative] factor, Stupid! Friedman was making the point that the regime’s social base by far exceeds the Alawite community and that the majority of Syrians prefer the stability and security that the Assad regime provided. Friedman is, of course, a seasoned ‘Arabist’, having been stationed in Beirut for several years during the civil war in the 1980s, and his insightful estimation cannot come as surprise.

How far Friedman’s views matter in the corridors of power in Washington is difficult to judge. The point is, we are getting some very conflicting signals indeed. President Barack Obama is yet to put together a new cabinet team and also, it is hard to imagine that a major foreign policy move is possible when the president is so obviously preoccupied with the so-called “fiscal cliff”.

Related: What is there in Obama’s victory for Russia?

Why then the “conflicting signals”? For one thing, we almost lost track of it that while the attention of the rest of the world was riveted on Gaza recently for an 8-day period, the European Union and many major European powers (including Britain) did not lose sight of Syria. In fact, the EU has gone right ahead where angels fear to tread – by recognizing the newly formed Syrian opposition umbrella group as a legitimate interlocutor even though it has far from established its credibility yet and many experts are of the opinion that the ramshackle group can’t hold together for long. The EU has, in other words, deliberately chosen to keep the powder dry.

Meanwhile, Turkey put in its request for the deployment of the missile defence system by the North Atlantic Treaty Organization [NATO] on its border with Syria, and the western alliance has responded with alacrity as if the decision had been taken in Brussels even before Ankara made the formal move. NATO has touted the deployment of the Patriot missile in Turkey as a defensive move to protect a member country, but there are no takers for this facile explanation. The Patriot is not a defensive weapon. Period. At any rate, as Russian President Vladimir Putin pointed out earlier this week, Damascus is not crazy enough to contemplate an attack on Turkey when it is locked in an existential struggle of its own.

“It’s common sense, you don’t have to be an expert or use intelligence reports to see that Syria is far from plotting an attack on its neighbors – it is absolutely unrealistic,” Putin said at a joint news conference with Turkish Prime Minister Recep Tayyip Erdogan in Istanbul on Tuesday. The suspicion lingers, therefore, that NATO has just taken the first requisite step toward creating a “no-fly zone” in Syria, which of course, is an imperative need in military terms before the launch of a ground operation.

All this time, however, NATO’s official position continues to be that it does not seek a military solution to the conflict in Syria and that the solution will have to be a political one. Following the Russia-NATO meeting at the foreign minister level in Brussels on Tuesday, Sergey Lavrov also acknowledged that the alliance reaffirmed to him its aversion toward military intervention in Syria.

On the contrary, however, media reports have just appeared that the USS Eisenhower, the American aircraft carrier, arrived on the Syrian coast on Wednesday. According to The Times, London, the US is now in a position to take military action in Syria “within days” if the Obama administration takes such a decision. According to the DEBKAfile, which has links with the Israeli intelligence, Washington has assembled a formidable military force near Syria with about 10000 troops, 17 warships, 70 fighter bombers, 10 destroyers and frigates and so on.

Interestingly, the US Senate also formally recommended to the Obama administration on Wednesday to study the possibility of imposing the no-fly zone over Syria. The overwhelming senate vote – 92 to 6 – requires the Pentagon to report on the use of US military assets to cripple the Syrian air force. Alongside, Washington has also racketed up the rhetoric with Obama and secretary of state Hillary Clinton warning the Syrian regime against the use of chemical weapons and the US media promptly beginning to speculate that Assad could be moving in that direction. In sum, Washington seems to be building a casus belli for justifying a military intervention.

Now, why would Obama do that? One plausible explanation is that Obama is under pressure to score a “success” in the Middle East against the backdrop of the string of setbacks to the US strategy in the recent period culminating in the thumping success of the Palestinian move to gain the recognition of the United Nations General Assembly. But an intervention in Syria also most certainly constitutes a considered US move on the Middle East chessboard when the locus in the correlation of forces is palpable shifting. Hamas has scored a psychological victory in the latest conflict with Israel and the pendulum is swinging in favour of the raison d’etre of the so-called “Resistance”, which of course works to the great advantage of Iran in political terms. Again, the conflict in Syria is unexpectedly becoming a far too protracted affair for Turkey’s comfort. Besides, Saudi Arabia is pretty much disenchanted with the Obama administration’s perceived lack of resoluteness to bring about the “regime change” in Damascus.

However, the big question remains: Will Obama decide to order a US military intervention in Syria without a UN mandate? There is nothing to show so far that the Russian opposition to outside intervention in Syria may have mellowed – although the Turkish and Saudi media have been painstakingly searching for nuances in Moscow’s position. (China’s Xinhua news agency has, in fact, cited reports that “Moscow is likely to provide Syria with Iskander Missiles in the face of the US Patriots.”) All factors taken into account, therefore, what can be said for certain is that any US intervention in Syria will set the tempo of the upcoming Obama presidency in January.

We have a US president who has taken pains to reiterate that he would rather be remembered in history for his leadership in creating jobs in the American economy than for starting a war abroad. In this case, clearly, it may also turn out to be a war with “catastrophic consequences”, to use the ominous words of Syria’s deputy foreign minister Faisal Mikdad in a statement on Thursday.