A bastion of morality in a sea of uncertainty 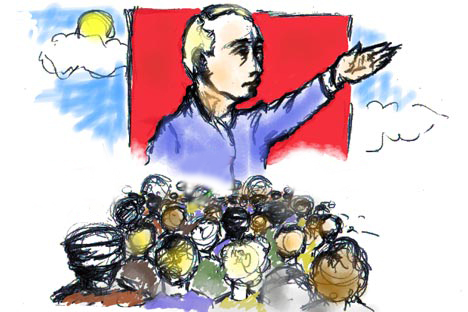 The Kremlin’s domestic and foreign policies are aimed at minimising global turbulence and reducing its risks as much as possible.

Prior to President Vladimir Putin’s address to the Federal Assembly, the first since his return to the presidency, sources in the Kremlin predicted that he would pay significant attention to national security issues. Those who prefer strategic issues such as defence and foreign policy were disappointed, because Putin was terse on these subjects. However, the sources were correct: Putin's speech focused on national security, but he took a new approach.

Since his election articles published in January and February, Putin has been pushing one and the same idea, albeit in different forms. That is that the world around us is dangerous and unpredictable, and that matters are only getting worse. Mutual dependence and permeability are extremely high, it is impossible to cut yourself off from what is happening elsewhere.

Foreign and domestic events are interconnected, and external instability interacts with domestic problems, exacerbating both and that acts like a turbulence funnel. The Kremlin’s domestic and foreign policies are aimed at minimising this turbulence and reducing the risks as much as possible.

On the international arena, Moscow seeks to counter those moves by other states that it believes are aggravating this chaos and destroying the last remnants of any system. This is why the gist of Russia’s position on Syria is as follows: if things cannot be fixed, they should at least be prevented from getting worse. But such opportunities are fairly limited.

Russia remains an influential player, but it is one of many. Therefore, when it comes to the external-internal factors that determine national security, the emphasis should be placed on what is under control or what can be influenced.

A state’s security is determined by its internal stability and its ability to resist external influences. Putin is convinced of the truth of this concept. External influence is no longer limited to the actions of specific enemies, as was once the case, but is exerted in a highly confused environment. Putin is outlining the main parameters of what he sees as a prerequisite of stability.

This is, very likely, the first time that the words “morality” and “rectitude” have been uttered so many times in a speech like this.

It is clear from the context that the current condition of society and the ruling class requires the restoration of these notions.

Putin had many good words to say about the government's civil responsibility and accountability to the public. He criticised government officials and emphasised that they should set an example. Obviously, statements alone will change nothing, but the fact that this issue has been raised is, in itself, important.

Russia’s misfortune over the years was rooted in the interpretation of social transformation as primarily an economic project, in which a mathematics-based approach prevailed over one rooted in morals. Even heated debates over “European values” focused more on arguably transient political and even geopolitical issues than any real substance.

Putin repeatedly raised the issues of culture and education that will become a catalyst for development. Many within Russia are apprehensive about the ever-changing ideas behind educational innovations, which are in any case more focused on streamlining expenses and institutions. In other words, quantitative parameters prevail over qualitative ones.

Although Putin noted the importance of “restructuring,” because development is impossible without change, he also emphasised the essential role of the social and cultural aspects.

The president, of course, also devoted some time to his pet subject: demographics. He said “we must be better and there should be more of us.” Human resources are, he posited, the genuine foundation of sovereignty, which is itself the overriding priority.

Putin introduced the new notion of “geopolitical demand for Russia,” which “should be multiplied rather than simply preserved.”

“Our neighbours and partners should need us. I want to emphasise that this is important for Russia. This concerns our economy, culture, science, education and diplomacy, especially the ability to organize collective efforts on the world arena…” he continued, adding: “And, last but not least, this concerns our military might, which guarantees Russia’s security and independence.” “We should press forward and strive only for the future.” This statement builds on what Putin wrote in his election articles, when he stated that the post-Soviet era and its agenda are over.

It is no secret that, for almost 20 years, the leitmotif of Russian policy was to overcome the trauma caused by the Soviet Union’s disintegration. This policy has its pluses and minuses. However, this time Putin emphasised that Russia’s history did not start in 1917 or 1991, and that the nation should rely on its more than millennium-old history.

It is particularly noteworthy that, for a second time, Putin mentioned the need to cherish the memory of the victims of World War One, which was virtually wiped from the nation's history in Soviet times.

Putin’s words give Russian society the hope that it will be able to leave behind those tired old disputes about the 20th century and start seeking new historic foundations for its identity.

Putin touched upon one of the main problems: the role of the Russian language and Russian culture as uniting factors. This has always been perceived as an axiom, but the departure from the imperial mentality that implied, among other things, multi-ethnicity under a single umbrella, is threatening to turn issues of self-determination into yet another element of turbulence.

Once again, much like during his election campaign, Putin strongly rejected any form of nationalism and chauvinism as destructive for those that they are supposed to protect. This is where Russia will face the greatest challenges in the years to come. It will have to focus on ethnic and religious contradictions.

Putin has often emphasised that imposing any form of democracy or financial interests on Russia is inadmissible. However, contrary to some expectations, he did not make any strong statements about outside forces. Moreover, he noted that given the deplorable condition of society, “there is no need for an external enemy – everything will fall to pieces by itself.”

This can also be considered a departure from the post-Soviet discourse, which was based on endless debates about who, or what, was responsible for the Soviet Union’s collapse. Recent years seemed to see the finger increasingly pointed at “external enemies.” The president’s address opens up a qualitatively new phase, and every question is precise. Whether or not we will have any answers will become clear soon.