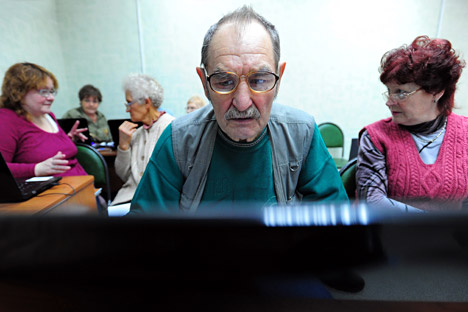 The proportion of working pensioners has been growing since the 1990s, according to official statistics. Source: ITAR-TASS

As rumors of pension reform spread, the number of working retirement-age Russians continues to grow. Russian citizens are working past retirement age for a number of reasons, which have been changing over the last 20 years. The vast majority of working pensioners, however, cite inadequate pension funds as the main reason for their continued labor.

According to the Russian Pension Fund, 37.4 percent of Russian pensioners were still working as of October 1, 2012, compared to 36.4 percent as of January 1, 2012. The number of working pensioners has risen quite significantly: in 2011, Rosstat reported that 23 percent of Russians continued to work, on average, six years past retirement age.

The increase in the number of working pensioners is attributed to both the nationwide improvement in health (according to the Labor Ministry, the average life expectancy has increased from 67 years to 70.3 years over the last five years, while the retirement age has remained quite low) and the demand for additional sources of income, says Igor Polyakov at the Center for Macroeconomic Analysis and Short-Term Forecasting.

Rosstat reported the average pension in October 2012 to be at 9,176 rubles ($297), or 34.9 percent of the average wage. According to the Pension Fund, the retirement pension has averaged 9,817 rubles per month since April 2012. Current pensions are adequate enough to “live on, albeit quite modestly,” as Deputy Prime Minister Olga Golodets said in early October.

The number of working Russians will continue to grow, says Valery Fyodorov, general director of VTsIOM. A poll showed in 2010 that 56 percent of older people planned to continue working once they reached the retirement age, and this trend has continued.

In the 1990s, pensioners were certain that the state was supposed to provide them with well-earned rest; but fewer citizens believe in this now, Fyodorov says. The rumors about impending pension reform give pensioners even less confidence in their future: no one knows what sort of money future pensioners will be entitled to.

The reform suggests the minimum years of work experience required to receive a full pension, (40 percent of the average monthly wage), be set at 35, said Golodets. If these same rules were to take effect today, 52.7 percent of current pensioners would be entitled to full pensions – according to Rosstat, this is how many Russian pensioners have worked for over 35 years.

Polyakov believes that the number of people with long work records will fall. The situation will depend on the ability of the state to stop the outflow of labor into the informal sector, which currently employs up to 30 percent of the economically active population in Russia, notes Vladimir Gimpelson, director of the Center for Labor Studies at the Higher School of Economics in Moscow.

The Economic Development Ministry has calculated that the average pension will go down to 30 percent of the average wage in Russia by 2020. The 40 percent pension-to-wage ratio that must be attained by the solidarity pension system, alongside the seniority requirements to be imposed by the Labor Ministry, mean average pensions will fall. However, according to Andrei Chernyavsky at the Center for Development at the Higher School of Economics the figures declared by the two ministries are not mutually exclusive.