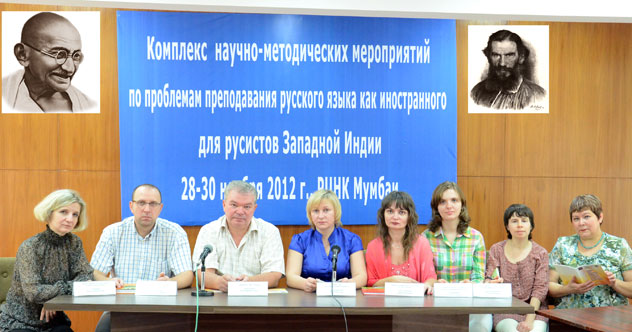 One of the best ways for Russia to enhance its global soft power is to promote its rich and complicated language. Over the last few years, the Russian Government through the Russkiy Mir Foundation has realised the importance of spreading the language. “The Russian language not only preserves an entire layer of truly global achievements but is also the living space for the many millions of people in the Russian-speaking world, a community that goes far beyond Russia itself,” Vladimir Putin told the Russian Federal Assembly in 2007.

While India does not have a large number of Russian speakers, the general warmth with which Russia is viewed in the country makes it an ideal destination to spread the language of Pushkin, Tolstoy and Dostoyevsky. The Russkiy Mir Foundation, which has a development programme for spreading Russian language teaching overseas, has been at the forefront of initiatives directed at India. In the last week of November, the Russian Centre for Science and Culture in Mumbai hosted a seminar on the challenges and problems of teaching Russian as a foreign language.

Professors from the Lev Tolstoy Tula State Pedagogical University discussed various methodologies of teaching the Russian language in countries which don’t have a particularly strong Russian heritage. Instructors from various parts of western India such as Ujjain, Kolhapur and Pune attended the conference.

Russian has been taught at the university level since 1946, when Delhi University first took the initiative. Indian interest in the language peaked in the heydays of Indo-Soviet bonhomie but was on the decline until the recent past. Instructors at various levels have argued that many universities in India use outdated teaching methods to go along with Soviet-era textbooks.

The Mumbai conference looked at addressing the pressing needs of Russian language professors in India. During a lively session, Professor G. V. Tokarev emphasised the need to attach more importance to cultural aspects of the language.  “Russians are ready to forgive mistakes in declensions, in mixing up the cases, but not errors in the cultural context,” Tokarev said. According to the professor of documentology and stylistics, it’s important for foreign students to understand the faux-pas of the language. “If a foreigner hears someone calling his boss Alyosha or Alyokha at the office and decides to do the same without having established an informal relationship, we all know what can happen,” said Tokarev. He also spoke of Russian etiquette and how it differed from languages like English and German.

Universities in Russia have been quick to adapt teaching methodologies for the Internet generation and called on Indian professors to do the same. Several interactive sites have come up on the web where foreign students can practise Russian grammar as well as learn about different aspects of Russian culture. “The distance mode of learning through the Internet will be useful to teachers in keeping abreast of changes that are taking place in our field, as also in Russian society, life and the entire system as a whole,” said Dr Chetan Thakar, who teaches Russian at the University of Pune’s Department of Foreign Languages. “Most of the teachers of Russian language in India have been trained in the Soviet era and need to keep abreast of all kind of changes that have taken place and are taking place in Russia (the Russian language included),” added Thakar, who has been teaching Russian language and literature for over 30 years. 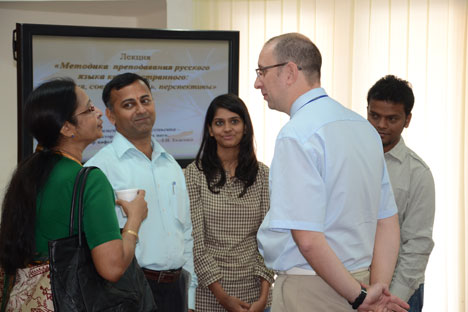 The three-day conference, which was also attended by advanced students of the Russian language, was interactive and the Tula professors were constantly looking for feedback from their Indian counterparts. “The conference was both interesting and informative,” said Dr Laxmi Mikaelyan, head of University of Mumbai’s Russian department. “Particularly engrossing for me were the lectures by Professor Tokarev and the interactive demo-class by Dr V. I. Abramova,” she said.

Indian guests were served the Tulski Pryanik, a delicious traditional gingerbread treat from the Tula region. Professor Abramova, who read the famous Russian fairy tale ‘Three Bears’ with the help of visuals, brought a piece of Russia into the audience by dressing in the traditional costume of the Tula Region.

“The professors from the Tula State Pedagogical University were very happy to note that Russian is taught at the Post-Graduate level in the University of Mumbai,” Mikaelyan said. Indian students were advised to follow the Tula-based university’s developments for information on various competitions and research possibilities.

With trade and cultural ties growing between Russia and India, the Russian language is once again poised to grow in a country that prides itself on being multi-lingual.