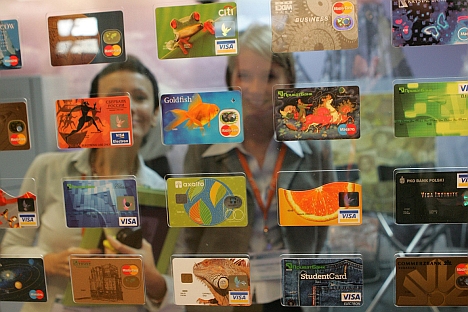 An explosion in the number of credit cards issued has banks scrambling to offer clients attractive conditions, but a major financial event could lead to insolvency.

According to the Russian Microfinance Center (RMC), the past year has seen the number of credit cards in the country rise 60 percent; Russian banks also report increased lending since January 2012.

The growth is attributable not only to the fact that the country has recovered from the 2008 crisis, but also to the first tentative steps being taken toward changing Russia’s consumption pattern.

Experts say that the growth in the credit-card market stems from the fact that, in early 2012, many of Russia’s banking majors joined the race for market share in credit cards and focused their attention on promoting products in this area.

Of no small significance was the role played by public sector banks, which began to encourage customers to take credit cards with special terms and conditions for salaried clients, thereby improving their ratings and increasing the number of cards in circulation.

Grigory Babajanyan, director of retail products at Alfa-Bank, notes “We’ve noticed a major rise in the number of credit cards issued at our bank. Sales for the year are up severalfold. Many banks in the market consider the segment to be fast-growing, with high potential for development, and are therefore focused on creating new credit-card products to boost sales performance with more aggressive marketing.”

He adds, “It’s had an effect — the market is growing; competition is increasing.”

Alfa-Bank is one of the few that managed to maintain market share and consolidate growth by joining the race in the second quarter of this year. In the period between May and October, the company reported record growth in the issue of credit cards: up 2.5 times against the previous year, while the total number of credit-card holders passed the one-million mark.

From the client’s perspective, a credit card is the modern way to make regular purchases with a grace period, and it also offers discounts and rewards under various co-branding programs.

Mikhail Mamut, president of the National Partnership of Microfinance Market (NAMMS), believes that Russia has begun to actively recover from the financial crisis. “Whereas, before, the sensible policy was to accumulate funds in one’s account, now the pattern of human behavior is different: lending is on the rise, against a backdrop of increased consumer optimism.”

This increased optimism is reflected by Euroset, one of the most popular retailers of mobile technology in Russia, which has also felt an increase in the credit market. The company now provides various financial services in its stores.

Not only can its users pay utility bills, but they can also take advantage of microcrediting. The retailer notes that, since launching its credit program, it has issued seven billion rubles ($225 million) at an average of 55,000 rubles per microloan. The company approves up to 10,000 loan applications per month.

“Right now, the Russian consumer finance market has great growth potential. But the risk remains that an unforeseen financial event on a global scale could make some borrowers temporarily insolvent,” says Mamut.

The problem could be partially offset by a new federal law on personal bankruptcy, which the lower house of parliament has been considering for some time now. It would force down interest rates on loans, but at the same time tighten issuance procedures.