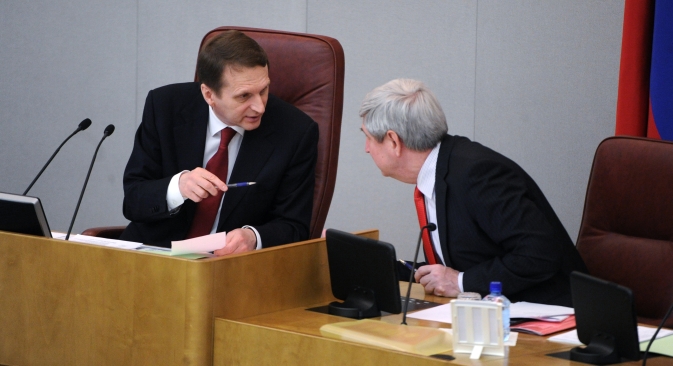 State Duma Speaker Sergei Naryshkin (pictured left) was one of the initiators of the bill retaliating the U.S. Magnitsky Act. Source: ITAR-TASS

By the end of this year, Russia will pass a law in retaliation against the Magnitsky Act. A number of Americans will be barred from entering Russia, and their accounts and property holdings in Russia will be seized. Experts are predicting that this step could provoke a reaction that is the opposite of what is expected.

Russia is passing its own law in response to the Magnitsky Act passed by the U.S. Senate, which bars some Russian officials from entering America. Accounts and property belonging to Americans who find themselves on the Russian list will be seized.

The law is expected to be passed by the end of this year. Experts believe the list will include witnesses in the case against the Russian businessman Viktor Bout (sentenced to 25 years in prison in the United States), legislators who passed the Magnitsky Act, and also judges who have acquitted American parents in cases involving adopted Russian children.

The retaliatory bill was tabled for discussion in the State Duma on Monday, Dec. 10. It was signed by the leaders of the four parties represented in the Duma: United Russia, the Communist Party of the Russian Federation, the Liberal Democratic Party of Russia, and A Just Russia; it was also signed by Sergei Naryshkin, speaker of the Russian parliament’s lower chamber.

The bill is called “On enforcement actions against persons involved in violation of the rights of citizens of the Russian Federation,” but it only concerns citizens of the United States.

If the bill is passed, starting from January 1, 2013, entry into Russia will be barred to six categories of American citizens:

- Those who have committed crimes in relation to Russians located in foreign countries and those who were accessories to such crimes;

- those who hold state office and who have assisted persons who have committed crimes against Russians to evade criminal responsibility;

- those who are accessories to the abduction and illegal deprivation of liberty of Russian citizens;

- those who pass groundless and unjust sentences on Russians;

The list of names will be drawn up by the Russian Ministry of Foreign Affairs. Members of both chambers of the Russian parliament, the Russian Commissioner for Human Rights, the Civic Chamber, political parties and also federal bodies will be able to make additions to it.

Financial sanctions will be applied to people included on the “Russian Magnitsky list”: Their Russian accounts and financial assets will be seized, and they will be barred from engaging in property and investment transactions, including the disposal of Russian property.

Their membership on boards of directors and other management bodies in Russian companies will be terminated, as will the activities of legal entities controlled by Americans. The Ministry of Foreign Affairs will report annually to the deputies and senators on how restrictions have been implemented according to the list.

State Duma deputies will examine the bill at its first reading on Dec. 14, and, according to speaker Naryshkin, they will pass it before the end of the year.

The State Duma is not concealing the fact that the main aim of the law is political retaliation against the Magnitsky Act.

Vladimir Vasilyev, head of the United Russia faction in the Duma, has drawn attention to the fact that the various groups of deputies in the Duma might set aside their political disagreements in order to “take a united patriotic stance.” The Russian parliament is not afraid of complications in relations with the United States.

“Right now we should not be guided by whether there will be complications or not. The Americans have violated both international law and international etiquette and are trying to dictate to us. Anyone the Americans take a dislike to can end up on the ‘Magnitsky list.’ Russia’s position should therefore be unambiguous and appropriate,” Vadim Solovyov, Duma deputy and head of the Communist Party’s legal service, told RBTH.

The politician is convinced that Russia must maintain its prestige.

Vyacheslav Smirnov, director of the Political Sociology Institute, highlights the fact that the Russian list will be secret.

“That means that until you’re refused a visa, you won’t even know you’re on it. Generally speaking, that means they will have taken the decision about whether to deny you one on the basis of this ‘list’ as they go along,” Smirnov said.

It is not known how the Russian Ministry of Foreign Affairs will decide what counts as violations of human rights.

Smirnov estimates that the law will not affect more than 100 people. Americans, on the whole, do not visit Russia much, and they do not have financial or property interests in the country. Any U.S. politician, diplomat or journalist could potentially end up on the list. First in line will be those who voted for the Magnitsky Act, and also witnesses in the Viktor Bout case.

Judges who have acquitted Americans in cases involving the adoption of Russian children could also find themselves on the list, although the parents are not often acquitted.

“But this is pretty much the only area where Americans violate the human rights of Russians,” said Smirnov. The political scientist predicts that the passing of the “Russian Magnitsky Act” will result in only one or two controversial refusals to issue Russian visas, and then everything will go quiet.

Alexei Mukhin, head of the Political Information Center, warns the Russian deputies against passing symmetrical measures in response to the Magnitsky Act.

“I’m firmly convinced that we should not react hastily to this American law. It’s essentially an internal matter for the U.S., and if we focus too closely on it and pass retaliatory measures, it really will become an important political act,” said Mukhin.

The expert also noted that an aggressive response to the Magnitsky Act is exactly what the West is expecting. The U.S. wants European countries to sign the act, Mukhin believes. “A harsh reaction by Russia could lead to the Europeans being frightened into signing this act,” he concluded.