To the moon and back on a Russian spacecraft 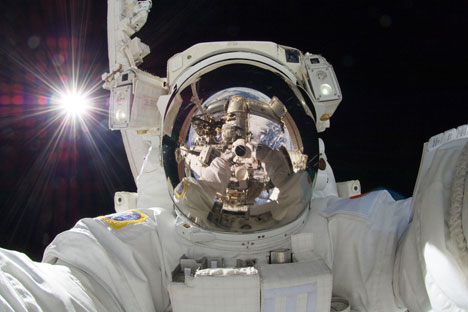 To the moon and back on a Russian spacecraft. Source: Nasa

Private space tourism company, Excalibur Almaz, is retrofitting Russian made spacecraft to offer a ticket to the moon and back.

Got $155 million in spare cash? It could buy you the ultimate getaway – a ticket to the moon and back, and a special place in history alongside the likes of the Apollo astronauts. However, if the moon is beyond your budget, your high-flying dreams don’t have to come to terms with gravity, for, there’s a trip to low-earth orbit that costs just $150,000. That’ll be enough to get you your astronaut – or cosmonaut – badge.

Starting as early as 2015, space tourists may be able to pay their way to the moon on board Russian spacecraft retrofitted by a company based in the Isle of Man. Space start-up Excalibur Almaz has acquired two 29,000 kg space stations built in the 1970s for the Soviet Union's Salyut space station programme and four three-person reusable re-entry vehicles (RRVs) built for Moscow’s secret Almaz military reconnaissance platforms.

The Salyuts are the same spacecraft that formed the core of the legendary Mir space station and now provide a base for Russian crews aboard the International Space Station. Excalibur Almaz is currently refurbishing the spacecraft to get them ready for their first flights.

While the Almaz capsules will be launched by Russia’s Soyuz-FG rocket, the Salyut class space station will ride atop a Proton rocket – both from the Baikonaur cosmodrome in Kazakhstan.

Once in orbit, the space station and RRV will dock and the station's propulsion system – electric hall-effect thrusters being developed by one of Excalibur Almaz’s contractors – will propel the entire system to the moon. And back, of course. However, there won’t be any Apollo-style landings. That would be prohibitively expensive and too high-tech a venture for a private company as yet. Instead, there will be a fly-past of the moon.

“We are planning flights to low earth orbit, the moon and deep space as early as 2015,” Rob Lazaro, Public Relations Director, Excalibur Almaz, told RIR. “The length of flights will depend on the mission and destinations, varying from a few days to months.”

Valery Tokarev, former Soyuz commander and test cosmonaut at the Yuri A. Gagarin Cosmonaut Training Centre, is a consultant to the project. Tokarev, a graduate of the Stavropol Higher Military Aviation School for pilots and navigators, has spent 200 days in space.

A unique feature of the Almaz RRV includes the largest window ever developed for a spacecraft, boasting over two metres of panoramic views of the Earth and stars.

However, the most critical feature is their reusability, which will reduce logistical, overhead and programme costs for commercial access to space.

The RRVs being modernised have been used nine times and were built for at least 15 missions, which means they are good for another six flights. “Our hardware and spacecraft have been to space and back safely over nine missions as well as undergoing multiple ground tests,” says Lazaro. “We are confident our systems and missions will be safe and will take the utmost care to ensure the proper training of our passengers to further ensure safety and mission success.”

The Almaz RRV were developed by Vladimir Chelomei – an outstanding rocket scientist and spacecraft designer – in Soviet-era Russia and have a remarkable history and pedigree.

Designed to carry a crew of up to three, or a combination of crew and cargo, the Almaz RRV was robustly constructed for both ground and water landings. The spacecraft have successfully completed open-water testing by a crew of three commanded by cosmonaut Gennady Sarafanov. The crew remained inside the Almaz RRV for 72 hours during the post-landing test and was successfully recovered from the crew compartment in heavy seas. Durations in orbit ranged from 50 days to 175 days. They were occupied in orbit while docked to the Russian space station to validate life support and habitability features.

Despite deep cuts in funding, Russia’s space programme has an impeccable safety record. While the American Space Shuttle killed more people – 13 astronauts and a teacher – than any other space vehicle in history, “Russia is now seen as having the world's safest, most cost-effective human spaceflight system”, says MSNBC.

Unlike the extravagant Space Shuttle programme – which NASA chief Michael Griffin said was a mistake and “inherently flawed” – Russian spacecraft have done their job quietly and efficiently.

And affordably – the average cost of a Space Shuttle launch was $1.5 billion, whereas the workhorse Russian rocket, the Soyuz, costs between $45 million and $80 million per launch. Pointing to the irony, Forbes magazine said, “This makes the Soyuz both the most capitalist and the least government-funded space transportation option.”

Despite the market research done by the company and the optimism of its owners, the reality is that space tourism isn’t what it is cracked up to be – the actual number of space tourists is quite small, with people deterred not just by the costs but also the risks involved. Space travel isn’t yet 100 percent safe like airline travel.

The company, therefore, won’t be restricting itself to individual customers. It is describing its flights as space expeditions. Lazaro says Excalibur Almaz will tailor space missions to accommodate scientific exploration, cargo transport and microgravity experiments. This has the potential to bring in governments and academic institutions that don’t have access to space launch services.

A bunch of countries are involved in Excalibur Almaz’s venture. Unlike the exclusively government projects of the previous century, today it seems cooperation is the magic word. Excalibur Almaz’s project has become truly international, with support contractors in Russia, Germany, Japan and the US. “This approach has proven both expedient and cost-effective for our company,” says Lazaro.

Russia’s Energiya Corporation pioneered space tourism in 2001 when Dennis Tito of the United States became the first space tourist on a Soyuz TM-32 spacecraft. He paid $20 million for an eight-day ride on the International Space Station (ISS). After the Columbia Space Shuttle disaster in 2003, space tourism on the Russian Soyuz programme was temporarily put on hold, because Soyuz vehicles were the only available transport to the ISS. As Yuri Karash, a space policy consultant based in Moscow, told MSNBC, “It certainly is fair to say that the Russian space programme saved the space station itself.”

Private space flights are at the stage where public airlines were in the 1920s – expensive and not for everyone. Indeed, it is the jet set – like Ashton Kutcher, who has booked a flight on Virgin Galactic for $200,000 – that the space tourism companies are after.

Also, for that price, all that tourists will get is a few minutes of zero-G, where the spacecraft merely skims the edge of space. Tourists expecting a Space Shuttle-like experience are likely to be disappointed.

However, with proven space hardware sourced from Russia, Excalibur Almaz may offer a more generous experience. Others in the space tourism business, such as Space Adventures and Virgin Galactic, will then be forced to offer a better ride.

Costs are bound to fall back to earth once the market develops critical mass. Who knows, perhaps in 15-20 years you and me could be able to afford a trip to the final frontier of tourism.