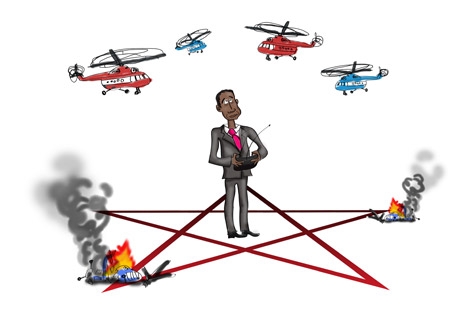 While the sanctions adopted by the U.S. Senate and banning U.S. deals with Russia’s main weapons exporter appear to be a threat to further U.S.-Russian cooperation, the decision may be overturned by strong resistance from the Pentagon and a significant part played by the current Obama administration.

Drawing by Niyaz karim. Click to enlarge the image.

The U.S. Senate has unanimously approved a ban on deals between the U.S. military and the Russian arms company Rosoboronexport. Before this, the decision was approved by the U.S. House of Representatives in July 2012. What do the decisions mean and what might they lead to?

Has the U.S. abandoned all military and technical cooperation with Russia?

No, not yet. The Senate could still be vetoed by President Obama. There are two other salient points. First, military and technical cooperation between Moscow and Washington remains largely inconspicuous (an important exception is detailed below). Second, the sanctions are imposed on a specific company and not the activity itself, which leaves the possibility of adjusting the terms of critical deals still on the table.

Ban on Pentagon-Rosoboronexport deals will not harm Russian exporters - expert

Is the Senate's ruling exceptional?

No ‒ not at all. Russian defense companies regularly come under U.S. sanctions. The last time Rosoboronexport has hit, for example, was after the 2008 war in Georgia. Sanctions were eventually lifted in the spring of 2010.

How do the senators justify their attack?

Mainly thus: in view of Rosoboronexport's cooperation with the "blood-letting regime" of Bashar al-Assad in Syria. That much is true ‒ at least the bit about cooperation. Russia continues to perform its obligations under defense contracts with the country's legitimate government in Damascus.

So, what is the issue?

The scandal surrounding Rosoboronexport was catalyzed by the U.S. military's decision in 2011 to purchase 21 new Mi-17V5 helicopters from Russia, in order to equip the Afghan air force. This was preceded by supplies of second-hand Mi-8 helicopters to Afghanistan that were "obtained" in the Third World by rather murky intermediaries (as it turned out, at prices comparable to those of new vehicles). It is comical that the Senate's official reasoning cited the suffering of the Syrian people, while arguing the need to procure U.S.-made equipment for the Afghan air force.

Who will suffer from the decision?

"I'm not about to make any predictions. It's not set in stone. It represents the opinion of the Senate and has not yet passed all the requisite stages. We are confident that, at the very least, the executive branch of the U.S. government will conclude unambiguously that the idea as conceived by the Senate is contrary to national interests, contrary to the development of cooperation with Russia, and contrary to the objectives that we have set in and around Afghanistan," Lavrov was quoted by RIA Novosti as saying.

Mainly the Pentagon: after all this time, it is still racking its brains over how best to equip and train the Afghan security forces. The Mi-8/Mi-17 is of vital importance in Afghanistan, and it was the U.S. military that sought to purchase the Russian-made helicopters, while the weapons lobby of U.S. congressmen and senators sounded the alarm.

According to official data, the Russian side (chiefly Russian Helicopters Corporation) stands to lose at least $375 million. Rosoboronexport's potential losses are harder to calculate, due to a lack of information about the extent of its intermediary role.

It all adds up to whether or not the Senate's decision is vetoed firmly or softly. In the first case, President Obama will simply fold up the document on his desk (in the form of an amendment to the law on the military budget), and that will be that: the helicopters will make their way to Afghanistan via the Pentagon. In the second instance, sanctions would be officially introduced, but the Afghan deal could be restructured to include companies not subject to the sanctions regime.

A full freeze on the Afghan deal cannot be discounted; but it should be understood that such a decision would be made in the face of fierce resistance from the Pentagon (which has issues to deal with in Afghanistan) and the significant portion of the Obama administration that wants to preserve at least a minimal level of constructive relations with Moscow.

Konstantin Bogdanov is a columnist for RIA Novosti.