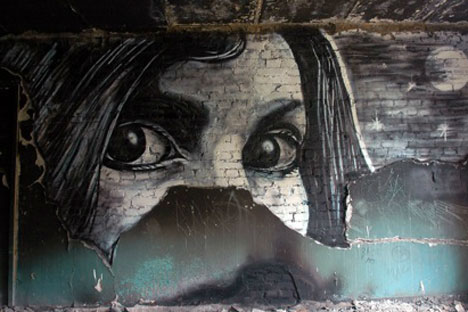 Even Mayor Sergei Sobyanin recently said that graffiti artists should be invited to paint the city's pedestrian underpasses.

Ten years ago, Moscow's graffiti artists operated mostly underground - and were often chased by police less than impressed with their paintings on fences and buildings. Most recently, however, graffiti has become more legitimate; even Mayor Sergei Sobyanin recently said that graffiti artists should be invited to paint the city's pedestrian underpasses.

Today, there are several established groups of graffiti artists in Moscow, most of which are known for their official works. But all of them have roots in the underground culture.

“At the beginning, we got interested in hip-hop culture and began painting on fences,” said Sergei Ovseykin of Zuk Club, sitting in the art group's studio in the former Elektrozavod building. “We were basically kids, attending a secondary school at the time.”

The high-ceiling studio is adorned with works by the group, including a large canvas featuring graffiti-style portraits of Salvador Dali, Andy Warhol and Vincent van Gogh. Ovseykin, a cheerful man in his mid-20s, was wearing a white t-shirt. As he talked, two of his colleagues examined a laptop screen, discussing designs.

According to Ovseykin, back in the 2000s, the area around VDNKh metro station was a sort of graffiti centre, with a store selling graffiti supplies and a wall where painting was officially permitted. However, the city's graffiti community did not limit its activities to the surfaces where painting was allowed. “Of course we painted illegally,” Ovseykin said. “Even today, we have works that are illegal from the officials' viewpoint, but we don't think so. We believe that if we paint on the street, we donate our creative work to the city. I don't see anything illegal in it.”

Over the past decade, Muscovites' perceptions of graffiti have changed: graffiti artists are no longer viewed as just vandals or hooligans. Demand for graffiti-style work has been coming from architects, interior designers, stores, restaurants and even city authorities.

“Today, there is quite a substantial interest in and demand for what we're doing,” Ovseykin said. “And that's one of the reasons why we're working illegally less and less, getting orders instead and executing our projects. Once investments began to arrive, our projects became much bigger and much more interesting.”

Zuk Club currently has nine members and works in various areas of public art and street art. Its members make a strict division between commercial and creative work. “We never attach our name to commercial orders, as [in those cases] we are just used as an instrument,” Ovseykin said. “But in a situation when someone wants our creative work, we sort of develop it and make an input into the art.”

One of Zuk Club's best-known works in the city was commissioned by western Moscow's Fabrika art centre. “Wild Closed Eyes,” which spreads across all three floors of one of the centre's buildings, features a woman holding a telephone to her ear.

A number of other officially approved graffiti projects have been executed in Moscow over the last few years, with residential neighbourhoods also getting a taste of contemporary street art. Several years ago, a team of Russian and Dutch artists painted the facades of 12 Soviet-era apartment buildings on Ulitsa Izumrudnaya in northeast Moscow, turning grim five-story buildings into oversized art objects.

City Hall has also expressed interest in attracting graffiti artists to work for the city. “We began to take city orders long ago, and we still do it from time to time,” Ovseykin said. “But there are restrictions. There are too many ‘buts.' The original design gets curtailed too much, and what we have as a result is a lukewarm picture that pretty much everyone likes, but that's not very interesting for us. That's why we don't really like to work with authorities.”

According to Ovseykin, one of the main obstacles between street artists and authorities is that officials don't always understand artists. “I think selections should be made by younger people, while officials' job is to provide buildings-for instance, those that are slated for demolition or are in poor condition,” he explained. “In Moscow, there is a huge number of dilapidated buildings and walls. There are five-story buildings that are to be demolished in five years from now. If there's a picture on a building like that, it won't upset people who live in it or pass by too much, and we'll see new, interesting projects.”

City Hall's most recent initiative is to allow graffiti artists to paint some of the city's numerous pedestrian underpasses. “I have no objections against [street artists] decorating [underpasses], making them cleaner, lighter and more beautiful,” Mayor Sobyanin was quoted by RIA Novosti as saying at a meeting of the city's youth council last month.

However, Moscow's street art community was divided on the initiative.

“Moscow is an utterly polluted city, and the volumes of visual pollution in it are beyond reason, not to mention other issues,” Moskovskiye Novosti quoted a street artist known as ‘8350’ as saying. “And here comes an initiative picked up by the mayor, who is ready to turn underpasses into advertising tunnels adorned with graffiti - just like a withered rose on a trash pile would look. Are the underpasses going to become lighter and more beautiful because of that? I really doubt it.”

“I'm ready to collaborate, why not?” disagreed artist Dmitry Fomichev. “We just need to discuss conditions.”

Still, street artists agree that they have to collaborate with municipal authorities, especially at a time when there is interest on the part of City Hall. “In one way or another, the city has an impact on the development of [street] art,” Ovseykin said. “Without permission, [graffiti] works are not created.”