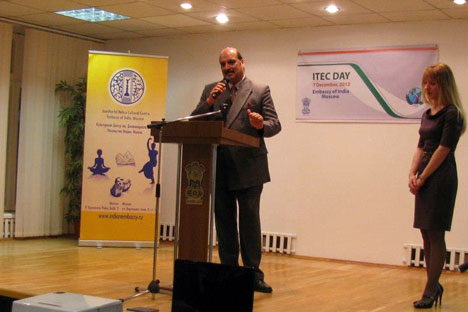 Since 1993, about 1,100 Russians have availed of ITEC training opportunities in different fields in India.

The Indian Technical and Economic Cooperation (ITEC) programme, which was launched by the Indian government about 50 years ago as a flagship programme for economic technical cooperation with foreign countries, has become increasingly popular with the students, scholars and professionals in various fields, in Russia.

Russia joined the ITEC as a partner country in 1993. Since then, about 1,100 Russians have availed of ITEC training opportunities in different fields in India. The wide acceptance and popularity of ITEC programme in Russia is quite evident from the fact that the number of ITEC students, have increased from 2 in 1993-94 to 49 in 2011-12.

Russians are particularly interested in ITEC because the newly emerging managerial cadres in Russia get an opportunity to interact with centres of managerial training in India, focusing on the challenges of the country’s public and corporate sectors.

“ITEC is a very important cooperation programme conducted by the Indian government through the Ministry of External Affairs,” Indian ambassador to Moscow, Ajai Malhotra said at a function organized to mark the ITEC Day in the D.P. Dhar Hall of the Indian Embassy, on December 7.

“It was started on September 15, 1964 and has grown in many ways since then,” Malhotra said. “Now it covers 158 countries of the world. In fact, any country can benefit from the friendship, goodwill and cooperation that we extend through this programme.”

“It is important, not only because of its wide geographical coverage but also because of its innovative ways of technical cooperation in different fields,” Malhotra said. “Being essentially bilateral in nature, ITEC is about cooperation and partnership for mutual benefit,” he added.

India’s first Prime Minister Jawaharlal Nehru was the main architect of the ITEC programme, as a bilateral assistance programme.

Malhotra inaugurated the function with ceremonially lighting the traditional Indian lamp. The solemn ceremony was followed by the presentation of Yoga, classical Indian music and Kathak dance items by the groups of the Jawaharlal Nehru Cultural Centre (JNCC), Indian embassy, Moscow.

A number of Russian students, who recently returned from India after completing their courses, attended the function and shared their experiences during their stay for the courses of their choice in different states of the country.

Under the ITEC, various courses are offered for the duration from few weeks to six months. There are about 120 courses available for the students to choose one of them. Study tours are also organised under ITEC in certain cases.

“I am very happy that India and Russia too cooperate under the ITEC programme,” Malhotra said, stressing that “This programme has a very wide acceptance and popularity across Russia.”

“So far, about 1,100 Russian citizens have benefitted from this programme. Every year, India offers scholarships from 60 to 120 students depending on the demand and availability of the seats in the courses that they try to get,” he said.

“The idea is just to help in small ways to improve the expertise and professional skill of the students,” the ambassador said, pointing out that most of the students have visited India from Russia’s regions outside of Moscow and St Petersburg.

“Whenever I go outside of Moscow and meet the leaderships of the regions and districts, I always do refer to them this programme and we follow up and inform them about the list of courses so that one or two students from one region went to India for the courses, including IT, Hindi and English languages and agricultural farming,” he said.

“The intention is to make this opportunity available to people in different parts of Russia who would like India to know in a particular way through educating themselves in the sphere of interest to them,” Malhotra noted.

He said ITEC has also been of great support in fostering contacts between Indian entrepreneurs and the new generation of Russian decision-makers, whose exposure to Indian management training systems help them benefit from Indian capabilities in the industrial and financial sectors.

“I was very fortunate that I was awarded the scholarship for improving and perfecting my knowledge of Hindi to study in India for eight months,” Elena Kuzmina said, speaking fluently in chaste Hindi. Twenty-year-old Elena had recently returned after completing her course at Kendriya Hindi Sansthan (Central Institute of Hindi), Agra. Elena had started learning Hindi some years ago at the JNCC in Moscow.

“I was provided everything to fulfil my dream of learning and improving Hindi which I cherished from my childhood,” she told. “My teachers were always ready and available to help me. I did not feel a stranger in India and I got all the help from the people from the day when I arrived at airport in New Delhi. I was warmly welcomed in every house like a family member.”

“If you see India from a family angle, there will be no problem in understanding people of India which is quite advanced in many respects,” she said, adding “I will forever remember the love and affection I got from the people of India.”

Elena also recited a poem from the dais in Hindi which she had penned while in India to a long applaud of the audience in the hall.

The Indian embassy in Moscow and the Indian Consulate General in St. Petersburg and Vladivostok interact with various Russian agencies for working out new directions and courses for widening the ITEC course content and covering as many regions as possible.

In Russia, ITEC courses which have proved to be most popular are in the fields of banking, entrepreneurship development, small enterprise management and diplomacy.

In this connection, Russian Foreign Ministry has been taking great interest in the programme, especially emphasizing the importance of ITEC in bilateral relations. In particular, it has played a major role in bringing ITEC programme to the attention of the many regions and republics of Russia, as the quality of ITEC courses is considered to be comparable to those offered by the developed countries.

Russian journalists have been sent to the Indian Institute of Mass Communications for four-month courses on journalism.

Those students who want to learn and perfect themselves in Yoga, Yoga therapy and classical Indian music and dance, the scholarships are provided through the JNCC under the Indian Council for Cultural Relations (ICCR).

Recently, Russia's ITEC participation has been quite enthusiastic, showing the increasing popularity of the programme.

In 1998, about 50 young Russian managers from different regions were invited by specially chosen Indian management training institutions for studies in the vital spheres of corporate and small industry activity. In earlier years, around 142 Russian managers had availed of ITEC courses in finance and investment, banking and entrepreneurial development.

These interactions between Russian managers and entrepreneurs and Indian training institutions necessarily serve to add a new dimension to the traditionally strong friendship between India and Russia and further boost the “special, privileged strategic partnership between the two countries.

“Wherever I have gone, the resonance has been very popular and wherever we have mentioned this course and asked the universities or the local dignitaries or the local governor or the mayor, to suggest one or two names, there has always been a big and positive response. The feedback which we have got has also been always very positive,” Malhotra said.

“Those who have come here to participate in today’s function to mark the ITEC Day, represent about 1,100 students under ITEC itself, besides the additional number who have gone under ICCR and Kendriya Hindi Sansthan,” he said, extending his congratulations to those who recently passed courses through this programme in India.