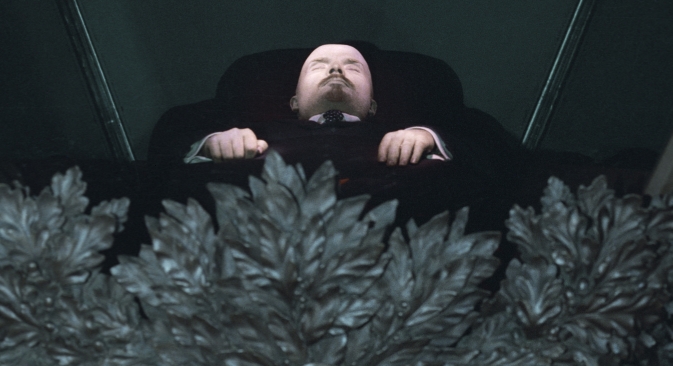 The number of those supporting the idea of burying Lenin’s body has grown 10 percent over the past six years, reaching 56 percent. Source: RIA Novosti

President Vladimir Putin has called for Communist leader Vladimir Lenin’s body to be preserved in its mausoleum on Red Square, comparing the embalmed body of the founder of the Soviet state to the relics of saints.

“Many are saying that having Lenin’s Mausoleum runs counter to the tradition. But what runs counter to tradition?” Putin told a meeting with celebrities who campaigned for him in the March 2012 presidential election, according to the Kremlin website. “Just go to Kiev Pechersk Lavra or check out Pskov Monastery or Mount Athos. You’ll see the relics of saints there.”

Putin cited almost word-for-word the present-day leader of Russia’s Communist Party, Gennady Zyuganov, who last August said that “this form of burying [the body of] Lenin complies with Orthodox canons and traditions” and also drew the Kiev Pechersk Lavra example to back up his point.

Putin also called for “returning to our historic roots,” lamenting a lack of a common ideology.

“What happened after the collapse of the Soviet Union and the dominant ideology?” Putin asked his supporters. “We never got anything in its place.”

Echoing the words of Zyuganov again, Putin remarked that the Communist Builder’s Code, a list of Communist moral principles dated 1961, borrowed a great deal from the Bible and the Koran.

Putin’s comments come as public support for removing Lenin’s body from the mausoleum is growing, a recent survey by the Public Opinion Fund showed.

The number of those supporting the idea of burying Lenin’s body has grown 10 percent over the past six years, reaching 56 percent. Only 28 percent of respondents said Lenin’s body should be left in the mausoleum.

Speaking about the possibility of a Christian-style funeral in 2010 at a meeting of the Valdai club of political thinkers, Putin said that would come “in good time,” Gazeta.ru reported.

“The time will come and the Russian people will decide what to do,” Putin was quoted as saying.

In response to Putin’s comments, a prominent member of the movement “For taking Lenin out” and the abbot of several churches in Moscow, Father Sergius, said that comparing Lenin’s body with the relics of saints was “inadmissible.”

“The relics of saints and the body of a Satanist, dictator and a bloody monster are two different things,” Father Sergius told Interfax. “Putin probably wants to please both sides, but he should make a choice – to build Russia on national interests, or to court the Communists.”

“Putin will undoubtedly lose the support of many Orthodox and Cossack organizations,” Interfax reported Dyomushkin as saying.

Calls for the burial of Lenin’s body grew in the late 1980s, during the period of glasnost and perestroika ahead of the collapse of the Soviet Union, and the controversy has raged to the present day.

Last year Culture Minister Vladimir Medinsky, a member of the ruling United Russia party, argued for burying Lenin, whom he described as “a highly controversial political figure.” “Having him as a central figure in a necropolis at the heart of our country is sheer nonsense,” Medinsky was quoted by United Russia’s press service as saying.