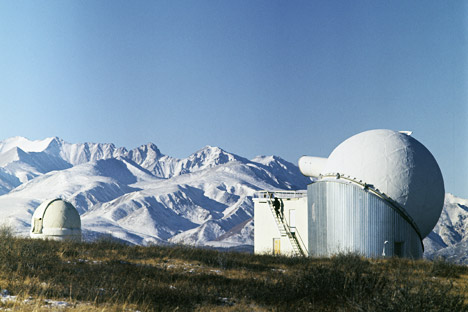 Russia’s space agency Roscosmos is going to develop new tool of surveillance to counter threats stemming from man-made debris scattered in near space.

Roscosmos has invited Russian scientists and experts to develop a system for monitoring space debris and dangerous asteroids. The system will incorporate both military and civilian means of surveillance. Funding for the project could begin as early as in 2014, according to participants in a recent meeting called by the space agency’s Scientific and Technical Council.

“We are talking about developing means of surveillance to counter threats stemming from man-made debris – otherwise known as ‘space junk’ – scattered in near space, said Viktor Shilin, chief designer of Russia’s space control system and an employee of the MAK Vympel Corporation, which has become the project’s system integrator.

“The second purpose is to warn about asteroid and comet threats. The objective is to raise Russia’s profile in solving these international problems,” he added.

Shilin noted that representatives from dozens of entities took part in the Scientific and Technical Council meeting chaired by Roscosmos head Vladimir Popovkin. This included employees of research institutions such as the Institute of Astronomy (INASAN), the Space Research Institute and the Keldysh Institute of Applied Mathematics, in addition to representatives from Roscosmos companies and Ministry of Defense departments.

In particular, INASAN representatives proposed building two telescopes with mirrors approximately 5 feet in diameter. One of the telescopes, code-named the AZT-33VM, is already being installed at the observatory in the Sayan Mountains. The Kometa Research Institute has been developing the Nebosvod project, which involves the launch of two space-based telescopes with reflectors approximately 5 feet in diameter. The International Scientific Optical Network has proposed a relatively cheap asteroid surveillance project using relatively cheap, small telescopes.

According to Shilin, around 30 projects have been proposed in total, complete with feasibility studies and some groundwork already done. The idea is to consolidate all of the proposals into a single systemic project to be implemented by 2020.

“We are talking about several optical telescope networks – dozens of new optical instruments, as well as radar systems based on a number of existing large antennas,” Shilin said.

Shilin pointed out that, unlike previous variants, the new system would not feature a single center to supply all data: “We hope to create a system of distributed centers that will interact with each other and supply information to respective users.”

The project will not only take the military’s interests into account; it will also utilize military technology. The space debris problem, however, is not just a military problem.

He noted that a full-fledged surveillance system should feature observation points spread around the globe. However, the military cannot deploy such means abroad. This is an area in which the Academy could help.

“We can only operate abroad through the Academy of Sciences and Roscosmos. They will negotiate the installation of our equipment at observatories all around the world… We would also like to take advantage of the groundwork laid by the development of optical instruments for the Ministry of Defense,” said Shilin.

Participants in the meeting believe that it makes no sense for Russia to compete with the U.S.; Russia should choose a niche where it might be able to make a substantial contribution to the common cause, and at a relatively small expense.

“We can find a niche, an area for research, where Russia’s voice might be loud enough, given the capabilities it has. We have proposed such areas, both in the space debris and the asteroid spheres,” Shilin said.

One such area could be tracking down asteroids approaching the Earth and calculating their orbits more precisely ‒ something American astronomers do not really handle.

“A considerable portion of newly discovered asteroids gets lost very quickly. They are observed for several days, their orbits are thus calculated very imprecisely; then they are lost, and ‘rediscovered’ again,” Leonid Yelenin, a participant in the International Scientific Optical Network, told RIA Novosti.