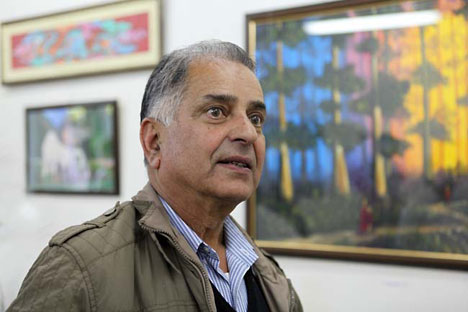 The Slovak national, who was the curator of the museum for over 10 years, was made a scapegoat in order to downplay tensions that emerged between Russia and the Himachal Pradesh government, according to Handa. He said that an audit and inspection of the art work at the estate proved that none of the original paintings were missing and that Adamkova did a lot of good work for the trust.

While Adamkova held the position of curator, the trust was experiencing certain “turbulence,” but the former curator should not be held responsible for that, Handa said. While not placing blame on anybody in particular over the IMRT financial mess, Handa hinted at the direction of a bureaucrat appointed by the Himachal Pradesh government.

A 3-month audit revealed that the estate has 37 Nicholas Roerich paintings and over 8000 artefacts owned by the Roerich family.  The audit was completed in September.

“During three months the researchers examined and registered more than eight thousand items featuring 49 canvases by Nicholas and Svetoslav Roerich and 102 statues of gods and heroes of ancient Indian epics,” the Russian Embassy in New Delhi said. The embassy added that 392 items of memorabilia absent from all earlier registries were now put on record.

IRMT comprises of five Russians and 12 Indians and was founded July 6, 1992, to manage the estate and preserve the legacy of the Roerich family.

Nicholas Roerich, who was the first artist to extensively paint the Himalayas, was inextricably connected with India. His 7,000-odd paintings are on display in reputed art galleries worldwide. He was also a prolific writer and wrote over 30 books including Altai-Himalaya, East and West and The Heart of Asia. Nicholas Roerich was also the architect of the international treaty on preserving the cultural heritage (The Roerich Pact).

His wife, Helena Roerich, gained wide repute as the author of the philosophical system “The Living Ethics”. Their son Yuri was a well-known researcher of Central Asia and the author of the multi-volume Tibetan-English-Russian-Sanskrit dictionary. Their second son Svetoslav was an artist and was awarded the Padma Bhushan, one of India’s highest state awards.