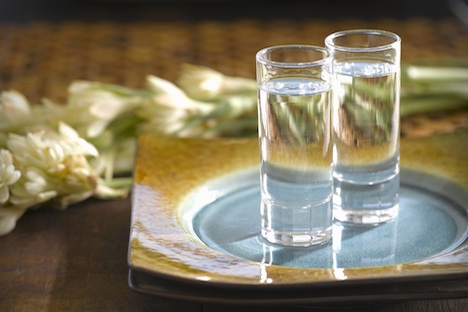 Peter the Great invented the penalty shot – a shot of vodka that those who arrived late for a feast were forced to drink.

People from China to Italy and beyond sometimes deny that it was Russia that gave the world vodka. But the employees of the Vodka History Museum in Moscow are convinced that the drink originated in Russia.

“We believe vodka, or rather homebrew, was invented by the monk Isidor in the 14th century,” says Zhanna Gagarinova, the museum’s administrator. “He was Greek by origin, but it happened at the Chudov Monastery in Moscow. Isidor had a still, but we don’t know where he got it from.”

What he made was known in Russia as “bread wine” for the next four centuries, a name drawn from how the drink was produced: from wheat, rye or barley. The alcohol content could range between 20 percent and 60 percent.

When grain distilleries first opened in Muscovy in the 15th century, Tsar Ivan III created the first state monopoly on the production and sale of “bread wine.” The treasury began to receive a steady flow of money.

This alcohol monopoly went on to be rescinded and reintroduced by his successors, but no ruler ever doubted its profitability.

“In the early 16th century, Russia began selling ‘bread wine’ abroad – to Sweden and Livonia. As for the locals, from 1533 they could only buy vodka in taverns and pubs. A container carried 12.3 litres, and it was sold like that up to 1885,” Gagarinova said.

A good many of today’s drinking traditions are rooted in Russia’s tsarist past. Peter the Great, a reformer, invented the penalty shot – a shot of vodka that those who arrived late for a feast were forced to drink. In fact, when he organised feasts, the penalty shot came in the form of a 1.5-litre goblet named the Big Eagle.

“You were supposed to down it in one,” Gagarinova explained. “Foreign dignitaries usually attended the tsar’s parties with a back-up. Just in case one of them had to drink, and then passed out for the remainder of the party, the other person could discuss politics and important state affairs.”

However, it was Peter the Great who, in 1714, instituted a cast-iron “medal” for drunkenness. “It was attached to a chain that drunks were forced to wear and weighed 6.8 kilograms. They could not take off the mark of shame by themselves, and usually had to wear it for a week. Sometimes the punishment term was extended,” Gagarinova said.

Historians maintain that the first mention of the word “vodka” dates back to a decree by Elizabeth I, but it is thought the general public started using the term in the mid-19th century.

All strata of Russian society, except for the nobility, had to buy state-produced vodka. “Catherine the Great permitted the nobility to brew it – but only for personal consumption,” Gagarinova explained. “Homebrewed vodka was often infused with herbs, berries and fruit.”

In 1894, Russia patented its national vodka as a charcoal-filtered alcoholic beverage with an ethanol content of 40 percent.

“Many people think that vodka was invented by the famous chemist Dmitry Mendeleyev. Allegedly, he determined that alcohol was at its ideal strength at 40 percent,” Gagarinova said. “In reality, he was more interested in alcoholic solutions and their properties. He never tried to improve the combination of ingredients in vodka. Moreover, he defended his thesis in 1865, and the vodka patent was received later – in 1894.”

Prohibition was first imposed before the October Revolution. In 1914, during WWI, Tsar Nicholas II issued a decree banning the production and sale of alcohol.

When the Bolsheviks came to power they extended this law, and punished those who broke it with revolutionary zeal. Execution by firing squad was not considered extraordinary. Lenin was not a vodka fan: he preferred dark beer from Munich and continued to import it from Bavaria even when his country was in the grips of famine.

“People were even shot for excessive drinking. Sometimes other measures were used as well. Campaigns were conducted to promote a healthy lifestyle and alcohol abuse was likened to syphilis and TB. Sometimes a consignment of vodka was destroyed in front of the workers,” Gagarinova said.

The workers could breathe a sigh of relief in 1923, when alcoholic beverages were again freely available in the Soviet Union.

Six years later, in 1929, schoolchildren were standing at the gates of factories and plants with posters reading, “Dad, don’t drink,” or “Dad, bring your wages home!"

Josef Stalin did not reinstate prohibition, but he did launch a campaign against excessive drinking. Yesterday’s taverns or pubs were turned into alcohol-free tea houses. The magazine Sobriety and Culture was launched. It had a good run – and was shut down in 1997 due to a lack of subscribers.

On May 17, 1985, the Soviet people learned of a decree to combat excessive drinking and alcoholism and eradicate home-brewing. It was given nationwide media coverage – the text was published in newspapers, and broadcast on TV and the radio.

Mikhail Gorbachev immediately became the butt of jokes, and the title General Secretary became “Mineral Secretary” (after mineral water). From Brest to Vladivostok, the entire nation lined up for vodka which could now only be bought at particular times of day with special coupons.

“There were enormous lines at liquor stores. People went crazy in these lines. Scuffles and minor breaches of the law were common. Everyone was entitled to two bottles of vodka per month,” Gagarinova said.

People started drinking brake fluid and spreading shoe polish on bread. Wineries were bulldozed from the Crimea to Kuban. The state treasury was losing billions of roubles.

Three years later it was clear that this push for universal sobriety had to be delayed indefinitely.