Stability of Assad's regime crucial for the Middle East 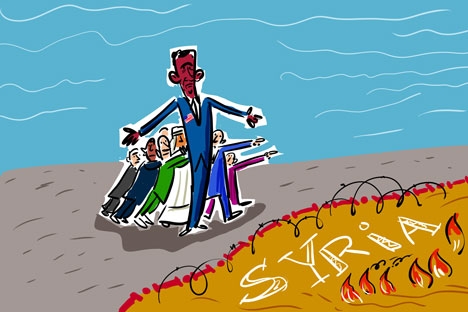 Assad’s obstinacy, the relative neutrality of the U.S., and Russia and China’s refusal to use force to resolve the crisis have all created a stalemate in Syria that is being watched closely by the West, Turkey, Israel and the Sunni monarchies. Decisive action by any of the parties may trigger an aggravation of the situation in the entire Middle East.

There are signs of a new twist in the civil war in Syria. At a conference in the Qatari capital of Doha, the Syrian opposition announced the formation of a Syrian National Coalition (SNC). Now the external forces standing behind the Syrian opposition have a pretext for a repeat of the Libyan scenario, by first declaring the SNC to be the “legitimate Syrian government.”

True, the Arab League has not yet gone that far; it has merely recognized that the coalition legitimately expresses the interests of the opposition.

By contrast, all six monarchies of the Gulf Cooperation Council (GCC) have declared the SNC to be a legitimate representative of the Syrian people. They were promptly joined by France, which was the first to recognize the Libyan opposition. France had launched unauthorized military actions against Qaddafi forces, thus dragging other NATO countries into the war.

However, this does not seem to be a viable option this time round. The Rafales and Mirages cannot reach Syria, and Francois Hollande will hardly risk sending his only aircraft carrier to Syrian shores. France’s carrier-borne aviation consists of 23 Dassault Rafale M-F3 jets and between 30 and 40 very outdated Super Etendards. This is not enough to counter the Syrian Air Force and air defense.

It is obvious, though, that Hollande, the Arab kings and sheikhs are waiting for the U.S. to start a war against Assad. After winning the election, Barack Obama now seems to have a free hand; but Washington has shown little enthusiasm so far, confining itself to political support of the Syrian opposition.

Everyone is waiting for the rebels to destroy the Assad regime without an open external intervention. However, NATO does see military invasion as an option. This is why the rebels constantly attack Syria’s air defense assets. The opposition itself has very little to gain from it. It is quite obvious that these attacks are being launched on orders from the outside, so as to remove factors that may impede an invasion.

However, the conditions for an invasion, including the destruction of the air defense system and a collapse of the armed forces, have yet to arrive, so the war continues as a civil war.

Meanwhile, the Israeli leadership is seriously preparing to strike Iran in order to open up the rear. Hamas is thought to be one of Teheran’s main resources for delivering an asymmetric strike against Israel. But the Israelis have closed that issue for the foreseeable future by destroying the group’s military infrastructure and their stockpiles of rockets. Simultaneously, the risks in solving the main task of destroying Iran’s nuclear infrastructure have been reduced.

Objectively, however, Israel’s air force can only accomplish so much. Thus, Tel Aviv would very much like to see the Americans do part or, better still, all of the work in Iran.

The U.S. president has shown no enthusiasm in that regard. Indeed, the Americans went out of their way to prevent an Israeli land operation in Gaza. They also announced that the repair of the Nimitzaircraft carrier, which was to arrive at the Persian Gulf in January 2013 to replace the Dwight D. Eisenhower carrier, is being postponed until at least the summer. Thus, only the John Stennis aircraft carrier will remain in the region in December 2012-January 2013. It would take at least three aircraft carriers to deliver even a limited strike on Iran.

Maybe the reactor of the Nimitz, which will be decommissioned in 2018, is in need of repair. Or perhaps Washington is giving a signal to Tel Aviv that an unsanctioned strike on Iran (like France’s strike on Libya) is not an option.

Obama does not have to think of re-election, his hands are not tied and he will be even more inclined to stay out of any wars and conflicts since he does not have to watch the conservative Republicans over his shoulder. The U.S. will be focusing on East Asia and containing China. All the hopes entertained in Paris, Riyadh, Doha, Ankara and Tel Aviv that the Americans are about to declare war on Syria and/or Iran seem to be groundless.

On the other hand, it is hard to imagine that the situation in the Middle East will be resolved without a major war: The situation in the region is too tense and the outcome is anything but certain, unless the U.S. steps in. Egypt, which has the strongest armed forces in the Arab world, is unlikely to fight on the side of the monarchies.

The monarchies’ own armies are very well equipped, but dying in a real bloody war was the last thing their soldiers were thinking about when they volunteered to serve in the forces. The European NATO countries, as the Libyan lesson has shown, can only make a limited contribution to an air operation, while having feet on the ground is out of the question. In this situation, Turkey would be reluctant to make a fool of itself and go it alone.

So, the stability of the Bashar Assad regime becomes the crucial factor. The Syrian leader, incidentally, is not out to destroy his own people, as the West and, amusingly, the medieval Arab tyrannies led by the Wahhabite Saudi Arabia would have us believe.

He reflects the interests of many of the Syrian people: in the first place, the minorities (Alawites, Christians and Kurds), who, between them, account for nearly half of the population. Besides, the Syrian leadership has correctly judged the external situation and has not succumbed to gut fear of the “all-powerful” NATO.

The key factor is that psychological stability is impossible without a powerful army, even if its weaponry may be largely outdated. This is an important Syrian lesson.

Alexander Khramchikhin is the deputy director of the Institute for Political and Military Analysis in Moscow, Russia. The opinion is first published in Russian in VPK Daily.