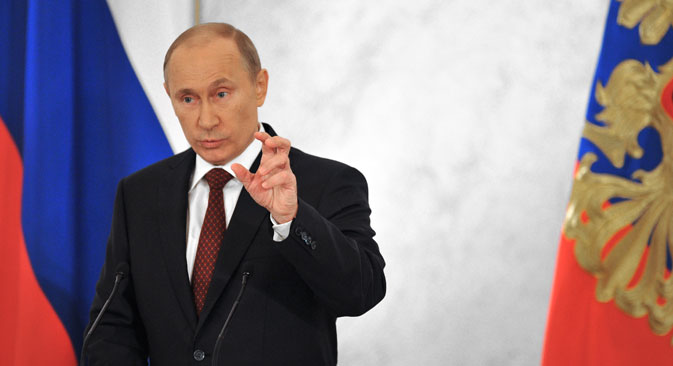 Vladimir Putin's address to Federal Assembly: "Russia should be a sovereign and influential country in the 21st century in a new economic, civilization, and military situation." Source: RIA Novosti / Mikhail Klimentyev

Political analysts are impressed by President Vladimir Putin's first state of the nation address to parliament in four years. They note that, in his speech, Putin explained why he returned to the presidency for a third term. Critics, meanwhile, argue that the address was bereft of new ideas.

Politicians and experts shared their opinions with RBTH on President Vladimir Putin's annual state of the nation address to the Russian parliament – his first after his re-election to the Kremlin this year. Above all, experts picked up on the theme of national and spiritual preservation, noting that changes in the political system could be imminent. Critics, however, believe that they have heard it all before.

Director of the Center for Current Politics, Alexei Chesnakov, remarked that the presidential address was “apt and organic,” and largely determines the agenda of the upcoming six-year presidential term. “It was important that the address delivered precise signals and targeted different audiences (doctors, teachers, armed forces) and ideological groups. Both liberals and welfare dependants saw something in it for them,” said the analyst.

In his opinion, the message was one of values: it highlighted moral standards, which, according to Putin, need to be taken into account in moving forward. “The address clearly expressed a desire to save the people that Alexander Solzhenitsyn wrote about,” Chesnakov said, putting his finger on the key message.

Dmitry Orlov, general director of the Agency for Political and Economic Communications and a member of the Public Chamber, fully agrees: “The pivotal idea is to preserve the people.” Orlov noted the appeal in Putin’s speech to the creative class, as well as the discourse on the development of the middle class and the role of provincial intellectuals.

“Putin has heard society's call to revive moral values and strengthen patriotism. It was a message of values,” said Orlov.

Experts also noted the impending political reforms to which the president made reference – in particular, the proposed return to a mixed electoral system with single-seat electoral districts, while retaining elections by party lists. Chesnakov pointed out that a return to a mixed system was discussed long ago. “The need for this kind of reform is tied up with the change in the number of parties and the restoration of gubernatorial elections,” he said.

Dmitry Badovsky, head of the Institute of Socio-Economic and Political Studies, believes that a return to single-seat districts completes the logic of political reforms that have been carried out in recent years. The new system of elections logically continues the transition to gubernatorial elections, the establishment of the new rules of the Federation Council, and the liberalization of party legislation.

“People want to elect members of parliament for themselves. They need to see their deputies in the flesh. This will improve the quality of the State Duma and force parties to get moving and update their membership, because, at the moment, new people are not always able to get in the party lists,” said Badovsky.

Orlov believes that the new electoral system could provide for a broad coalition of interests. This approach benefits charismatic politicians and the active part of the protest movement. “No one is banning criticism of the government or the right to join groups or be an autonomous player,” said the analyst.

Chesnakov mentioned that Putin proposed a discussion of the possible return of voting blocs in elections. “There will need to be an understanding of the rules for creating such blocs, and how many parties can form them — two, three, six, or more? Will there be a separate electoral threshold for voting blocs, distinct from the one for single parties? The next parliamentary elections are expected in 2016, so it's way down the line,” said Chesnakov.

Not everyone was quite so optimistic about the content of Putin’s address. For Sergei Reshulsky, deputy leader of the Communist Party faction in the State Duma, there was nothing new. “It was a rehash of previous messages delivered by Putin and Medvedev. I didn't hear anything to suggest that the country would actually start developing,” said Duma deputy.

Reshulsky was particularly surprised by the desire to once again tinker with the electoral law. “That means we have to admit that party-building has failed. For me, the speech was high-flying rhetoric, nothing more,” said the Communist deputy leader.

“It was the most forceful address ever delivered,” said Badovsky, strongly disagreeing with Reshulsky’s opinion.

The address looked well beyond even Putin’s next six-year term, since the Russian leader talked about the country's future after the coming global changes.

“The fundamental question is whether Russia can come through these turbulent times with its identity intact. Will it still be Russia? It hinges on the ability of the government and society to work together, and will determine the future of the entire country for decades to come,” said Badovsky.

Putin, he noted, did not speak in the language of decrees and orders, but in the language of values ​​and substance. “In fact, he answered the question that has been on everyone's lips for the past year: why did he return to the presidency?” Badovsky said. “He explained why: so that Russia remains Russia.”