Alexánder Panov
based on Interfax 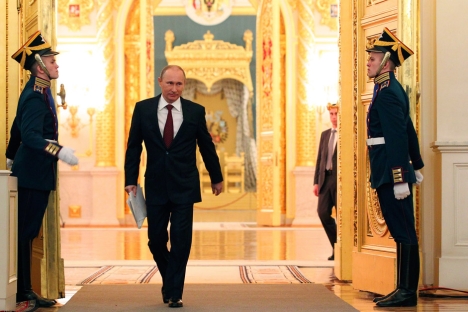 Russia's President Vladimir Putin walks in before making his annual state of the nation address at the Kremlin in Moscow on Dec. 12. Source: Reuters / Vostock Photo

Russian President Vladimir Putin discussed migration, the economy, the food market and other aspects of the country's domestic policy in his annual address to the Federal Assembly on Dec. 12. Experts have mixed feelings about Putin's speech.

Russian President Vladimir Putin outlined major political and economic priorities for the country in his annual address to the Federal Assembly on Dec. 12. The list of issues raised by the president ranged from migration policy, naturalization of citizens from the former Soviet republics, to election system, corruption, trade and development of Russia's Far East. Although experts agree with most of Putin's proposals, they argue that Putin's recent address lacks fresh, new ideas.

Effective migration control is a top priority for the Russian president, who supported stricter penalties for unlawful migration in his speech. "I think it would be grounded and necessary to tighten punishment of illegal migration and violations in migrant registration," Putin said.

On the other hand, Putin supported citizens of the former Soviet Union who seek to obtain permanent residency in Russia and renounce their current citizenship.

"I order the elaboration of a procedure for accelerated naturalization of our compatriots, bearers of the Russian language and culture, direct descendants of people born in the Russian Empire and the Soviet Union," he said. "Russia needs fresh forces – educated and industrious people who want to move to Russia and deem it their motherland. Existent rules do not help them. Rather, they have the opposite effect. Naturalization of our compatriots – people close to Russia culturally and spiritually – is difficult and wickedly bureaucratized."

Putin also declared the importance of boosting the investment appeal of Russia's Far East by the end of this year. "The government must work on these measures in detail, including tax breaks for so-called startups, new businesses, and plans to develop energy and infrastructure by the end of the first quarter of next year," he said.

The president expressed his concerns on the food crisis and outlined a strategy on how to deal with it. Russia needs to be fully independent of food imports and should become a major food exporter in the future, Putin noted

"Russia accounts for more than half of all fertile soil on the planet – 55 percent," Putin said. "In the next four to five years, we should fully guarantee our independence in all principal types of food. Then Russia should become the largest food exporter in the world. This will open colossal new opportunities for us."

Further, Putin asked the government to draft proposals on scaling down the role offshore companies in the Russian economy. He stated that, by some estimates, 9-out-of-10 major transactions concluded by major Russian companies, including government-related ones, are not regulated by Russian laws. Putin stated that offshore firms have to be made transparent: they must disclose tax information like they do in many countries during the negotiating process with offshore zones, with the signing of relevant agreements.

The president talked about the country's political system and its reform, in terms of a growing number of political parties. "The government should and will seek the provision of equal access of all political parties to the media," said Putin. The rule applies not only to the election campaign, but also "to everyday life."

"We must understand that this task is not easy: We had seven parties in the beginning of this year," he said. "I think we have 48 parties now, plus over 200 organizing committees; but the authorities should seek the equality of each of them."

In addition, Putin outlined the main priorities of Russia's foreign policy.  "In the 21st century, Russia's development vector is directed eastward," Putin said. "It's an opportunity to take a good place in Asia and the Pacific."

"The address does not contain fresh ideas," Pavlovsky told Interfax. "It is inertial, which means it is based on the principle ‘we have done this and that and we will carry on this work.’"

Still, the expert found a number of positive aspects in Putin's address.

"The return to the mixed system in the election of the State Duma has its cons and pros, but it is good that the theme will be debated," said Pavlovsky. "It is bad that this has not been done before."

Likewise, Igor Yurgens of the Institute of Contemporary Development argues that "the address contains many progressive ideas, among them the mixed system of the State Duma election."

"There are people who do not want to join parties but who actively take part in regional life," Yurgens said. "Besides, there is an idea to elect senators, and this is a very progressive step."

Mikhail Kasyanov, co-chairman of the PARNAS opposition party and former prime minister, also agrees with many proposals made by Putin.

"A significant part of Putin's speech was predictable," Kasyanov told Interfax. "Just a year ago, I said that he would start using liberal rhetoric. And as far as the economy is concerned, Putin assumed the position of liberal-democratic development. It is good that it was recognized that the economic model based on raw materials has been exhausted and that competition should be the main thing, and that Putin is against state capitalism."

Moreover, Kasyanov praised the fact that, in his message, Putin emphasized the renunciation of the accusatory tendency in the judicial system.

"One can also positively evaluate his promise to think of the possibility of setting up election alliances, as well as the declaration that all parties should be guaranteed access to the media. These are two positive aspects of the political part of the message," he said.

Still, Kasyanov raises eyebrows at the question of implementing these ideas.

"Many good and important words were said, but they were only words. Let's live and see how everything is going to be implemented, especially since Putin demonstrated a clear deficit of resolution to change the political direction fast," said the former prime minister.