Russia bets on its ‘Pacific Vegas’ 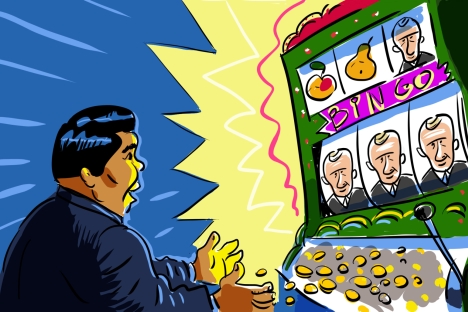 While President Barack Obama has spoken often of the United States’ “pivot” toward Asia, this has been a central plank of Russian geopolitics since Putin’s rise to power in 1999.

Amidst summits, multi-billion dollar energy deals and growing security cooperation with Beijing, a significant role may also be played by plans to establish a Las Vegas-style gambling complex outside Vladivostok.

The proposals date back to 2009, when Putin’s government banned organized gambling throughout the country, except for four particular regions: Vladivostok in the Russian Far Eastern Maritime Region, the Kaliningrad exclave to the west, Azov City in the southwestern Rostov region and Altai in Central Asia.

They were strategically chosen as being both well placed for current or potential markets and also needing further diversification and development. It is no accident that they are all on or close to Russia’s borders, as the expectation is that these will become magnets for foreign tourism and investment.

The hope is that Kaliningrad can become a European leisure center, while Azov City looks to Ukraine and the Middle East. The Altai Republic, between Kazakhstan and Mongolia, is envisaged more as a scenic tourist destination with added gambling, and one which in due course could appeal to the moneyed elites of both China and Central Asia.

However, priority is being given Vladivostok, chosen to cater for an Asian gaming market worth $34.3 billion in 2010 and growing fast. After all, while the Maritime Region is under-populated, it is close to China: an estimated 400 million people live within a one-hour flight.

The plan is that the first five casino hotels will have been built by 2016 at the new Ussuri Bay Resort at Muravyinaya Bay, near Artyom, northeast of Vladivostok itself. By 2022, there are to be 16 new hotels, a yacht club, shopping malls, golf links, artificial beaches and all the other glitzy accessories of a new “Pacific Vegas.”

Some $2 billion are to be spent on this, with $625 million in investment capital reportedly already raised.

For the moment, this is very definitely a state-led project. Nash Dom-Primorye, the Maritime Region’s housing and development corporation, is the primary developer. Generous tax breaks are promised to help lure international casino groups and five have already expressed an interest in joining the project.

This is unlikely to be as smooth or easy a process as policymakers in Moscow and Vladivostok seem to assume. Already there has been some scaling back; initial plans appeared to envisage 12 casino hotels being ready by 2016, instead of the five now being discussed.

Besides which, Russia’s track record with major civic projects is scarcely impressive. Indeed, the construction for the APEC summit in Vladivostok in September 2012 saw some $470 million misused, according to the Audit Chamber.   Likewise, two luxury hotels and a new opera house that were to be ready for the summit were delayed.

Nonetheless, there are many players with a strong interest in getting this new project up and running. To the Maritime Region’s leadership, it is a prestige project that could help diversify the local economy away from its current dependence on energy, fishing and industry.

According to some projections, it could eventually be worth $5.2 billion a year, and Governor Vladimir Miklushevsky is banking on spinoffs. He has noted that “in the modern tourism business, income from the gambling zone itself accounts for 30 to 40 percent of all tourism revenues. The rest comes from other sources, such as amusement parks and shopping centers.”

He hopes that the project will in due course attract 10 million tourists a year, mainly from abroad, around one-quarter of the number who visit Las Vegas. This could stimulate wider development. If, for example, just one in 10 is induced to also undertake some local travel in the Maritime Region, that would provide sufficient business to turn around its unprofitable and subsidized short-haul air transport.

However, the project is especially important to Moscow. Aware that the Russian Far East continues to suffer serious problems of under-population, Chinese competition and high food and energy prices, this offers the chance of generating new forms of economic activity. Moscow wants not only to be able to scale down the federal subsidies it provides, but also to create its own economic hub on the Pacific.

The Ussuri Bay Resort may seem relatively insignificant compared with such initiatives as the $13 billion liquefied natural gas plant and export terminal to be built at Vladivostok, and Rosneft’s $6 billion refinery at Nakhodka, to the east. However, it should instead be seen as part of an overall strategy to remodel not just the economy of the Russian Far East but its image and place in Asia.

In its own way, it is a strategic project to match the creation of a new campus on Russky Island for the consolidated Far Eastern Federal University. Both are explicitly looking toward Asia. At least 10 percent of the university’s 25,000 students are to be drawn from Asian countries, for example. Both are also investments in new kinds of activity for the Russian Far East, ones based on knowledge, creativity and recreation.

Ironically, this is a project which can even enthuse the underworld. Such major developments inevitably offer organized crime numerous lucrative opportunities.

Embezzlement and fraud in the construction process can give way to laundering money in the casinos, loan-sharking to desperate gamblers and selling sex and drugs to visitors on the side. There have already been contacts between Russian gangs and their counterparts in Las Vegas largely devoted to learning how best to manage such underworld economies.

However, the gangs of the Russian Far East have had a singular lack of success in talking to the Chinese gangs that dominate Macao, the Ussuri Bay Resort’s most immediate competitor. Macao has overtaken Las Vegas as the world’s capital of gaming – it brought in $33.5 billion in 2011 – and is jealously seeking to protect its current status. Its gangsters are likewise reluctant to share their best practice with new competitors.

This is, in a way, a microcosm of the new economic and political relationships in Pacific Asia. Russia increasingly obviously sees the massive opportunities in the East and wants to redefine itself as an Asian nation as much as a European one.

This will inevitably connect it to dynamic and expanding economies, and potentially win Moscow something it has lacked for a long time, soft power and economic credibility in Asia. Inevitably, though, in the process it will find itself competing with interests who may be threatened by its successes. Putin’s administration is just as much a gambler in the Russian Far East as the punters he hopes will flock to the new “Pacific Vegas.”