The U.S. seeks further cooperation with Russia on arms disposal 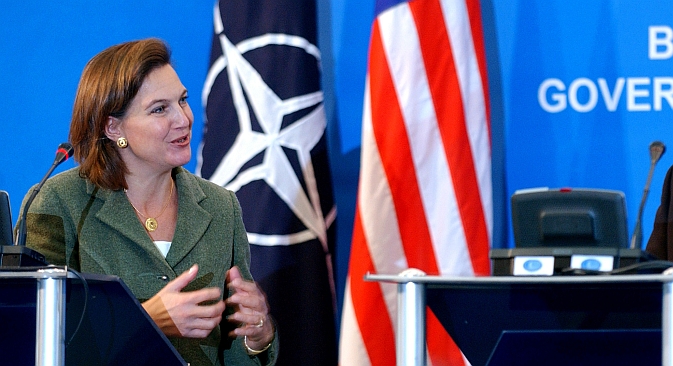 The United States is trying to persuade Russia to continue cooperation for the disposal of nuclear and chemical weapons under the Nunn-Lugar program, which expires in mid-2013. Moscow, however, is reluctant. Viktor Litovkin talks about why Russia opposes a renewal of the agreement that has proved useful over for the past 20 years.

The United States is trying to persuade Russia to agree to continue the Nunn-Lugar program, which is also known as the Cooperative Threat Reduction Program. The topic was even mentioned by U.S. President Barack Obama at a recent conference on non-proliferation in Washington. One of the authors of the program, Sen. Richard Lugar, flew to Moscow this summer to meet with military experts and colleagues from the State Duma.

America's desire to prolong the program, which began back in 1992, was also affirmed in mid-October by U.S. State Department spokesperson Victoria Nuland. She noted that the program is due to expire in June 2013.

"For this reason, we have begun negotiations with Russia to extend the agreement in July. The talks are still in progress. The Russians have told us that they want to review the agreement, and we wish to discuss the options," Nuland said.

In the two decades of the program's existence, thousands of nuclear warheads and large stockpiles of chemical weapons have been destroyed. "In the period 1992-2012, the U.S. spent $8.8 billion on the Cooperative Threat Reduction Program," said the director of the Center for Public Policy Research, Vladimir Yevseyev.

"The program has greatly contributed to Ukraine, Kazakhstan, and Belarus renouncing their nuclear status," said Yevseyev.

But if all is well, why does Moscow refuse to put pen to paper?

Formally titled the Soviet Nuclear Threat Reduction Act of 1991, the Nunn-Lugar program was approved by the U.S. Senate in 1991. The purpose of the program was not to offer charitable aid to Russia to help reduce the huge stockpiles of weapons of mass destruction the country had inherited from the Soviet Union after the Cold War. The goal was not even to insure against unforeseen contingencies.

The program had a pragmatic and specific objective: to protect the U.S. from any uncontrolled deployment of these terrible weapons and, even more so, to prevent them from falling into the hands of international terrorists.

Therefore, the U.S. willingly funded the program, so as to significantly reduce the potential threat to its national security. This generosity, however, turned into stubborn foot-dragging when it came to weapons that were no longer combat-ready and posed more of a threat to Russia.

Today, despite its efforts to extend the Nunn-Lugar program, the U.S. is simultaneously aggravating relations between Moscow and Washington. The U.S. has adopted the Magnitsky Act, holds Russian citizens in jail on unfounded accusations, and attempts to instruct Russia to respect human rights.

The U.S. is offering to negotiate a further reduction of nuclear weapons – including tactical ones – while keeping nuclear weapons on foreign soil in Europe (unlike Russia), ready to be carried on board F-16 bombers under NATO command.

All of this creates an unfavorable backdrop for the conclusion of a new agreement on the Cooperative Threat Reduction Program.

"Our American partners know that their proposal is not consistent with our concept of how further cooperation should be aligned," reads a statement by the Russian Foreign Ministry on the proposal for extending the program.

"The agreement does not particularly suit us, given the new realities and Russia's considerably increased financial capability," Deputy Foreign Minister Sergei Ryabkov explained. "Moreover, much of what the Nunn-Lugar program sought to address has been resolved and no longer exists as a problem."

Essentially, Russia has made it clear to the U.S. that it has no intention of backing out of international cooperation on the non-proliferation and decommissioning of weapons of mass destruction. But Russia plans, in the future, to determine for itself what needs to be eliminated and what, potentially, can remain.

In recent years, Russia has significantly increased budget spending on its disarmament commitments. For example, more than $7 billion has gone toward the decommissioning of chemical weapons and nuclear submarines alone. According to Ryabkov, this circumstance entitles Moscow to insist on equal and mutually beneficial cooperation in matters of disarmament.

Russia aims to see through its projects under the Global Partnership against the Spread of Weapons and Materials of Mass Destruction – but not to the detriment of its own national security. After all, one of the arguments against a renewal of the Nunn-Lugar program is the fact that it provides the U.S. with too much "sensitive information" on Russia's strategic nuclear deterrent.