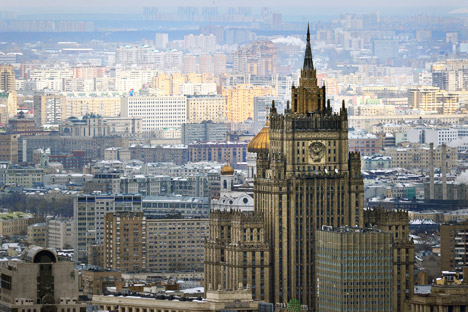 Russian Foreign Ministry wants Russia to become a balancing factor in conditions of "global turbulence" in the development of global civilization.

According to the Foreign Policy of the Russian Federation drawn up by the Russian Foreign Ministry, Russia should become a balancing factor in conditions of "global turbulence" in the development of global civilization,Kommersant Daily reported on Friday.

"In comparison with 2008, the authors of the new document see the world as more 'unstable' and 'unpredictable.' The factors that make it this way are described in the section Modern World and Russian Foreign Policy," Kommersant, which has a copy of the document, reported.

Among these factors are the global crisis, which is "a powerful catalyst of deep changes in the geopolitical landscape," interference by the West in the affairs of other countries, the weakening of the role of the UN, which is manifested in attempts to "regulate crises by using unilateral sanctions and force" bypassing the UN Security Council, "arbitrary interpretation of its resolutions," "implementation of policies aimed at overthrowing lawful regimes," the strengthening of transborder challenges and threats, where "threats in the information space" are for the first time mentioned as key items.

Finally, the fifth instability factor is "the tendency towards the re-ideologization of international relations," Kommersant reported.

"In a situation of global turbulence and growing mutual dependence of countries, attempts to build individual 'havens of calm and security' have no prospects," the authors of the document said.

Nevertheless, Russia is given "the unique role of a balancing factor in international affairs and the development of the world civilization, which has taken centuries to form," the document says.

Russia will build its foreign policy in accordance with this super-mission, Kommersant reported. The authors of the report believe Russia has several goals, and the main goal is to help save the world economy, for which Russia "intends to actively promote the formation of a fair and democratic global trade-economic and currency-financial architecture," the document says.

In addition, Russia should fight interference in countries' internal affairs. To do that, Russia "will seek respect for human rights and liberties […] with regard for the national, cultural, and historical characteristics of every country" and prevent the use of new technologies in the Internet for these purposes," Kommersant quoted the document as saying.

Russia's third role, according to the document, is to defend the "no-alternative role of the UN" to prevent "military interventions and other forms of interference" from taking place under the pretext of "responsibility to defend," as happened in Libya.

Russia intends to use "soft force" to fulfill these tasks, Kommersant reported.

In addition, emphasis has been shifted in the section Regional Priorities, Kommersant reported. Specifically, the document calls integration in the post-Soviet space an absolute priority for Russia's foreign policy.

Special attention is given in the document to the CIS, the Customs Union, the EurAsEc (and the future Eurasian Economic Union), CSTO, and the Union State of Russia and Belarus. Russia is also hoping to "involve Ukraine in "deeper integration processes," Kommersant reported.

Russia's second top priority is the European Union (special emphasis is on the introduction of a visa-free regime).

"The document calls Germany, France, Italy, and the Netherlands, i.e., the countries with which Russia is actively working in the gas sphere, Russia's major partners in Europe. The document also mentions cooperation with the OSCE, NATO, the countries of Northern Europe, the Baltic states, and the Balkans," Kommersant reported.

The third top priority of Russia is the U.S., from which Russia will seek "legal guarantees that the missile defense systems will not be targeted against Russian nuclear restraint forces" and "the observance of international law, including the principle of non-interference in countries' internal affairs," Kommersant reported.

In the meantime, the document calls the development of "friendly relations" with China and India "an important area of Russian foreign policy.

"Asia and the Pacific is declared 'the most dynamically developing geopolitical space,' where the gravity center of the world economy and politics is consistently shifting," Kommersant reported.