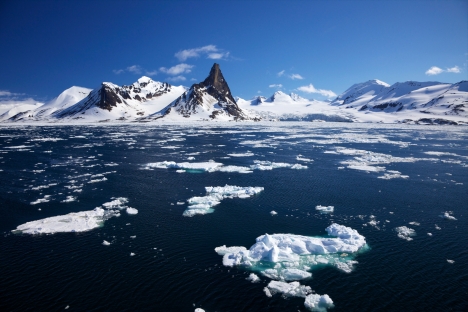 A unique Arctic expedition has brought a top-secret Russian submarine into the limelight. The AS-12 bathyscaphe Losharik has now been enlisted to help Russia gain evidence of its right to territorial waters in the Arctic.

Moscow is prepared to present evidence to the U.N. Convention on the Law of the Sea that would expand Russia’s territorial waters in the Arctic, thus asserting its right to the bed of the Arctic that is extremely rich in hydrocarbons. Russia filed a similar application once before, but the bid was turned down due to a lack of geological samples. The new evidence has been obtained by AS-12 Losharik – Russia’s top-secret deep-sea nuclear-powered bathyscaphe.

The North Pole expedition was undertaken in late September as part of the Arctic 2012 research project. The mission required working at a depth of 1.5-1.8 miles for 20 days. The deep-sea station collected earth samples using robotic arms, a dredging device (a rock filtration system), a clamp bucket (a scoop with a video camera) and a hydrostatic sampler. The results of the sample tests will be released in early 2013, when they are also expected to be handed over to the United Nations.

Losharik will very soon be getting a younger “sister.” According to Izvestia, Russia has resumed the construction of another top secret deep-sea nuclear-powered station. A source in the defense industry has told Izvestia that the vessel will actually be a smaller version of Losharik that is intended, just like her older brother, to conduct special operations on the ocean bed, including in the Arctic.

Until recently, the competing territorial claims to the Arctic made by Russia, Norway, Canada, the U.S. and Denmark have been ineffectual, since, apart from political statements, none of the countries has been able to provide any factual evidence to justify their claims. If Losharik’s recent operation does not close the matter for good, then it at least puts Russia ahead of the game. Before Losharik, no one had been able to bring up any actual samples from the seabed that could formally prove Russia right.

Meanwhile, little is actually known about the main character in the story – the nuclear-powered deep-sea bathyscaphe AS-12, nicknamed Losharik (NATO reporting name NORSUB-5).

One of the reasons behind the scarce public knowledge is the fact that the submarine was created for the Main Intelligence Directorate of the Defense Ministry and, given the specific nature of the ministry’s mission, was never intended to be declassified – just like an undercover spy. However, Moscow eventually decided to go all in and play for the sake of winning the territorial dispute.

The submarine was dubbed Losharik for its extraordinary shape: Its hull consists of spherical titanium modules. The nickname comes from the name of a Soviet cartoon character – a funny little horse with a body made up of small spheres.

According to its engineers, the unusual hull construction permits the 196-foot-long bathyscaphe to withstand the enormous pressure of ocean depths of up to 3.7 miles. Losharik is powered by a small nuclear reactor with a fundamentally new model of nuclear steam generating plant: the KTP-7I Fenix. The reactor enables the bathyscaphe to travel at a speed of up to 30 knots (37 miles) per hour and does not limit the time it can stay submerged in virtually any way. The crew consists of 25 officers.

The bathyscaphe is carried by the K-129 Orenburg submarine, which is a Project 667BDR Kalmar strategic nuclear submarine redesigned specifically for the purpose.

While assigned to Russia’s Northern Fleet, the submarine is not actually part of it, as it remains an asset of the Main Intelligence Directorate. It is stationed at Olenya Bay, where Russia’s naval spies are based.

While the AS-12 does not carry any weapons, it still poses a serious threat to the national security of many countries, since it is equipped to perform intelligence and diversion operations at depths out of reach of any other vessel in the world.

The kind of operations that the vessel could perform include using its mechanical arms not only to collect seabed samples, but also to disrupt telecommunications between continents or, conversely, plant wiretaps, which, even if detected, would be impossible to remove because of the depths.

There is also an apocalyptic theory that the work of designing the bathyscaphe was launched back when a nuclear conflict between Moscow and Washington was still on the table. The bathyscaphe is believed to have been intended to become an invincible carrier of a gigantic T-15 thermonuclear torpedo (5 feet in diameter) developed by Nobel Prize-winning physicist Andrei Sakharov.

The Soviets believed that, if detonated at a depth of 3.7 miles, the torpedo could generate an unprecedented and deadly tsunami that would wash away an entire coast of the United States, West or East.

Whatever their past plans, Moscow and Washington are now partners intent on resolving their disagreements at the negotiating table. This was the main reason why, in the mid-1990s, Russia almost stopped financing the Losharik project. The country even invited the United States to be a co-investor, suggesting that the deep-sea bathyscaphe could be involved in rescue operations.

While Losharik failed to become a rescue vessel, it has nevertheless proved a very valuable national security asset.