US ambivalence deepens on Syria 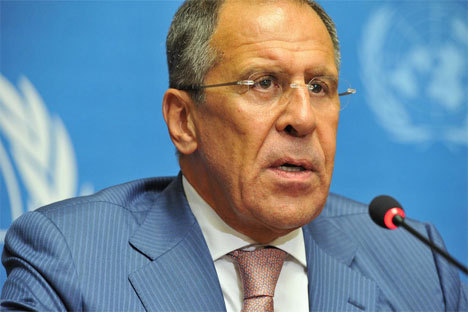 The Russian foreign minister Sergey Lavrov reacted that “the United States has decided to place all its bets on an armed victory of the National Coalition.” Source: flickr / United Nations - Geneva

The US move to recognise the Syrian Opposition Council enables Washington to arm the rebels, but the question is whether the Obama administration will cross the Rubicon.

The announcement by President Barack Obama according recognition by the United States to the Syrian Opposition Coalition is a big step forward in the push two-year old for regime change in Syria.

The Russian foreign minister Sergey Lavrov reacted that “the United States has decided to place all its bets on an armed victory of the National Coalition.” Clearly, the Obama administration timed its announcement with the meeting of the ‘Friends of Syria’ [FOS] held in Marrakech on Wednesday where more than 100 countries reportedly announced their recognition of the Syrian opposition coalition. Saudi Arabia announced a $100 million aid package for the Syrian rebels at the FOS meet.

Many observers have noted that the US move enables Washington to arm the Syrian rebels if it decides to do so. But the question is whether the Obama administration will cross the Rubicon. The indications are that Washington hasn’t made up its mind yet. Significantly, the US has branded the Nusra Front as Al-Qaeda.

Again, Washington has begun soft-pedalling on the issue of chemical weapons, with defence secretary Leon Panetta making the astonishing statement that the relevant intelligence has “really kind of levelled off.”

Finally, after all, secretary of state Hillary Clinton gave a miss on the FOS meet on Wednesday.

On the other hand, Obama’s did say that the Syrian opposition coalition now is “inclusive enough, is reflective and representative enough of the Syrian population to recognise them.” Prima facie, this stance is contrary to the Geneva communiqué, which sought an all-Syrian dialogue leading to a transitional government followed by elections. But then, it need not be the case, either.

Interestingly, the Nusra Front, which the US blacklisted, is a major participant among the Syrian fighters and is evidently backed by Qatar and Saudi Arabia. Thus, the US has essentially created an artificial organisation of Syrian exiles and is apparently now recognising it, despite being aware that it neither exercises any control over the groups of rebel fighters nor seems to enjoy much credibility within Syria itself. Whether all this contradiction is a matter of deliberate US policy or of abundant caution – or both – remains unclear. Obviously, the US has one eye on Libya. Meanwhile, the policy is still evolving.

However, there can be no pretensions anymore that it is the idealism of the Arab Spring that brought about the upheaval in Syria. The name of the game is ‘geopolitics’. The western powers are meeting with the military wing of the Syrian opposition coalition in Turkey next week. Meanwhile, hundreds of thousands of Syrians have been rendered homeless or forced into exile in turmoil. The Syrian rebels no longer hide that Qatar, Saudi Arabia and Turkey are promoting the war by financing and equipping, and providing training, sanctuaries, intelligence and logistics support. Nor do they hide that hundreds of foreign volunteers are fighting on their side.

What are Russia’s options? Russia is unlikely to join the West to call for Syrian President Bashar al-Assad’s ouster or to try to persuade the Syrian leader to resign his post. The consistent Russian position is that the West’s push for regime change in Syria is a dangerous example of meddling in the internal affairs of a sovereign country. Lavrov is on record that Russia “will not allow the Libyan experience to be reproduced in Syria.”

Moscow’s initial reaction to Obama’s announcement is sharp. But on a diplomatic plane, it would also be coolly assessing the meaning of Obama’s decision. The point is, US state department spokesperson has since clarified already that Obama’s decision is “a political step, not a legal step” and is aimed at giving “a boost to those working for a political transition in Syria” and “those planning a future that is democratic, that is pluralistic, that is unified.”

Therefore, what emerges on balance is that there is still significant convergence between the US and Russia, emanating out of common concerns as to what happens in the morrow of a regime change in Syria, and this convergence may still gain critical mass on a political track in the coming days or weeks. Herein lies the basis of some optimism. The Obama administration has just invited the head of the Syrian opposition coalition Moaz al-Khatib to visit Washington for consultations.