The Russian State Duma Committee on Constitutional Legislation and State Building has backed an amendment proposing to suspend non-governmental non-commercial organizations engaged in political activity in Russia and receiving uncompensated aid from the United States, the committee's chairman Vladimir Pligin said on Monday. 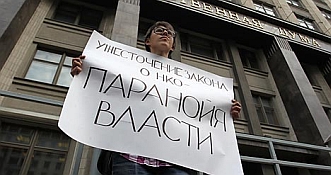 The case in point is organizations that constitute a threat to Russia's interests, as was explained during the committee's session held earlier in the day.

According to Pligin, 398 State Duma deputies and 144 members of the Federation Council joined in working on the "anti-Magnitsky bill" in response to the Magnitsky Act passed in the United States.

The document, also known as the Dima Yakovlev bill by the name of an adopted Russian toddler who died after being left unattended by his U.S. foster father in a locked car under the scorching sun for 9 hours, introduces visa and financial sanctions against U.S. citizens involved in violations of the rights of Russians. It is expected to pass its second reading on Wednesday.