Armed is not always dangerous 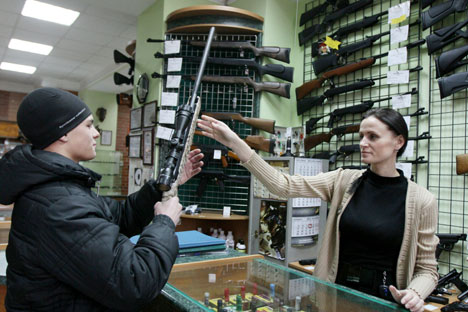 Do guns make us safer? I asked Russian firearms expert Maxim Popenker this question. Popenker is the founder of the popular bilingual website: www.world.guns.ru and has written several books on guns. However, he’s no weekend warrior. Having served as a lieutenant in the Russian Army’s air defence forces, he knows a thing or two about guns.

The former soldier is unequivocal in his stance that guns keep law-abiding people safe. “Without legal firearms suitable for self-protection, it is criminals who feel safe,” he argues.

Arming citizens is, therefore, the right policy according to him. “There are many stories of ordinary people successfully defending themselves with guns,” Popenker says, explaining why he is in favour of increased gun ownership in Russia. “The police are apparently unable to keep violent street crime in check, and people are demanding increased self-protection,” he says.

Gunning for the gun

Popenker is in favour of a bill proposed by Russian lawmaker Alexander Torshin that would to make it easier for Russians to own guns. Although the legislation has been shelved, Popenker’s arguments for relaxing gun laws are backed up by independent studies.

Data provided by the Geneva-based Graduate Institute of International Studies in its Small Arms Survey show that Luxembourg, where handguns are totally banned and ownership of any kind of gun is minimal, had a murder rate nine times higher than Germany in 2002. Germany’s gun ownership rate was 30,000 per 100,000 people.

So it would not appreciably raise violence if all law-abiding, responsible people had firearms because they are not the ones who rape, rob, or murder. By the same token, violent crime would not fall if guns were totally banned to civilians. As the respective examples of Luxembourg and Russia suggest, individuals who commit violent crimes will either find guns despite severe controls or will find other weapons to use.

As Gary Kleck, a criminologist and professor at Florida State University, concludes in his book, Targeting Guns: Firearms and their Control,in both the United States and Russia,“homicide results suggest that where guns are scarce other weapons are substituted in killings”.

In the United States, there are now 40 states where qualified citizens can obtain a handgun permit. As a result, there are now millions of Americans who are allowed to carry concealed handguns in shopping malls, on the street and in their cars. In a study published in the Journal of Legal Studies titled Crime, Deterrence, and Right to Carry Concealed Handguns, American authors John R. Lott and David B. Mustard argue this has contributed to the drop in homicide and violent crime rates.

Based on 25 years of correlated statistics from more than 3,000 American counties, Lott and Mustard argue possession of guns by law abiding citizens has deterred criminals from confrontation crime and caused murder and violent crime to fall faster in states that adopted this policy than in states that did not.

To be sure, this is controversial. The study has been panned by John J. Donohue and Steven D. Levitt, the authors of The Impact of Legalized Abortion on Crime. (Levitt, incidentally, is the author of the bestseller Freakonomics.) According to them, much of the drop in violent crime that started in 1990s can be attributed to the legalisation of abortion. They argue when abortion was legalised in the 1970s, it prevented the birth of those children who would have been disproportionately involved in violent crime had they existed in the 1990s.

Why guns get a bad name

With more than 310 million private guns for a population of 300 million people, America is the world’s leading gun-toting nation. Gun frenzy is at such a peak in the country that Strum Ruger, the fourth largest American gun company, ran out of guns and stopped accepting new orders during the December 2012 festive season.

At the same time, there are far fewer guns in private hands in the top three gun homicide nations – No.1 Brazil has 14.8 million guns, No.2 Columbia has only 2.7 million guns and No.3 Mexico 15.5 million.

Yet shootings in America grab global headlines for two reasons. One, because of an apparent morbid fascination for crime among ordinary Americans, crime news is big there. The American media then propels such stories around the world, often via live telecast of crime, the most famous being the O.J. Simpson case.

Secondly, American killers may not be more or less depraved than their counterparts elsewhere but they do have a penchant for theatrics. This was epitomised by the armour and gas mask wearing Colorado gunman who first set off smoke bombs inside a darkened movie theatre before he started shooting.

Death in a cinema theatre or in a school is truly frightening but is extremely rare. Murder itself is mostly gang-related. But the human mind is not rational. The occasional acts of mass murder leave people fearful about personal safety and the safety of their families. But come to think of it, most people go to the movies only a few times a year. And more children are killed by abusive parents or in swimming pool accidents than by guns.

Guns – not essential for slaughter

Take these two instances of genocide from history. During WWII the Germans managed to kill six million Jews without the use of guns. To those of his Nazi party colleagues who were squeamish about killing Jews the ‘normal’ way, SS second-in-command Reinhard Heydrich offered a solution. At the Wannsee Conference, held on January 12, 1942, Heydrich assured the Germans that his improved gas chambers would be able to kill 2500 people an hour, or 60,000 a day. Within a year, Heydrich assured, there would be no Jew left in Europe.

One of the earliest accounts of genocide dates back to 1200 BCE when Joshua, the leader of the Israelite tribes after the death of Moses, carried out a massacre of the Canaanites – men, women, children, babies and everything else that breathed. Over 120,000 people were killed in the space of a few hours.

The point is: the absence of guns is no deterrent to murder. So when people call for a ban on guns, are they against being shot dead per se or are they okay if stabbed to death?

Should you own a gun?

Answer this – do you need a gun or do you want one? If you live in a crime-infested city and use public transport at night, then guns can give you a sense of security, although it will probably never give you any real protection from criminals. (You might scare off a mugger once, but what happens if the next night he comes at you with his mates?)

If you want to use, say, a rifle for hunting a poor defenceless animal or fire a few rounds at a shooting range, then you probably will never be a threat to society.

However, in the unlikely event you have to use it in a life-threatening situation, your chances of survival will depend entirely on the criminal’s skill or lack of it. No real life hero could have been able to take down a determined weirdo like the Colorado shooter.

As for Russians and gun ownership, my advice is – don’t mix guns and vodka and you’ll be okay.