Frogs in the Russian-American well 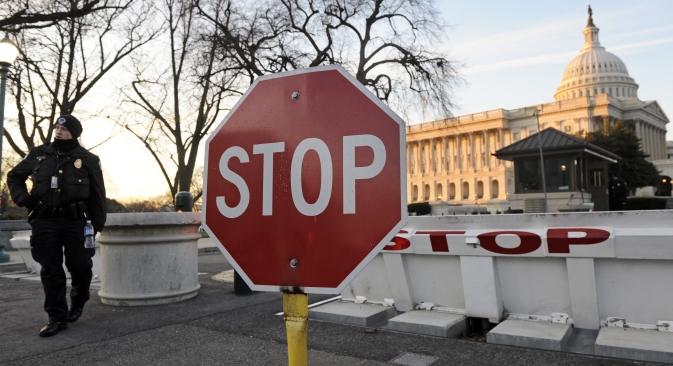 The recently adopted Magnitsky Act may serve as a barrier to further developing U.S.-Russia ties, including trade. Source: AP

Russian-American relations have a long difficult history – much of it adversarial – and nothing is ever quite simple.

What comes to mind is the title of Vladimir Lenin’s famous 1904 work “One Step Forward, Two Steps Back: The Crisis in Our Party.” But it is more appropriate to recall the anecdote of the frog attempting to climb out of the water well; it falls back by a step for every two steps it climbs. Which makes an arduous and frustrating experience. The only good thing is, it isn’t quite retrograde.

Certainly, the United States did the right thing, finally, by repealing this week the Cold War-era Jackson-Vanik Amendment, which curbed trade relations with Russia. It personifies an almost obligatory recognition by Washington of the main tendencies affecting the US-Russia relationship, namely, the end of the Cold War and the changes that have come over the world, the emergence of a stable and free market in Russia and, most important, Russia’s integration into the world economy as manifest in its ascension to the World Trade Organization [WTO].

Second, it constitutes a self-serving step by Washington to establish permanent normal trade relations [PNTR] with Russia. The Barack Obama administration admits that it is necessary to remove the US’s trade barriers so that American business will be enabled to exploit all the market benefits from Russia’s WTO membership. The business groups in the US have been lobbying that they will fall behind their competitors from China and other countries in the dynamic, fast-growing Russian market unless they have a level playing field and are able to resolve trade disputes within the WTO framework. The rough estimation is that the US could double its exports to Russia in a five-year period if only the trade restrictions are removed.

Russian accession to WTO: What are the challenges in store?

Clearly, the impetus for Washington to act is self-evident. But in the event it turned out to be a case of commendable two steps forward and a regrettable one step back. While signing the new legislation passed by the Congress into law on Friday, Obama approved a package that links normalization of trade relations with fresh sanctions against Russian officials accused of violating human rights.

The bill passed by the Congress combines the two measures to an indivisible one. The sanctions may look innocuous as a matter of the US’s ‘black list’ on Russian nationals. After all, every country maintains ‘black lists’. But then, Russian-American relations have a long difficult history – much of it adversarial – and nothing is ever quite simple. The new law called Magnitsky Act prima facie blacklists Russian officials allegedly implicated in the prison death of lawyer Sergei Magnitsky in 2009 due to several untreated health conditions while held in pre-trial jail in Moscow on fraud allegations allegedly covered up by interior ministry officials against whom he testified. The law makes it mandatory for Obama to report to the Congress on the track record of Russian officials on the human rights issues and, therefore, an irritant of dubious value has been deliberately injected into the overall relationship at a critical point. No self-respecting nation can accept such arrogation of prerogative by another country to pass judgment on its domestic affairs.

Interestingly, though, President Vladimir Putin has given a measured response. “The investigation (into Magnitsky’s death in jail) is not over yet, and it’s not yet clear who is right and who is wrong there, what the situation is. This is a purely political, unfriendly act. I don’t understand why. Why do they [US] need it? They talk of a reset but they themselves make the situation worse.”

But, Putin added that Russia’s response should be “adequate and not excessive.” No doubt, the Magnitsky Act feeds into the already-strained ties between the US and Russia. The Russians counted on Obama’s assurance to the then-president Dmitry Medvedev in an aside (which got publicised by accident), to the effect that he would have greater “flexibility” to deal with US-Russia ties if re-elected for a second term.

Obviously, the new legislation which was passed by the US Senate with a brute majority of 92-4, signals which way the wind is blowing within the US political establishment. Putin also seemed to hint at entrenched interest groups in Washington still rooted to an adversarial mentality vis-à-vis Russia. The Russian foreign ministry tweeted that the new statute is “nothing but a vindictive desire to counter Russia in world affairs.” Suffice to say, through the legislation, Congress seeks to dictate right at the commencement of Obama’s second term the terms of engagement in US-Russia relations.

Close to the bone

Russia has no lobby in Washington. Even a business lobby takes years (or decades) to develop, considering that Russia stands as a mere 20th largest trading partner of the US. No matter Obama’s innovative approach to Russia known as the ‘reset’, US-Russia relationship seems stuck in a time warp. Arguably, the reset produced some results such as the 2010 START accord, the Northern Distribution Network (which helps the US to reduce its dependence on Pakistan for supply routes to Afghanistan), the United Nations resolutions regarding Iran, the termination of Russian military sales to Iran, etc.

Here too, the 2010 START treaty has failed to act as a catalyst to greater mutual trust and understanding. The differences over the US’ missile defence system [ABM] remain as a formidable stumbling block and the NATO will not be stopped on its tracks on the ABM deployment on Russia’s peripheries. Nor is Washington inclined to concede to Moscow’s demarche that a commitment in writing be extended regarding Washington’s claim that the ABM deployments are not directed against Russia.

Meanwhile, the Arab Spring has also taken its toll. After having been let down badly over Libya, Russia faces a crisis of confidence in the West’s long-term intentions in the Middle East. Washington’s ambivalence on the surge of Islamism in the region – be it tactical or strategic – is also not helping matters. Russia has dug in on Syria and factors in the high probability of a similar western push toward Iran in a conceivable future that holds the great danger of bringing the roof down on Russia’s neighbourhood in Trans-Caucasus, the Caspian and Central Asia.

The US has of late visibly ratcheted up its propaganda against Russia. Secretary of State Hillary Clinton recently came up with the stunning thesis that Eurasia is embarking on a process of ‘Re-Sovietisation’; she voiced Washington’s intention to stop it. It doesn’t need much ingenuity to figure out that the ire is largely due to Moscow’s stubborn ‘Nyet’ to a Libya-like western military invasion of Syria.

However, what is barely hidden in all this is also that the US’s policy is ‘anti-Putin’ and ‘Russia without Putin.’ Put differently, the mantra could be, ‘anything but Putin.’ No one in Washington could be fanciful about the bedrock of popular support that Putin enjoys among the Russian people or that the mandate he received in the presidential election was in any way debatable. Equally, it is crystal clear that the anti-Putin movement which masquerades as the forces of ‘liberal democracy’ doesn’t any longer inspire even Muscovites to take to the streets.

Despite the stiff laws on unauthorized rallies, one was actually was allowed to be held in downtown Moscow last weekend at Lubyanka Square in the very shadows of the headquarters of the former KGB. With such blasé absence of fear, the protest movement in Russia is in danger of becoming a jovial carnival on a balmy weekend afternoon when the sun shines bright over Moscow.

Thus, the hidden agenda of the West in inciting a ‘colour revolution’ in Russia needs to be seen for what it is – a (vain) attempt to rattle the Kremlin and force a shift in Moscow’s policies away from the quest to play an effective role as a big power on the world stage. The mindset is embedded in the psyche of the cold warriors in the US and it refuses to go away, notwithstanding the paradox that the prevailing wind in Moscow is ‘westernism’ and Russia’s hankering to be a ‘balancer’ between the West and the East.

Putin’s remark on Magnitsky Act underscores that the Kremlin has zeroed in on the real problem. Thus, Russia has halted imports of US meat, which amounted to $450 million during the first nine months of the year alone. The Russians know from experience that the most delicious meat is when you get close to the bone.