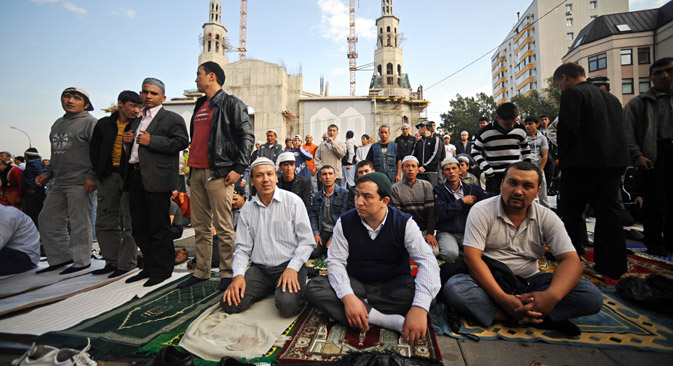 Moscow authorities may provide six sites for the construction of mosques in different parts of Moscow. While nationalists warn against building mosques without taking into account the opinion of locals, Russia's human rights activists support the authorities' move.

Moscow authorities are ready to provide six sites for the construction of mosques in different administrative districts of Moscow, Izvestia reported on Dec. 17.

"The Spiritual Directorate of Muslims of the European Part of Russia already knows three sites that will be approved, after several years of debate," the newspaper said. "They are located in Southern Butovo, Lyublino, and near the metro station Shosse Entuziastov."

Other buildings needed by the Muslim community will also be built on the provided territories, Ravil Gainutdin, chairman of the Russian Council of Muftis and chairman of the Spiritual Directorate of Muslims of the European Part of Russia, told Interfax.

"There will be a mosque in Butovo, in Lyublino (where the Moscow Islamic University is located), and in Shosse Entuziastov, where we also plan to build an Islamic culture center," Gainutdin said.

A source in the Moscow government has confirmed to Interfax that the three sites (Lyublino, Butovo and Shosse Entuziastov) have already been approved, although no final decision has been made.

"We have approved some requests, which will now be discussed with residents and the local prefectures," the source said.

A source in the Moscow mayor's office also confirmed that the other requests made by Islamic organizations are now being considered.

"There are at least 1.5 million Muslims in Moscow. If we divide this number by ten districts, we will see that there needs to be at least one mosque taking up to 1,500 people per 150,000 Muslims," Gainutdin said.

Muslims are currently not raising the question of additional mosques on the territory of "the new Moscow," the mufti added.

The idea of building more mosques in Moscow has been supported by Russia's human rights activists, while nationalists warn against building mosques without further discussions with Moscow residents.

"There are many Muslims and very few mosques in Moscow," said Russia’s human rights movement veteran and Moscow Helsinki Group chairman, Lyudmila Alekseyeva. "There is not enough room, especially on big holidays. Mosques are needed."

"I would not like a mosque to be built near my apartment building. But I don't live in Lyublino or Butovo, I live in Orekhovo," Belov said. "We need to ask local residents. We should follow the European practice of taking local opinion into account in everything. That way, everything will be quite peaceful and calm."