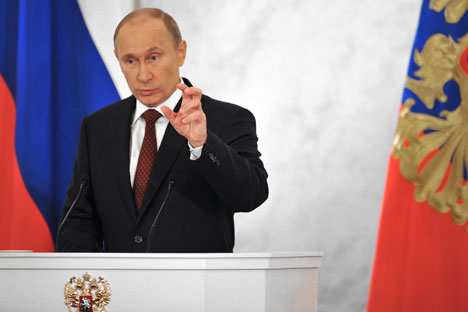 Bilaterally as well as multilaterally the visit will help shed the notion of uncertainty in India-Russia relations.

The external affairs ministry in New Delhi issued a statement on December 15 that Russian President Vladimir Putin will visit India on December 24 to attend the 13th annual bilateral summit. Now, the speculations and debates about the visit of the Russian leader may be put to rest. The visit brings to focus the seriousness on part of the two traditional partners to spearhead the strategic partnership, mooted by Putin 13 years ago as President of Russia. Any discontinuity in the summit meeting could have stalled the process and provided much needed fodder to the detractors of the strategic partnership.

Putin’s health and the media

Perhaps this visit will be confronting a lot of contentious issues in bilateral issues ranging from Sistema, Kudankulam, the Vikramaditya aircraft carrier and a variety of other issues. This will also be the visit of Putin as President of Russia after a gap of four years. While Putin has assumed the charge of the presidency this year, the Indian ruling establishment is getting worried about its reelection after about a year. So there are many shifting contours and issues that will likely colour the deliberations during the visit. But the basic minimum will remain the same – neither of the partners is going to disavow the other; the differences may persist and even fester, but the basic cordiality will remain unbroken. Interestingly, this year also witnessed celebration of 65th anniversary of the establishment of diplomatic relations.

In the last about five years, since Putin visited in 2007 to attend the annual summit, significant changes have taken place in national, regional and international scene. Starting from international scene, the US has reinvigorated its Asia strategy by emphasising on its rising presence in the region. The visit last week by US Assistant Secretary of State for South and Central Asia to Bangladesh and Bhutan, and his emphasis on establishing New Silk Road and Indo-Pacific Corridor are some of the elements of this new Asia strategy. China too has grown stronger in the mean time, with prospects of crossing the US economy before 2030. The Asia-Pacific has recently witnessed rising frictions between China and Japan, and an assertive North Korea. In the Middle East as the Syrian crisis unfolds, the international involvement will likely grow in coming days as Assad regime weakens. The Israel-Palestine conflict remains a puzzle. The rise of extremism and terrorism with their international networks, rise in sectarian strife, have become increasing concern for India and Russia. Some of these issues will find mention in the bilateral deliberations during Putin visit.

At the regional level, Afghanistan has become a matter of keen interest to countries like Russia and India. Though the drawdown of the US led International Security Assistance Forces has started, Afghanistan still remains a difficult place from a peace perspective. The Taliban remains as indomitable as it was a decade ago. It has already unveiled a plan for an Emirate of Afghanistan, where dogmatism will be the mainstay. Radicalism still remains a crucial issue. Afghanistan’s neighbourhood countries have witnessed spillover effects of instability and violence. India and Russia have reiterated their common position on a peaceful, regional driven, transformation of conflict in Afghanistan. The coming months will likely be more turbulent as the country prepares for general elections in 2014 to elect its President. India and Russia as crucial players in Eurasia will be concerned at the developments in the war torn country, and the Putin visit will reflect on this crucial issue. The two countries have constituted joint working groups on terrorism and on Afghanistan, and they will likely further strengthen bilateral mechanisms to address the issue.

Bilateral issues will figure during the deliberations at New Delhi. It will mostly be a win-win situation for both the countries. While India may expedite the process of nuclear cooperation with Russia by facilitating the process of building new nuclear plants, Russia may commit expediting the process of delivering the Vikramaditya to India. The visit will likely witness the signing of agreements in areas of arms and armaments. This month only engineers from both the countries have started working on $600 million transport aircrafts. Needless to add, arms cooperation is one of the important segments of bilateral trade. Widening the net of trade relations is already in process, and the visit may witness signing of agreements in the areas of energy, infrastructure and technology. So far, neither of the countries has revealed the details of the deliberations during the visit, but certainly one can state that the visit will boost bilateral relations.

Both the countries will reiterate their commitments to the evolution of a multi-polar world order, which transcends any particular ideology or centre of power. India and Russia will also reiterate their common resolve against the menaces of terrorism and extremism, and for peaceful transition in war torn Afghanistan. Bilaterally as well as multilaterally the visit will help shed the notion of uncertainty in India-Russia relations. Both the countries have continued this annual summit for the past twelve years, and any break in it could have been a spoiler. Putin, who initiated this partnership, will play a key role in strengthening the partnership. It will not just be a formal summit, but will have significance for bilateral and multilateral issues.