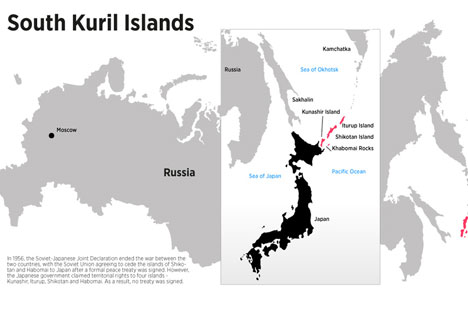 Drawing by Anton Panin. Click to enlarge the image

Given the increased activities of naval forces and other powers in the region, the strategic value of these islands has increased over the years.

The Russia-Japan territorial dispute and the controversy over the Southern Kuril Islands – Kunashir, Shikotan, Habomai and Iturup, which have been under Russia’s jurisdiction since the end of the Second World War is still continuing. The islands form a strategic boundary between the Russian Sea of Okhotsk and the Pacific Ocean. Given the increased activities of naval forces and other powers in the region, the strategic value of these islands has increased over the years.

These four islands are also said to be very rich in natural resources and contain substantial energy resources. In recent times, the dispute over the Northern Territories has come to the forefront due to Moscow’s increasing interest for developing the long-neglected economy of the Russian Far East (including the Southern Kurils), in which Russia considers Japan as its partner. In the recent past, Moscow has in fact urged Japan to follow the principle of ‘sankei bunri’ (separate politics from economics) while developing close trade and economic ties in this region, especially in the energy sector.

The popular discourse over this issue is that the dispute between Russia and Japan over the southern Kuril Islands represents one of the long standing territorial disputes in East Asia with no solution insight. Whenever the issue is discussed the major question that comes up is that, can Russia and Japan enter into a possible solution over the Southern Kurils? The argument on the issue reflects deep contradiction that exists between two sides creating difficult situation for both to agree upon a possible solution for resolving the dispute.

Certain historical facts are extremely important to know while examining the dispute. Both Russia and Japan wanted the possession of Kuril and Sakhalin Islands since they first established diplomatic relationship in 1855. In that year, the Treaty of Shimoda assigned possession of the northern Kuril Islands to Russia, while Japan received the four southernmost islands. Sakhalin itself was administered as a joint condominium until the 1875 Treaty of St. Petersburg which assigned the entire Island to Russian possession in exchange for Japan receiving the entire Kuril Islands chain up to the Kamchatka Peninsula. The Russo-Japanese border shifted again after Russia’s defeat in the 1904-5 Russo-Japanese war. The Treaty of Portsmouth that concluded the war gave the southern half of Sakhalin Island to Japan.

These islands form a strategic boundary between the Russian Sea of Okhotsk and the Pacific Ocean and given the increased activities of naval forces and other powers in the region, the strategic value of these islands increased over the years. These borders remained stable until end of the World War II. The Soviet Union occupied the entire Kuril Islands chain and southern Sakhalin Island in late August 1945. However, Soviet possession of these territories was decided during the Yalta summit in 1945.

During the 1956 Joint Declaration signed by the Soviet Union and Japan that ended the state of war between the two countries raised the possibility of the Soviet Union returning the two southernmost Kurils, Shikotan and Habomai, once a peace treaty is signed. But the irony is that till date, the peace treaty has not been signed and the controversy is still continuing. Although the joint declaration was ratified by both the parties, the dispute over what Japan calls its Northern Territories however, remained as a major stumbling block for concluding a peace treaty.

During the Cold War period, Soviet leader Mikhail Gorbachev acknowledged the Southern Kurils as disputed territory. The Japanese were hopeful of getting some positive response when the former Soviet leader showed interest in resolving certain issues of the dispute. Later on, in the year 1993, President Boris Yeltsin also mentioned that the 1956 joint declaration was still valid and his statement on this once again raised the expectation of many Japanese and increased the hope for resolving this longstanding territorial dispute. However, the statements by the former leaders failed to bring any concrete positive outcome.

President Putin in his first term re-affirms the 1956 declaration and acknowledged the dispute over four islands and sought to solve the issue with Japan through negotiation on the basis of the 1956 declaration. However, over the years this idea started fading. In the beginning of 2005, Russian officials have argued that the islands belong to Russia and that Japan has to accept Russian sovereignty over all four islands before any discussions can begin. Russia was open to a negotiated solution to the dispute while declaring that the legality of its own claim to the islands is not open to question. Russia wanted Japan to recognise Russia’s right to the islands and according to them only after that Japan should try to acquire some of the Islands through negotiations.

Nonetheless, it has also been observed that often the leaders of these two countries have also taken drastic steps over these disputed islands to worsen the situation. This was very clearly indicated by the then Russian President Dmitry Medvedev when he visited the islands and also mentioned to increase Russia’s military presence in the islands igniting the diplomatic row between Moscow and Tokyo. To show displeasure over this visit the Japan's the then Prime Minister Naoto Kan called President Medvedev’s visit an “inexcusable rudeness,” complicating the issue further.

Presently Japanese leaders are trying to establish a cooperative relationship with Russia on a broad range of issues without bringing in the Northern Territories dispute. For Japan, Russia could become necessary ally to prevent Chinese domination of East Asia. Japan negotiated to gain access to Russian gas and oil exports from fields in Siberia and Sakhalin. In 2011, Japanese leaders announced they would be willing to consider participating in joint economic activities in the Southern Kurils, provided such activities would not negatively affect Japan’s claims to the disputed territories. Japan’s leadership understands that any immediate solution to resolve the territorial dispute is low and do not want to affects other aspects of the bilateral relationship by forcing and complicating the issue.

In 2011, the tsunami and subsequent nuclear reactor meltdown at Fukushima further reduced confidence in the government among the Japanese public. The consequence of the lack of trust and government weakness in both the countries will not allow the leaders to take a significant risk on an unpopular foreign policy initiative such as compromising on claims over the Northern Territories.

Search of a solution

It is important to note that the age of imperialism has long passed and hence, there exists no shadow of war over Russia and Japan. Yet, these two global powers seem unable to build a normal relationship by concluding a mutually acceptable peace treaty that clearly is overdue. However, the two sides need to be creative for bringing mutually acceptable solution to end the territorial dispute. It is important to continue their efforts to move ahead with negotiations.

Presently, the Russo-Japanese trade and investment is very low even though the potential for the same is very high. There are many opportunities for both the parties to increase the bilateral trade and economic relationship. However, states are extremely cautious while investing on each other’s territories. Of late, both Russia and Japan’s increased involvement in the Asia-Pacific region has become furthermore important to build a relationship of trust with each other and keep the territorial dispute aside. Various aspects of this dispute are extremely complex and have continued to evolve every now and then especially after the break-up of the Soviet Union.

The issue of sovereignty is also very significant which is making the controversy even more complicated. There are many historical and legal facts involving this conflict and clash of interests. However, cordial relationship between Russia and Japan is of interest to all the other countries in the region. It would be in the interests for all, if these two countries could smoothly resolve the issue of the islands for maintaining peace and security in the region.

Though it is not sure how and when the solution can be achieved at the same time, it is important to note that the efforts should be continued and the main aim should be to find possible mutually acceptable solutions. There are number of regional and global issues of common concern to Russia and Japan that calls for bilateral cooperation like energy, environment, regional security, non-proliferation, terrorism, international migration and regional economic integration. The need is paramount for both Russia and Japan to leave the past behind and forge a future-oriented relationship.