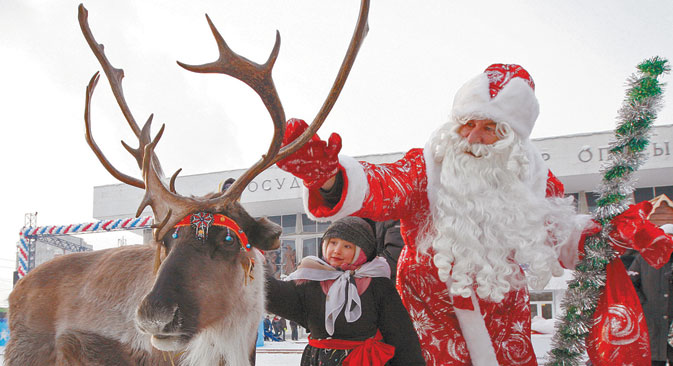 New year in Russia is all about tradition, food, more food, family, exchanging gifts, glamour, snow and toasts to the future.

Every year, grandmothers take over Russian kitchens and show everyone how a new year feast should be laid on the table. Traditional dishes include “herring under a fur coat” – herrings covered with layers of egg and vegetables; the Olivier salad, which has 11 ingredients; and kholodets, a jellied meat dish with peasant origins that is now a delicacy with an international reputation. The table is a mix of old and new, pickled and steamed.

Drink plays a key role in the celebrations. Alongside traditional vodka, Abrau-Durso sparkling wine is widely consumed. It was once a favourite of the tsars and was later known as “Soviet champagne”.  The company is now owned by the Russian businessman Boris Titov.

The two drinks are poured for the all-important toasts as friends and families gather. A toast is traditionally made five minutes before the Kuranty (the large clock on the Kremlin’s Spasskaya Tower starts the countdown to midnight. It is followed by the president’s speech, when the whole country stops to listen, in much the same way as Britons traditionally listen to the Queen’s television message on Christmas Day.

The atmosphere is magical. Once the 12th chime of the Kuranty has sounded, partying begins and gifts are exchanged. Glasses clink, gifts are unwrapped and there’s dancing in the snow as fireworks light up the sky.  Getting ready for the celebrations is as important as the festivities themselves. As Chekhov said of the new year: “Everything should be beautiful in the person: face, clothes, soul and thoughts.”

To help you celebrate, here are some suggestions for recreating a Russian New Year in London.

Kholodets
Different types of meat are used in regional variations. The strong broth is cooked by boiling only those parts of the carcass with jellying ingredients – usually pork legs, ears and beef tails. No gelatin or artificial additives are used.

New year is about letting the old year go – literally washing it off. That’s why the Russian banya (steam bath) is a key part of preparations on New Year’s Eve: you start the celebrations with an invigorated body and a clean soul.

Like a sauna, the banya is filled with steam, but it has a twist: veniks (birch branches) are used to beat the body, and soaked leaves provide a  soothing scent to inhale. The heat is interchanged with cold as you put ice on your hot skin or dip into an ice-cold plunge pool. The banya experience is a sociable activity that can be enjoyed with friends, often accompanied by a few drinks.

You can now experience an authentic banya in east London at Banya No.1, which is holding a New Year’s Eve party dedicated to the cult Soviet film Ironia Sudby (The Irony of Fate). The film is part of the traditional New Year celebrations, as millions watch the main character stumble through a series of misunderstandings following a night at the banya.

The film begins with the following words that have entered the national consciousness: “Every year on December 31, my friends and I go to the banya”.

It’s traditional to dress stylishly, so no Christmas jumpers can be worn on New Year’s Eve – glitz and glamour or formal attire is the dress code.

Olivier salad
Russian salad, as it is often called, was invented in the 1860s at the Hermitage restaurant by 19th-century Belgian chef Lucien Olivier. It’s a combination of prawns, diced potatoes, vegetables, eggs, ham and mayonnaise.

For an extra Russian touch, check out the beautiful jewels Fabergé has created for this new year. Les Saisons Russes range offers a series of sumptuous jewels that journey through the Russian seasons. Crafted in the shape of fur-clad Russian figurines and ice-skaters, they are embellished with diamonds, precious stones and pearls.

Founded in 1842 – and the  the jeweller of choice for royalty, nobility and tycoons ever since – Fabergé became official jeweller and goldsmith to not only the Russian Imperial Court, but also to the British Royal Family – who amassed one of the world’s finest collections of Fabergé over six generations.

Fabergé gifts were traditionally given at special occasions by European royal families; when gifts are exchanged at midnight, what could be better than unwrapping a Fabergé jewel?

Beautifully dressed, bejewelled and invigorated, let the New Year celebrations begin… Those who don’t have to prepare food can head down to Mari Vanna (info@marivanna.co.uk) restaurant, the Knightsbridge home from home for those who appreciate great Russian food and an authentic atmosphere.

Mari Vanna is offering an unforgettable feast this New Year. Staff will greet you with caviar and champagne on your arrival, and a decadent Russian banquet will follow.

Vinegret
Vinegret is a vegetable salad made with diced boiled potatoes, beets and other vegetables, which may include pickles, cabbage, kidney beans, peas or carrots. It is traditionally served with Russian black bread and meat or fish.

Britain may have its cold spells, but nothing to compare with the freezing temperatures in Russia at this time of year. For those seeking a meal or drinks in a seasonal atmosphere, the Ice Bar at Heddon Street, off Regent Street (info@belowzerolondon.com), is the perfect venue, where the walls, bar, tables and even your own personal glass are made of the purest ice. This new year, the evening includes a seven-course dining extravaganza with champagne and hot drinks to follow. As the clocks strike 12, there is surely no better place to find people who are eager to dance and hug.

If you want to indulge in a traditional Russian pastime, you can always book an ice-skating session – the rink at Somerset House is just one of many in the capital – and glide (or stumble) into the new year on ice.

The New Year celebrations are a magical time for children. This is when they dance around the tree holding hands, wear masks, sing songs and call on Ded Moroz (Grandfather Frost) and his granddaughter Snegurochka (the Snow Maiden), the two traditional Russian characters who make New Year happen – Ded Moroz brings the presents and lights the star on top of the tree.

Children in London can share this magical experience by coming to one of the events organised by the Russian club Ladushki or the Arbuzz Project. Children can rehearse songs and embark on an interactive adventure along with well-known characters from Russian winter fairy tales. These include the evil Baba Yaga, who steals presents from Ded Moroz; the cunning fox, who tries to trick the children; and the good helpers – the rabbits, hedgehogs and the snowman – who lead the children to the inevitable glorious greeting with Ded Moroz and Snegurochka.

Herring under a fur coat
This salad is slightly cake-like, with its layers of pickled herrings, vegetables and eggs, and a topping of mayonnaise. Grated beetroot lends it a rich purple colour. It’s  probably the most popular of all Russian salads.

As the song from TV cartoon Prostokvashino (a Russian favourite with all generations) has it: “Should there never have been winter, we would have faded away under the heat of the sun and everlasting summer, missing out on the dear magic of the New Year chaos”.

No one can evoke the winter magic as realistically as Slava Polunin, the famous Russian clown who channels the subject of winter and its components into his stellar interactive Snowshow, which is showing at the Royal Festival Hall this New Year. This spectacular show, which is suitable for both adults and children, is guaranteed to leave even the most world-weary adult spellbound.

The show of Polunin is back to the Southbank Centre's Royal Festival Hall from December 17, 2012 until January 7, 2013. For more information, you can email accesslist@southbankcentre.co.uk or to book Assisted Performance tickets, call the Ticket Office on 0844 875 0073.