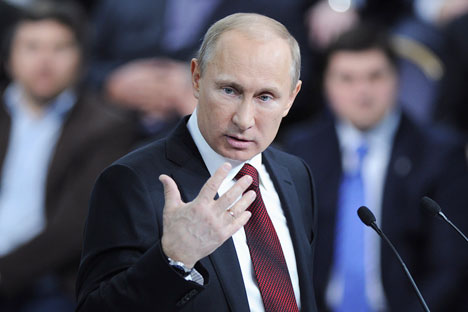 An annual summit mechanism between India and Russia has been put in place as the primary vehicle to provide guidelines for augmenting cooperation between the two countries.

Two inter-governmental commissions – one on trade, economic, scientific technical and cultural cooperation headed by important cabinet ministers from both sides, and the other one on military-technical cooperation headed by the defence ministers of both countries provide inputs for the successful conclusion of the summit. These two commissions usually conduct their regular sessions on the eve of the summit in order to device new means that could bolster bilateral cooperation.

As Russian President Vladimir Putin’s official visit to India draws closer, commentators and experts seem to have lost track of number of summits conducted between Delhi and Moscow. While most experts stress that the forthcoming Delhi summit would be the 13th bilateral summit between the two strategic partners, others point at different numbers.

It is no surprise why experts suggest that this would be thirteenth summit. Yes, if you begin your countdown from the first historic Indo-Russian summit held in October 2000 during President Vladimir Putin’s first of ever state visit to India, then it would be the thirteenth summit between two countries.  This was a landmark summit that formalised and laid the foundation for our burgeoning strategic partnership that has stood the test of times over the years.

Though the idea of strategic partnership between two countries germinated in the   middle of 1990s, particularly after Russian foreign minister Andrei Kozyrev’s exit from Smolenskaya Ploschad, this was largely a hollow slogan or at best a futuristic concept, without any content in it. Veteran Russian diplomat and scholar Evgeny Primakov’s appointment as Russia’s new foreign minister in early 1996 following ruling party “Choice of Russia’s” devastating election debacle a few months earlier, triggered a serious discourse on building a strategic partnership between India and Russia.

It was during the Indo-Russia summit held in 1997 when the words “strategic partnership” found mention for the first time in a statement made by Yeltsin’s then national security adviser Andrei Kokoshin.

It is only Vladimir Putin who formalised and provided solid content to our strategic partnership during his presidency.

However, the decision for conducting an annual summit between India and Russia was taken much earlier. An understanding for introducing the annual summit mechanism in the bilateral interaction was reached during Indian Prime minister Narasimha Rao’s meeting with Russian President Boris Yeltsin in February 1992 in the sidelines of UN General Assembly at New York.

Indo-Russian relations had nosedived in all possible spheres following the Soviet disintegration, and the two countries had to sit down to decide steps for removing irritants from the bilateral relationship and device mechanism for providing new lease of life to bilateral cooperation. According to the understanding reached in New York, it was planned to organise President Yeltsin’s visit to India in 1992 itself.

However, the first Indo-Russian summit was held in January 1993 in Delhi between Indian Prime Minister Narasimha Rao and President Yeltsin that helped in resolving most of the vexed issues concerning the bilateral relations and paved the path for moving forward bilateral cooperation. The second summit between the two leaders that took place in Moscow in June 1994 produced the historic treaty on the protection of interests of pluralistic states, a novel document in the post-Cold War era for defending national interests of multi-ethnic and multi-conventional states.

There was no summit-level meeting in 1995 as Yeltsin failed to visit India in that year. The next summit was held in Moscow in 1997 with the participation of Indian Prime Minister Deve Gowda.  However, President Yeltsin again failed to undertake a visit to India for participating in a bilateral summit.  Yeltsin’s ill health coupled with domestic turmoil did not permit him to visit India for participating in the planned 1998 summit. Thus, President Yeltsin could visit Delhi only once to participate in the first ever Indo-Russian summit in the post-Soviet period.

President Putin, who heralded the strategic partnership between the two countries, would be remembered for undertaking the maximum number of official visits to India. The forthcoming Indo-Russian summit scheduled to take place on December 24 would indeed be the 13th one since Vladimir Putin became Russia’s president and signed the Delhi Declaration on strategic partnership during his first ever state visit to India in the year 2000.

Vladimir Putin enjoys the distinction of being the first and the only Russian leader to be the chief guest in India’s Republic Day celebrations, an honour bestowed on India’s close strategic partners. Because of his significant contribution to strengthening Indo-Russian strategic partnership, which now has been elevated to the level of special and privileged strategic partnership, the first decade of the current century in our relationship is aptly called as Putin’s decade.

While Yeltsin visited India only once during his almost decade long presidency, the forthcoming summit would be Putin’s 6th official visit to Delhi and 9th summit with Indian leaders. This clearly demonstrates his priority of Russian policy towards India, belying doomsday prophets suggesting that India has fallen from the priority list of Putin’s foreign policy agenda.