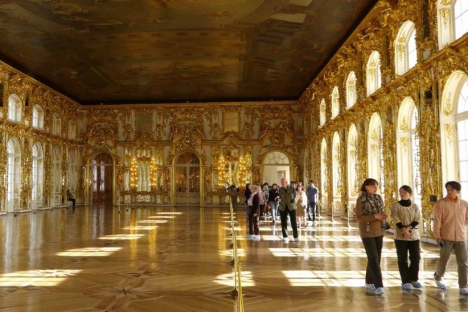 Mathew G. Crisci,an internationally-recognized business executive, keeps reflecting on his recent trip to Russia. This time he shares his impressions about his trip to St Petersburg's famous palace.

Day seven was the “mucho touristy” trip to Catherine the Great's summer palace in Pushkin, about 18 miles south (45 minutes by car) from our hotel. I say touristy because the Palace is de rigueur on every tour. Although I must admit, upon arrival at the Palace, you cannot help but be struck by its sheer size and opulence. It is the personification of the “Wow” factor.

Since this was my second trip to the Palace, my agenda was different than most. I was interested in how far the human spirit had restored a most important and visible Russian asset, the building‟s grand entrance hall called the Gold Room. I believe this room holds special meaning to many Russians, eventhough most have never visited the site. In 2009 I was permitted to visit the underground passageway which painstakingly chronicled how the Germans raped and pillaged this magnificent room.

In the ensuing years, it is estimated that some 20,000 Russian craftspeople have worked on the restoration. During our last visit the room was about 80% restored. The fourth wall, was completely covered in white canvas. Our guide commented, “Although it will probably be many years, our nation is looking forward to the day when all will be as it was.” I remember making some sarcastic, wise ass comment at the time, “we‟ll be dead and buried by the time they finish this thing!”

Well I am happy to report this “wise ass” had to eat crow! The entire room had been lovingly restored to its former glory. It was beathtaking. It also made me cry. I had learned a little more about the indeflatable Russian spirit.

As for the remained of the Palace tour, I can‟t say I learned anything new. The rooms and the grounds remained spectacular, something, somewhere was always under renovation, and our guide for the day, sweet Tanya, was happy that we were happy. As for my Brit friends, we had a group shot, although Charles wife Annette, seemed to be distracted, and David took my picture by the throne, which I was convinced fit me like a glove....Ahhh, perhaps in my next life.

Before returning to the City, we stopped at the lunch room for a bite to eat. There were numerous goodies, including the ubiquitous meat turnover, which reminded me of an important lesson I learned the last time...don‟t ask what kind of meat is in a meat turnover. To most Russians meat is meat. It‟s not important whether it is beef, lamb, pork or veal. My hypothesis: the attitude is a holdover from the days of Communism when you were happy any meat was available.

As we sat, I asked Tanya where the peasant or communal museums showed how the majority actually lived. She responded quizzically, “I do not know of any, but why would you want to see that?”

Once in our van, Tanya said, “After all the walking, it is fine if you wish to rest.” I think there was a sense among all of us that this might be our last trip to Russia, so we were determined to absorb all we could.

As we drove back to the hotel, every block felt like a new experience, some terribly familiar: 24 hour stores, outdoor posters, and busy shopping streets; and, some distinctly Russian: most notably the preparation and signage for the May 9th Victory Day celebration. We drove Tanya and our driver crazy by asking to stop her and there for another picture. They were quite accommodating, although I think they thought we were absolutely mad!

The Victory monuments and signs spoke clearly. It remains the job of every Russian generation to keep the flame of the horrendous tragedy that killed 30 million plus citizens burning brightly for future generations. Their goal: to make sure that history does not repeat itself. And, so it is, as my trip comes to its conclusion, I wonder, why must two fundamentally like-minded allies such as America and Russian remain so suspicious of each other? Why must leaders on both sides carry such baggage? And, who might trust enough to take the first step to a new world order?