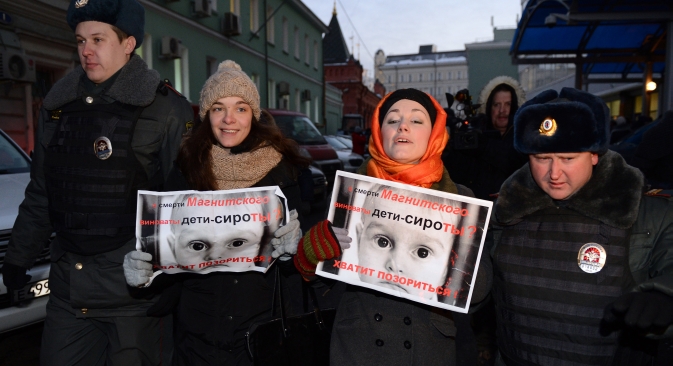 Up to 30 people have been taken into custody during the protests against the anti-Magnitsky Act bill, proposed by Russia's State Duma. Source: RIA Novosti / Maxim Blinov

About 30 people have been detained as result of the recent rally against Russian State Duma's new bill retaliating against the Magnitsky Act.

Opposition activists has held unsanctioned pickets near the State Duma building on Wednesday morning to express their indignation about the Russian bill retaliating against the Magnitsky Act just before the second reading of the Dima Yakovlev Bill is scheduled for that day, says a report published on the opposition's social network pages.

"Let them look into the eyes of those who feel ashamed of them before they endorse their outrageous law," the opposition announced earlier in its social network page.

Several people has been detained during an unsanctioned protests near the State Duma. The detainees introduced themselves as journalists but failed to produce documents confirming their status, the Interior Ministry told Interfax.

"While an unsanctioned action in the city center was being prevented, some of those detained claimed that they were members of the press but refused to produce their press cards," a police spokesperson said.

The detainees said later for the record that they were at the place of an unsanctioned demonstration as its participants rather than as journalists, he said.

One of the picketers told Interfax they were not going to stop their action even despite the rather cold weather. Meanwhile, three police buses have arrived at the scene with several policemen wearing bulletproof vests and armed with rubber batons.

Police detained two activists near the State Duma building. A young man and a young woman holding folded banners were standing in front of a group of Dima Yakovlev bill opponents when several policemen detained them and escorted them to a police bus.

Initially, human rights groups said earlier that 13 people, including a citizen of Germany, had been detained near the State Duma building on Wednesday morning for protesting against the anti-Magnitsky act bill, which envisions, in particular, U.S. citizens being banned from adopting Russian children.

Yet afterward the number of detainees has increased up to 30 people.

Almost all of the State Duma deputies, with only two votes against and one abstention, supported the proposal that a bill retaliating against the U.S. Sergei Magnitsky Rule of Law Accountability Act of 2012 be considered in the second reading at a plenary session on Wednesday.

The State Duma constitutional legislation committee drafted several amendments to the bill before the second reading, including those banning the adoption of Russian children by U.S. citizens and outlawing bodies and organizations brokering intercountry adoptions between the U.S. and Russia.

A Russian bill intended to retaliate against the U.S. Sergei Magnitsky Rule of Law Accountability Act of 2012 that the State Duma published in its database before passing it in the second reading contains all harsh proposals recommended by the constitutional legislation committee, including that on repealing a Russian-U.S. intercountry adoption agreement, so effectively banning the adoption of Russian children by U.S citizens.

The State Duma website published a list of amendments to the bill, 14 of which the committee recommended adopting and 11 rejecting.

The bill the Duma is considering in response to the Magnitsky Act would impose similar visa and financial sanctions on U.S. citizens abusing the rights of Russian citizens. The bill was initiated by State Duma Chairman Sergei Naryshkin and the heads of the four parliamentary factions.