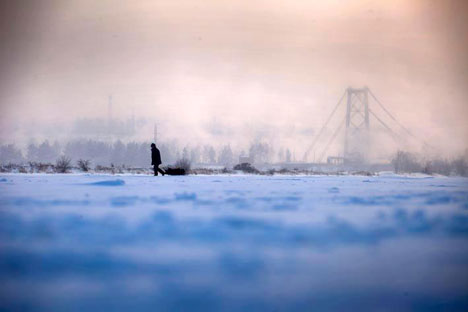 Down to -50 Celsius. Source: Ricardo Marquina

Russians freeze to death as strongest winter in decades brings cold winds and snowstorms across the country.

Russia is enduring its harshest winter in over 70 years, with temperatures plunging as low as -50 degrees Celsius. Dozens of people have already died, and almost 150 have been hospitalized. The country has not witnessed such a long cold spell since 1938, meteorologists said, with temperatures 10 to 15 degrees lower than the seasonal norm all over Russia.

Across the country, 45 people have died due to the cold, and 266 have been taken to hospitals. In total, 542 people were injured due to the freezing temperatures, RIA Novosti reported.

The Moscow region saw temperatures of -17 to -18 degrees Celsius on Wednesday, and the record cold temperatures are expected to linger for at least three more days. Thermometers in Siberia touched -50 degrees Celsius, which is also abnormal for December.

The Emergency Ministry has issued warnings in 15 regions, which have been put on high alert over possible disruptions of communication and power.

Across the country, heat pipelines have broken down due to the cold. In southeastern Russia’s Samara, the cold has broken down many heat pipelines, leaving hundreds of homes without heating, including an orphanage and a rest house. Many schools and kindergartens have been closed for almost a week.

The cold spell, along with snowfalls, has disrupted flights all over the country, and led to huge traffic jams. In the southern city of Rostov-on-Don some highways were closed due to snowfalls over the past two days, triggering a traffic collapse.

More cold in the capital

Over the weekend, meteorologists predict temperatures will plunge even lower in the Moscow region, hitting -25. The Russian capital is also expected to be swept with snow, RIA Novosti reported.

Temperatures have been 7 degrees lower than the norm for five days already, which is considered an anomaly, according to the Meteonovosti.ru website. The cold spell in the Moscow region is expected to continue for at least three more days.

Due to the high humidity, these freezing temperatures will feel even colder than they actually are, meteorologists explained.