Konstantin Garibov
The Voice of Russia 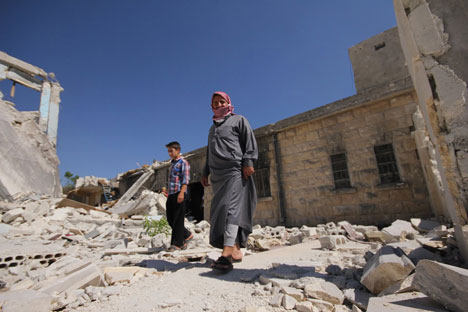 Moscow has developed a plan to evacuate 30,000 Russian citizens from the civil war-ravaged country.

Russian citizens in Syria are employees of Russian institutions overseas, experts working on private and state contracts, people who are in Syria on private trips and also those who are married to Syrians.

The evacuation plan was jointly developed by the Russian ministries of emergency, defence and foreign affairs. This just means that Moscow fears the aggravation of the situation in Syria, First Vice-President of the Academy of Geopolitical Problems Konstantin Sivkov told The Voice of Russia. He believes that it is necessary and timely to take preventive steps to guarantee the security and preserve the personal property of Russian citizens.

“If we know that the number of people is 30,000 we can calculate the required number of buses, ships and planes,” Sikov said. “To evacuate 30,000 people we need 500-600 bus trips and about 100 flights. We need 5-6 ships that could accommodate about 1,000 people. Russia is capable of allocating this number of ships and planes. The operation will certainly not be carried out overnight, in all probability it will take a week or two, which is enough to evacuate all Russians from Syria.”

“Emergency Ministry aircraft are prepared for landing on Syrian airfields, as well as in Beirut in Lebanon. The distance between Beirut and Damascus is 90 kilometres. With our experience in evacuating people in extreme situations we are sure to perform the tasks entrusted to the Emergency Ministry in this difficult and rather dangerous situation.”

The evacuation plan also envisages a combined evacuation itinerary. In particular, Russians are to be transported by buses to the Syrian ports of Tartus and Latakia. There is a Russian ship repair and refuelling station in Tartus from where people could be sent by sea to the port of Larnaka in Cyprus. In this connection, observers pointed out that on Monday the Russian Baltic Fleet sent a detachment of combat ships and auxiliary vessels to the Syrian coast. We do not rule out the participation of this detachment in the evacuation of Russian citizens.