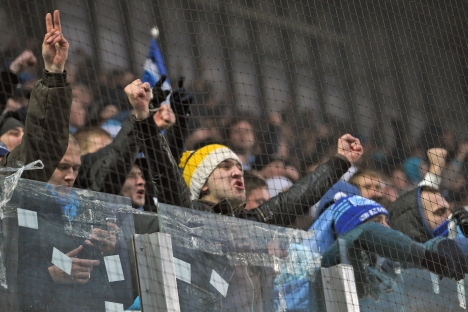 The fans of the Zenit soccer club have drafted a document that calls for refraining from buying gay or black players. Source: Kommersant

Racist statements made by fans of the St. Petersburg soccer team Zenit could seriously affect Russia's image, as the country prepares to host the 2018 World Cup.

Supporters of Zenit have drafted a document in which they state their views on who should be on the team roster. In their opinion, the club should refrain from buying gay or black players. Experts warn of the danger of escalating tension inside Russian soccer and the country's worsening image as the host of the 2018 World Cup.

The 2012 soccer season in Russia was not short of a scandal or two, and, more often than not, Zenit found itself at the center of attention.

After an astronomical amount of money was forked out for the services of newcomers Hulk and Witsel, club captain Igor Denisov openly sparred with the team management, demanding a salary increase. He was eventually moved to the reserve team and missed several key games as a result. No less dramatic were the firecrackers thrown by Zenit fans at Moscow Dynamo's goalkeeper, Anton Shunin.

As the year drew to a close, fans of the St. Petersburg club again shook the soccer world by publishing a manifesto entitled “Selection-12.”

The document, which was published online, outlined the fans’ views on the formation of the team. Among other things, the fans declared their disapproval of bringing in black players and representatives of sexual minorities. Fans also categorically rejected the idea of the team picking up “mercenary rogues who roam from club to club.”

In their eyes, team players should ideally “possess fighting qualities and come from St. Petersburg or the surrounding area – or, at the very least, Slavic or Scandinavian countries.”

“We discussed the document on our forum for a long time. More than 90 percent of those involved in the discussion voted for it,” representatives of the Zenit fan movement were quoted as saying by the newspaper Metro.

“The manifesto is not an ultimatum. It represents the concerted view of people who have supported the team for many years.” Moreover, the fans do not believe their opinion to be racist: “For us, an all-white Zenit is an important tradition, nothing more. That way our club retains its identity,” reads Selection-12.

"The Zenit fans were right to draw up the document. When Barcelona fields 11 players brought up locally, they are applauded," Maxim Karotin, an expert in fan movements, told Gazeta.ru.

The demarche met with a calm response from officials of the club: a statement released by the club's press service was full of politically correct phrases. In particular, the statement said that “players are selected not on the basis of ethnicity or race, but only [according to] their sporting qualities and achievements.”

Russian soccer legend and first vice president of the Russian Football Union, Nikita Simonyan, criticized the fans' action: “It is very strange to hear such things when the whole world is trying to unite. People of different creed and color live side by side,” Simonyan told Izvestia. “I believe that the fans have adopted the wrong position in this matter. It could strike a serious blow to the image of the club and Russia.”

Sergei Vedeneev, a veteran of the Zenit team that won the Soviet championship in 1984, remarked that the fans' statement concealed the interests of someone behind the scenes.

“In St. Petersburg, people of different nationalities live and study together and play at youth soccer schools. No normal person would ever make such statements. But if it really is so, then it must have been on someone's orders. Young people are very impressionable. We need to understand who benefits from the rising anger and aggression in St. Petersburg and the country as a whole,” said Vedeneev.

Meanwhile, the chairman of the All-Russian Supporters' Society, Alexander Shprygin, said that he had sought legal advice regarding the manifesto. “They're all ready to make racists out of the fans,” Shprygin told Gazeta.ru. “I myself, however, have carefully examined the document and found it to contain nothing criminal. Every fan club has the right to its own position.”