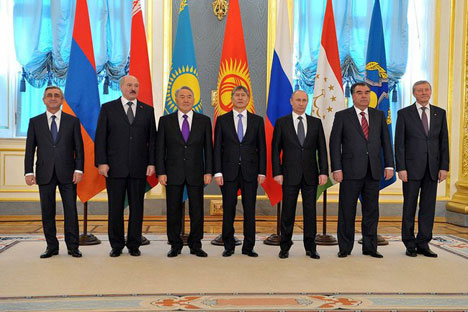 Tashkent is having a ball and is carving out a lot of space for itself to manoeuvre as a regional power.

The summit meeting of the Collective Security Treaty Organization [CSTO] in Moscow on Wednesday formally accepted the decision by Uzbekistan to “suspend” its membership. Tashkent has effectively decided to quit the Moscow-led alliance – for the time being, at least.

On the eve of the CSTO summit, Russian Foreign Minister Sergey Lavrov paid an unscheduled two-day visit to Tashkent on Monday. While receiving Lavrov, Uzbek President Islam Karimov suggested that Tashkent seeks to look for ways to strengthen strategic ties with Russia, its exit from the CSTO notwithstanding. “Consolidation of bilateral relations is one of our priorities”, he said, and “security matters are on our bilateral agenda.”

Lavrov regretted the Uzbek decision and noted it as Tashkent’s “sovereign choice.” Interestingly, he was inclined to look ahead, visualising the possibility to “synchronize and harmonize everything that is being done within the CSTO” and transfer them to the bilateral plane between Moscow and Tashkent and flagging that their partnership platform provides scope for military cooperation.

Indeed, the parting of ways has been smooth – no disputation, no rancour, no melancholia. This is partly because the protagonists parted have once before experienced the pangs of separation and found them to be ephemeral. Nonetheless, perhaps, a trace of exasperation appeared in the words of the Belarus President Alexander Lukashenko who cautioned that “there will be no easy terms” if Uzbekistan were to seek readmission again at a later date, as it once did in 2006. He seemed to suggest that the CSTO caravan will roll on regardless, and that Uzbekistan cannot hope to cherry pick from the alliance members’ welter of commitments and obligations regarding collective security. ‘Take it, or leave it’ – that’s the mantra.

Indeed, Tashkent’s decision has a complex background. While analyzing the Uzbek demarche to the CSTO (which was originally made in June), Russia’s Kommersant newspaper attributed as main reasons Tashkent’s desire to pursue an independent policy on Afghanistan and, secondly, to step back from the matrix of close defence ties that the alliance has been contemplating seriously of late.

Either way, Uzbekistan’s exit from the CSTO impacts regional security at the present sensitive juncture when western troops are preparing to withdraw from Afghanistan. At any rate, Tashkent’s recent legislation banning all foreign military bases on Uzbek soil and affirming its determination to steer clear of all military alliance systems would testify to the country’s robustly independent foreign policy. Equally, the single-minded propensity to view any paradigm in regional or international politics through the prism of self-interests is a consistent feature of Uzbek diplomacy. Added to these would be the country’s high sense of destiny as a regional power and a pivotal state in Central Asia with a burning ambition to keep all options on the table to realize its objectives in its ‘near abroad’.

Thus, the Uzbek decision to quit the CSTO contains more than one vector. In the given regional situation, Tashkent’s decision is neither a ‘pro-American’ nor an ‘anti-Russian’ move.  Of course, Tashkent will seek to maximize its gains out of this decision in its future dealings with both the United States and Russia. There is talk already that the US is inclined to gift to Uzbekistan some of its surplus military hardware in Afghanistan as quid pro quo for Tashkent’s cooperation in the post-2014 period. Again, US military has been engaging Uzbek contractors for rendering various services, and such deals are invariably lucrative. In sum, from the Uzbek viewpoint, a western gravy train is running through Central Asia and the Hindu Kush.

Besides, the gains are also geopolitical. The West by virtue of its long-term military presence in Afghanistan has become in effect a provider of security for the Uzbek-Afghan border. Again, Uzbekistan’s dealings with the US have matured. Washington has learnt the hard way from the Andizhan experience in 2005 that it is prudent not to bully Tashkent. The US and European Union have been compelled to remove their sanctions against Uzbekistan.

On the other hand, Uzbekistan’s ties with China are on a steady upward curve, while the relations with Moscow always retained their warmth and cordiality and their special flavour at the level of the elites. In sum, Tashkent is having a ball – to use an American idiom – and is carving out a lot of space for itself to manoeuvre as a regional power.

At the end of the day, no matter Lukashenko’s warning, Tashkent will remain confident that like a prodigal son, it can always return home to take shelter under the CSTO roof if the push comes to the shove on the security front. Conceivably, Moscow is reciprocating by transferring the core impulses of the CSTO’s security cooperation over to the Russian-Uzbek bilateral format. It is a bit like the 1983 James Bond film – ‘Never Say Never Again’.

However, the big question remains: What about the CSTO’s future? In Central Asia at least, any regional grouping that doesn’t include Uzbekistan is something like William Shakespeare’s Hamlet without the Prince of Denmark. Uzbekistan is a key country in Central Asia.

Nonetheless, Uzbekistan was also putting strains on the alliance’s cohesion, its dynamics and its evolution as an effective security alliance. Tashkent compelled the CSTO to perform sub-optimally. The CSTO’s inability to intervene in the ethnic riots in Kyrgyzstan in 2010, which was the gravest security crisis in that country since its independence, was almost entirely attributable to Tashkent’s intransigence. Suffice to say, the principal obstacle to the evolution of the CSTO’s rapid deployment force has now been removed. That, paradoxically, puts the onus on Russia to steer the CSTO to greater credibility.

The post-2014 security scenario in Central Asia is far from clear. But one thing that emerges is that the US and NATO are planning to keep their military presence in the region for the long-term. The CSTO will come across the NATO’s insistent outreaches into its alliance territory. To be sure, the western alliance’s stubborn refusal to cooperate with the CSTO contains a barely-disguised message. This is where Uzbekistan’s membership of the CSTO made a difference.