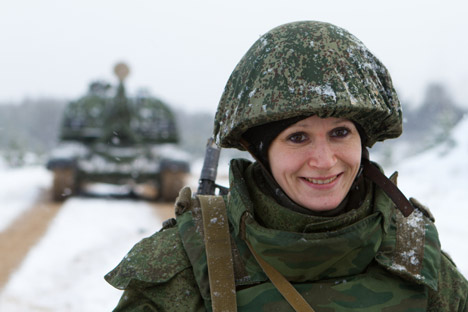 To solve the problem of Russia's understaffed army, the State Duma is drafting a bill on the voluntary recruitment of 18-year-old Russian women for one year.

Tatiana Moskalkova, Duma deputy for A Just Russia and major general under the Ministry of Internal Affairs, told Izvestia that a group of deputies are preparing a bill under which women are to be drafted into the army. The cue was taken from the Israel Defense Forces (IDF), in which a third of military personnel are female.

Moskalkova's idea is that women will be invited to the military registration and enlistment office when they turn 18, just as male conscripts are. "On receiving an army summons, she will be able to decide for herself whether or not to serve," said Moskalkova. "Female recruits would help set up medical or psychological services, which would make military service more humane."

Women already have the right to serve in the armed forces, either as civilians or as contracted officers, sergeants, or soldiers. As of 2012, the Russian Armed Forces counted almost 50,000 women in their ranks (including 11,000 warrant officers) and approximately the same number in civilian positions.

United Russia, which controls 53 percent of the lower house of parliament, reacted with skepticism to the initiative. "We already have departments where women can receive military training to serve as doctors, translators, and in other specialist areas," said Deputy Speaker Sergei Zheleznyak.

The second largest faction in the Duma, the Communist Party, did not support Moskalkova's proposal. "In peacetime, we oppose drafting the fairer sex, because it is a step toward mandatory conscription, as is the case in Israel and Cuba (both of which, in contrast to Russia, face extreme situations)," said the head of the legal service of the Communist Party, Vadim Soloviev.

Viktor Averkov, an expert at the Problem Analysis Center, believes that Russia has no need to call up women. "We do not face an immediate external threat of war requiring total mobilization," Soloviev said.

Editor-in-chief of the newspaper National Defense, Igor Korotchenko, believes that Israel's experience is not indicative of Russia's situation. "Israel is encircled by enemies, and maintaining a combat-ready force is for them a matter of national survival. Russia's armed forces can manage with just male recruits," said Korotchenko.

Valentina Melnikova, chairman of the Committee of Soldiers' Mothers, described the idea of calling up women as crazy. "We don't have the facilities to call up women. Under contract, yes, it's possible, because they are accommodated in barracks and hostels with separate sections for women," she told the radio station Russian News Service.

Melnikova added that Russian officers are not at all ready to be subordinate to women. “Army talk is based on Russian ‘mat’ — it's not just swearing, it's an entire language," she said.

Tatiana Moskalkova proposes that, as in Israel, female soldiers in Russia should enjoy preferential treatment. "In Israel, girls are allowed to sleep at home; but, in the morning, they go and serve, for which they receive good money. In addition, they are given preference in college enrollment, and they also receive professional training during their time in uniform," she said.

Anna Ukolova, a spokesperson for the IDF, claims that female recruitment produces good results. "The effect is only positive (especially when women are engaged as instructors), regardless of the troop specialization. Women here can be tank instructors or fighter pilots," Ukolova said of the experience in Israel.

However, she is not sure that the positive experience would be repeated in Russia. "Because Israel is a small country, women are free to tend to family matters while serving in the army. In Russia, as far as I know, military service often takes people far from home," said Ukolova.

According to state secretary of the Russian Ministry of Defense, Nikolai Pankov, the Russian Armed Forces contained 667,000 personnel as of April 2012. Including physicians, reserve officers, and students and teachers at military schools, the number was just shy of 800,000. At the end of 2011, Gen. Nikolai Makarov, chief of the general staff of the Armed Forces of Russia, stated that the number of service personnel had been reduced to one million.

The article is the combined report based on materials from the Izvestia newspaper, RIA Novosti and Vedomosti.ru.