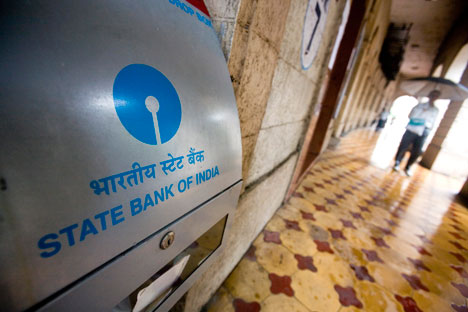 State Bank of India and Russian Agency for Direct Investments are likely to sign a Memorandum of Understanding during the upcoming Indo-Russian summit. Source: Bloomberg

State Bank of India and the Russian Agency for Direct Investments are likely to sign a MOU during the upcoming Indo-Russian summit.

State Bank of India and Russian Agency for Direct Investments are likely to sign a Memorandum of Understanding during the upcoming Indo-Russian summit, scheduled to be held in Delhi on Monday, in order to provide the much-needed boost to bilateral investments.

Despite the fact that India and Russia have large and complementary economies, their bilateral investments are stagnated at a low level. A host of agreements including the ones on protection of mutual investments and avoidance of double taxations have failed to raise mutual investments to the desired level over the years.

Cumulative Indian investments in Russia are estimated to be around $8 billion and exceed the volume of Russia investments in India, which is to the tune of $5 billion.

While India’s largest investments in Russia are in the energy sector, major Russian investment is concentrated in India’s telecommunication sector.

ONGC Videsh Ltd has invested $2.7 billion in the Sakhalin-1 oil and gas project picking up a 20 percent stake from Russia’s energy giant Rosneft and this remains India’s largest investment abroad till date. ONGC Videsh Ltd purchased a London –listed energy company called Imperial Energy for $2.5 billion that operates in  West Siberia’s Tomsk  region, which has not lived up to Indian expectations .

Indian banks have made a dent into the Russian banking sector with State Bank of India and Canara Bank setting up the Commercial Bank of India, a joint venture for promoting trade and economic activities between the two countries. ICICI is the other Indian bank that operates in Russia through the purchase of a local entity.

Russian investments into the Indian economy include Sistema’s $3.5 billion investment in the telecommunication sector, truck assembling in Karnataka and West Bengal and rubber production in Jamnagar.

Some Russian investments, particularly Sistema, face serious problems that are likely to figure in the bilateral talks during President Putin’s upcoming official visit to India.  Russian proposals for building a steel plant in Karnataka by steel major Severstal and production of titanium in Orissa are yet to take off the ground, which is a cause of mutual concern.

A major bottleneck in Indo-Russian mutual investments is the lack of interest on the part of private sectors of both economies. Although the largest chunk of both economies is controlled by private sectors, important private players of both countries are yet to look at each other seriously. Lack of information and a stereotypical mindset create hurdles in bringing the private players of both countries together.

Creation of a joint CEO Council headed by India’s well-known tycoon Mukesh Ambani and Russia’s famous oligarch Vladimir Yevtushenkov and the organisation of annual investment forums are steps in right direction for promoting mutual investment. Unfortunately, they have not lived up to the expectation so far.

India is likely to invite Russia during the forthcoming bilateral summit to participate in its promising Delhi-Mumbai industrial corridor development programme worth $90 billion. Similarly, Russia is keen on Indian participation in the massive modernization programme of its pharmaceutical sector, which would be a win –win situation for both sides.

It is welcome news that leading Indian pharmaceutical companies have woken up to engage themselves with Russian partners under Russia’s huge Pharma-2020 programme.

Information Technology is one of the strategic sectors indentified for Russia’s economic modernisation and is a focus area at the Skolkovo Innovation centre in the Moscow suburbs. Given India’s capabilities and advantages in IT sector, there is significant scope for mutually beneficial cooperation in this area.

The diamond industry is yet another area where bilateral investments can take economic cooperation to a new pitch. Russia, controlling one forth of global diamond reserves and India, home to 75 percent of the cutting industry, makes the countries natural partners in this area. Experts believe that productive cooperation in this area can increase trade turnover by $500 million at the least.

Russia’s WTO membership and the latest round of liberalisation in the Indian economy definitely opens new avenues for investment cooperation between the two countries.

More than 400 projects have been completed over the years under Indo-Russian long term cooperation programme in science and technology, the largest of its kind in this field between any two countries in the world and one of the pillars of the Indo-Russian strategic partnership. However, the lack of commercialisation of the results of these projects is serious issue in the programme. It is very important to mobilise investments for industrial application of the results.

That is why the signing of the document for the creation of the Joint Private Public Investment Fund expected to take place during President Putin’s forthcoming official visit to Delhi would provide the much-required impetus to investment cooperation between India and Russia.