The end is near, so finish that novel 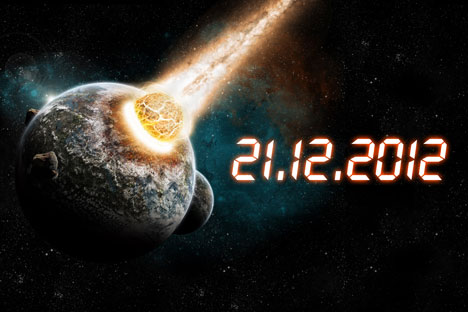 Maya thought that end of the days will happen this Friday, but what Russian writers think? Source: Shutterstock / Legion media

Tolstoy's literary heirs talk about what they would do in their final hours.

The editors at Russia & India Report pretty much agree the world will not end on Friday, December 21.

But still, the End of Days disciples have given everyone pause. Are we living our lives fully? How do we really want to spend the time we have left, whether it is two days, twenty years, or more? What would you do if you found the world was coming to a sudden and savage end, after all?

Russia’s writers are known throughout the world for their deep and unerring existentialism. In the spirit of the moment, we asked the most prominent writers, “How would you spend your last day? What if the Rapture comes? What would you like to be doing?”

The following are the answers we received from Tolstoy’s literary heirs.

If nothing else, the end-of-days discussion may help with procrastination.  Enjoy!

View the gallery: Moscow the day after Doomsday

German Sadulaev’s first novel, “I am a Chechen” has been translated into English. The Grozny native, a highly entertaining speaker who attended “Read Russia” at the New York Book Fair in June, agreed to speak to RIR about the end of the world.

“I’m not quite sure about the mass end of the world on the 21st or any other day. It seems to me that this "end of the world" mess will stay here for a long time. Each of us is waiting for our own personal "end of the world." Therefore, each of us will need our own ‘Personal Jesus.’ By the way, this song is not by Depeche Mode, but a cover of old dog Johnny Cash's song,” Sadulaev said.

“My plan for tomorrow is as follows: I'm at the notary at 11 a.m. to sign papers. Work out in the gym after that. In the evening, I will sit down with a book. Read what? Of course, the Bhagavad-Gita [a scripture-like section of the Mahabharata]. Then I will go to sleep," he added. "And when I wake up, the world will be different ...”

"I would probably catch up on some sleep,” said the St. Petersburg (then Leningrad) native, who moved to New York with his family when he was a teen. “I'm sure the end of the world will be very noisy, so I'd like to get some rest before the fun starts," the droll writer said.

Sergei Shargunov represents Russia’s new wave of young writers. The 32-year-old novelist and poet of six books won the Debut prize in 2001 and his new work, “The Book without Photos,” made the shortlist of the prestigious National Bestseller prize last year.

When asked how he would spend his last days, Shargunov said, “I’ll try to answer philosophically.

Leo Tolstoy said that we should learn from peasants how to live and die, to adopt their attitude toward the finiteness of life. But Tolstoy was very paradoxical and said that every single day we should start from the beginning [start over], so he suggested we break the rules of the typical peasant’s way of life, and each day renew ourselves.”

“I think that if the end of the world suddenly occurred, I'd act according to the principle ‘be what you’re supposed to be and do what you are supposed to do.’ I'd go on playing with my kid and have fun, and go on writing my novel without thinking it is the last,” he said.

“It's worth remembering Pushkin's 'A Feast in Time of Plague' - that's not only exposure of heartlessness, but also a tribute to the holiday celebration despite everything,” Bykov added.

Dmitry Bykov is known as one of Russia’s national treasures. He is a satirist, poet and novelist. (His epic “Living Souls,” is published in English.)

Bykov said that if he knew the end of days was coming soon, he’d try to spend as much time as possible with family.

“Because of my work I haven't managed it before,” he mused. “But also I wanted to share a secret with you: there will be no end of days! Because it happens every day when someone dies, and at the same time the life is renewing daily.”

Prilepin wasn't sure he has an exsact plan of activieties: "I don't know what would I do, probable I won't do something special, just live my usual life, tried to live further."