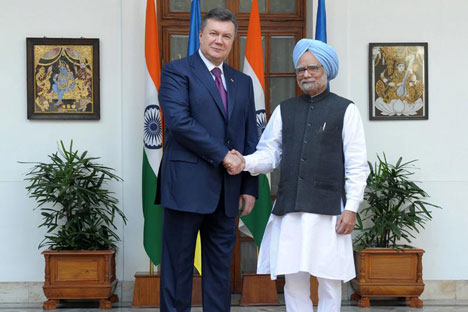 Kyiv is going to give Moscow stiff competition to Russia here on in all areas of bilateral cooperation that have defined Indo-Russian strategic partnership. 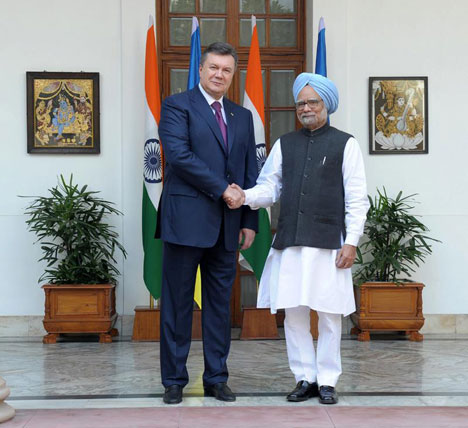 India-Ukraine bilateral ties are developing on the pattern of Indo-Russian relations. India and Ukraine have for the first time just signed an inter-governmental agreement in the defence sector and have also pledged to take forward their bilateral relations to a new high in areas like space, science and technology and nuclear energy. These are bad tidings for Russia.

The rate at which the Indian ties with Ukraine have blossomed in past few years leaves none in doubt that India and Ukraine, a former Soviet Union entity, are on course to a strategic partnership, though the two sides have thus far refrained from using this terminology. Also, Ukraine is now not only nurturing this relationship with India on the time-tested model of Indo-Russian ties but also coming out of the Russian shadow to give a few lessons in diplomacy to Ukraine’s former master, is significant.

This came about during the first State visit of Ukraine’s President Viktor Yanukovych to India (December 9-12, 2012). During this visit Indian and Ukraine signed four agreements and a Memorandum of Understanding in core areas mentioned above. The bottom line is clear: that Ukraine is going to give Russia stiff competition to Russia here on in all areas of bilateral cooperation that have defined Indo-Russian strategic partnership: defence, nuclear, space and science and technology.

Most importantly, Ukraine is all set to poach into the Russian stronghold when it comes to bilateral cooperation with India: defence sector. India is in enviable position wherein it is being wooed by Russia as well as its neighbour: Ukraine. India is being offered the same technology and similar arrangements in the defence sector like joint R&D, joint production and export of the jointly produced defence hardware to third countries as Russia has been offering to India. In other words, Ukraine has replicated the Russian strategy to engage with India, thus increasing the competition for Moscow from its own backyard.

Russia as a business gateway to Kazakhstan, Belarus and Ukraine

This means that Russia will now be competing with Ukraine in winning defence deals with India. In recent past, the Russians have lost on many big-ticket Indian defence deals, mainly to countries like the United States, France and Israel. But now the Russians will have to compete with a country which used to be a part of the Soviet Union just about two decades ago. It is an important development and a reality check for Russia.

Ukraine opened up a new chapter with India when the two sides inked a vital defence cooperation agreement during President Yanukovych’s just-concluded India visit coinciding with the 20th anniversary of India-Ukraine relations.  Indian Defence Minister A.K. Antony and his Ukrainian counterpart Dmytro A. Salamatin signed an inter government agreement on cooperation in the field of defence. The agreement will provide the framework for expanding military technical cooperation on an institutionalised basis. It envisages mechanisms to be set up for promoting defence cooperation. It will pave the way for moving the relationship to a new plane, that of joint research and development in the future. The joint statement by the two principals Indian Prime Minister Manmohan Singh and Ukrainian President Yanukovych, also had a significant clause for export to third countries and transfer of technology. This would imply that Ukraine is willing to provide India the leeway for export of jointly developed products to a third country.

The defence agreement would open new vistas of cooperation between India and Ukraine especially in the areas of research and development; joint design and development of systems and equipment; export to third countries; and transfer of technology. The agreement would also facilitate regular dialogue between the two sides in new areas of cooperation and smooth implementation of ongoing projects.

The blossoming India-Ukraine defence partnership has lots of implications for Russia. For years Ukraine has been overhauling and modernising the Indian Air Force’s AN32 fleet, based on contracts signed in 2009 worth about $520 million. The Indo-Ukrainian defence partnership in this context is based on a $400 million contract for life extension of the aircraft, and about $120 million was for engines. The contract was signed for 100 aircraft. A number of aircraft are to be upgraded in Ukraine, most of them in India.  Of this, 25 aircraft have been already upgraded in Ukraine of the 40 while remainder 60 will be upgraded in India.

Ukraine’s USP for India is that nearly 30 percent of the Soviet defence industry was located in Ukraine and the modernisation of the AN 32s is being carried out there. India and Ukraine had signed a deal in 2009 for upgrading 100 AN-32 aircraft of IAF of which 25 have already been upgraded in Ukraine while the rest would be modernised at IAF facilities in Kanpur.

For past three to four decades, ship engines such as the Zorya gas turbines powering Delhi class warships of the Indian Navy are also being regularly sourced from Ukraine. Besides, MiG-23 engines are also being overhauled in Ukraine. Motor Sich of Ukraine supplies helicopter engines.  Some of the agreements in the pipeline are 'Kolchuga' electronic support measure system for tracking stealth warplanes and the R-77 missile. The India-Ukraine defence partnership is all set to go from strength to strength and more intense collaboration in aerospace projects is also on the anvil.

Ukraine is today among the top ten defence manufacturers in the world, something Kiev owes to Moscow as a large number of defence facilities of Ukraine were developed during the Soviet era. These facilities included manufacture of fighter planes and tanks. Now Ukraine has come up as a tough competitor to Russia in these very areas.

Significantly, Ukraine is also set to give Russia the run for its money in the ambitious Indo-Russian MTA project as Ukraine has also offered to co-develop a transport aircraft with the Indian firms which could be used for export purposes also. The facilities to develop transport aircraft were based in Ukraine in the Soviet era and these have been maintained even after its break-up from the erstwhile USSR.

Ukrainian engineers and technicians have also been involved in the Kudankulam nuclear power plant coming up in the southern Indian state of Tamil Nadu with the Russian assistance. The Ukrainian signatures are also visible in another Indo-Russian defence deal: Soviet aircraft carrier Admiral Gorshkov that is being retrofitted and modernised by Russia for the Indian Navy. Indian naval pilots training for taking off from aircraft carrier now called the INS Vikramaditya are training in Ukraine at its shore-based take off and landing facility.

An important point in this context is that India seems to have overcome some of its inhibitions with regard to Ukraine when it comes to dealing with Kyiv as a defence partner. Ukraine has a robust defence relationship with two of India’s most important strategic challenges: Pakistan and China. Ukraine has been having very close defence ties with both Pakistan and China. The Chinese aircraft carrier was acquired from Ukraine and also refurbished with the Ukrainian help.

While the age-old, time-tested Indo-Russian strategic ties will not be affected by the burgeoning India-Ukraine relationship, Russia faces a stiff challenge from its own backyard in taking its ties with India to the next level. Needless to say, the Ukrainians will be able competitors for the Russians.