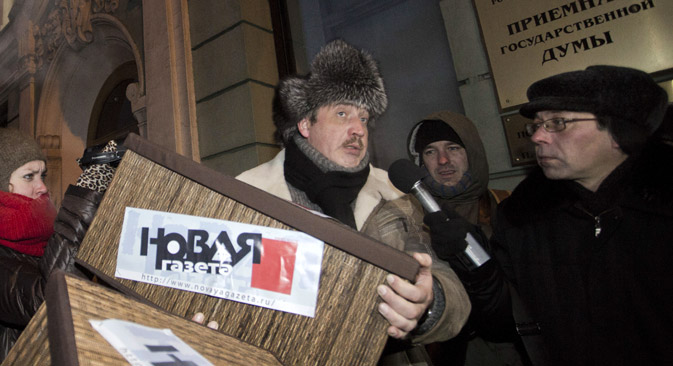 The U.S. initiative to include those who voted for a symmetrical response to the U.S. in the Magnitsky list sparked the tensions around anti-Magnitsky bill. While State Duma deputies warn against it, some human rights activists support this stance.

The U.S. initiative to include those who voted for a symmetrical response to the U.S. in the Magnitsky list sparked the tensions around the Dima Yakovlev bill. While State Duma deputies warn against it, some human rights activists support this stance. Yet Russia's Presidential Council for Human Rights argues that the move may spark political war between two countries.

State Duma Vice-Speaker lists conditions on which Russia may not ban U.S. adoptions

If the idea of including State Duma deputies who voted for a symmetrical response to the U.S. in the Magnitsky list comes true, it will not remain unanswered by Moscow, deputy chairman of the State Duma Committee for International Affairs Vyacheslav Nikonov believes.

"The reaction to the idea can be only negative," he said to Interfax on Sunday. "If things really come to that, a symmetrical reply will follow."

In his opinion, it is difficult to find similar cases in the entire history of diplomacy. "This may be the first case in history when the issue of  sanctions against lawmakers in a foreign country would be raised on such a scale. This is an unprecedented situation," he said.

Up to 50 000 people, including both Americans and Russins, had urged the U.S. White House to consider including Duma deputies in the Magnitsky list.

The petition for applying the Magnitsky Act to the Duma deputies who supported the Dima Yakovlev bill was posted on the White House website. For the U.S. administration to consider it 25,000 signatures should be collected by Jan. 20.

"We, the undersigned, are outraged with the actions of Russian law-makers, who breached all imaginable boundaries of humanity, responsibility, or common sense and chose to jeopardize the lives and well-being of thousands of Russian orphans, some of whom, the ill and the disabled ones, now might not have a chance of survival if the ban on international adoption is to be put in place," the petition says.

"We urge this Administration to identify those involved in adopting such legislature responsible under the Magnitsky Act and thus included to the relevant list," the petition says.

Meanwhile, Head of the State Duma International Affairs Committee Alexei Pushkov sees no legal reasons for Washington complying with the petition of U.S. citizens to add State Duma deputies who voted for the anti-Magnitsky bill to the list of persons who will be denied entry to the United States and to whom other sanctions will apply.

"The administration of the U.S. president does not have any legal grounds for complying with the petition because the Magnitsky Act adopted by Americans does not imply any sanctions in response to the ban on the adoption of Russian orphans by Americans," he said to Interfax.

Pushkov said relations between Moscow and Washington can badly deteriorate "if the White House decides to include State Duma deputies in the so-called Magnitsky List on any pretext."

"If this happens, we will follow suit, and then the situation will run into a blind alley because it will develop into an open political war between our countries. I don' think the U.S. administration is interested in that," Pushkov said expressing his own opinion.

"A cannibalic law has been adopted. Our deputies have done enough for being included in the Magnitsky Act and they realize that," Alexeyeva told Interfax on Sunday.

"Our constitution prohibits deputies to adopt laws that infringe human rights. Do we have the right to a family? Sure. Does the bill adopted by the State Duma violate the right of every unhappy child at an orphanage longing to be adopted? Sure," Alexeyeva said.

Alexeyeva told Interfax on Friday that she would not ask President Vladimir Putin to veto the Russian bill retaliating against the Magnitsky Act. "I will not send the appeal. I have no hope that something can be changed," she said.

Head of the Presidential Council for Human Rights Mikhail Fedotov regards the initiative of blacklisting Russian Duma deputies as harmful.

"Confrontation should not be built up," he said. "One should not be fanning anti-American or anti-Russian hysteria, but stop in good time and take half a step backward."

In his opinion, 'impermissible amendments', namely those banning the adoption of Russian children by Americans, should be dropped from the bill passed by the State Duma in the third reading.

"Very many reasons of ethical and legal nature are pushing us to that," he said.

"The preamble to the agreement says that a child should grow up in a family environment to guarantee full and harmonious development of the personality. And if it is impossible to preserve the child's own family, he or she should be placed in a substitute family in the country of birth. And only if that is impossible, international adoption should be considered," he said.

"Article 6 of the Russian law says that its effect applies to the citizens of countries that will pass laws similar to the Magnitsky Act. Hence, if, for instance, France, Italy, Germany and Great Britain support the American initiative, citizens of those countries will automatically become unable to adopt Russian orphans," he said.

"But we have never had any complaints about children adopted to those countries. So it turns out that children, our children become pawns in political games. The council believes that this is impermissible," Fedotov added.

On Friday the State Duma passed in the third and final reading the 'anti-Magnitsky bill' also known as the 'Dima Yakovlev bill'. Initially the bill contained measures against individuals responsible for the violation of the rights of Russian citizens.

For the second reading several amendments were proposed implying a ban on the adoption of Russian children by U.S. citizens and also on the operations of organizations helping to find children for adoption in Russian territory.