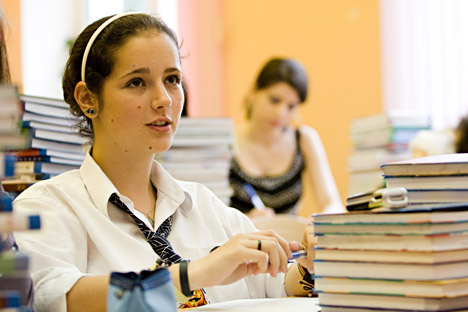 Russian students face some challenges, when it comes to applying knowledge in practice.Source: ITAR-TASS

The Russian education system is recognized as among the top 20 in the world. There is, however, one problem: when it comes to applying knowledge in practice, Russian students face some challenges.

In recent years, the Russian education system has been going through a very difficult period of reform. Every newfangled innovation goes under the microscope and is often subjected to severe criticism. Consequently, the new bill on education was drafted no fewer than five times; following public consultations, more than 12,000 amendments were made.

It is no small wonder that Russian society is highly critical of the country's current education system. Still, in such situations, it is often useful to take a step back and look at the problem from the outside. Some interesting nuggets can be revealed. For example, according to a recent study commissioned by the British magazine The Economist, Russia ranked 20thon the list of the world's best education systems in developed countries.

As the authors of the study say, governments in these countries are paying close attention to the matter, and, crucially, there is a real culture of education.

Indeed, if the topic of improving Russia's education system was of no interest to anyone, the discussion of the bill would hardly have turned into a free-for-all between supporters and opponents of the reforms.

Help for supports of the reforms unexpectedly arrived in the form of the PIRLS (Progress in International Reading Study) and TIMSS (Trends in Mathematics and Science Study) international monitoring results.

These comprehensive studies are conducted every few years in the majority of developed countries. The data they reveal give a fairly clear idea of the state of the education system in any one country.

PIRLS assesses the reading and comprehension of elementary school students, while TIMSS tests the mathematical and scientific knowledge of fourth- and eighth-graders.

The 2011 results give Russia reason to be proud. Elementary school students took second place (out of 46), after Hong Kong. Secondary school pupils also did not disappoint. Fourth-graders took ninth place in mathematics, ahead of the United States, the Netherlands, Denmark, Germany, Austria, and Sweden. Eighth-graders landed the sixth spot, overtaking the United States and all of Europe, behind only the Pacific region.

Whereas Russian elementary education has been a permanent fixture at the top in recent years, the results of high school students came as a big surprise: in mathematics, they jumped up 27 positions. According to Galina Kovaleva, director of the Center for Educational Quality Assessment under the Russian Academy of Education, it is the most improved performance among all countries.

A positive factor in this success was the 2010 introduction of the unified national mathematics examination, which allows capable students who did not finish school to enter college without entrance exams. The unified exam did, however, provoke controversy, and it still has its fair share of critics.

Despite this success, it is still too early for Russia to rest on its laurels. According to the results of another authoritative international study — PISA (Program for International Student Assessment) — which assesses the skills of 15-year-olds, Russia comes in below average.

The PISA assessment measures not only knowledge but also the ability to use it in real life. For example, in the 2009 test, a stumbling block for Russian pupils was a little problem about penguins.

The task was to explain the reasons for the quantitative changes in the penguin population by performing a keyword search on the Internet. Russian students completely flopped, as it became apparent that Russian students had limited ability in finding and analyzing the relevant information.

The most recent PISA tests were held in April 2012, and the results will be published in early 2013.

It seems that real change will have to wait until Russia's new education standards begin to bear fruit. These standards include a much greater focus on individual projects, with an aim of combining theory and practice.

Another issue the Russian education system faces is how to work with talented children. According to Galina Kovaleva, 21 Russian regions have launched a pilot project to monitor the achievements of elementary school students. The main task is to identify the most talented pupils and draw up individual programs of study in accordance with their needs.