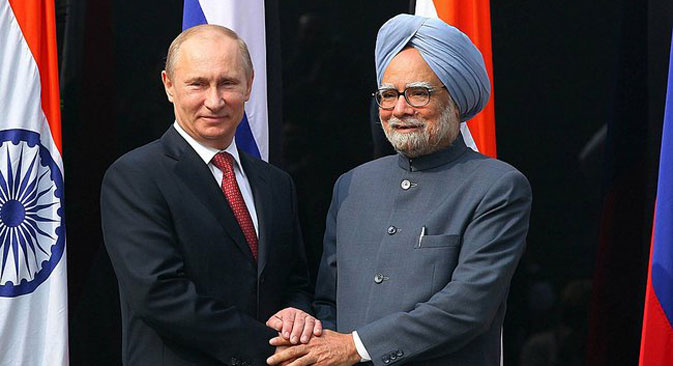 The most important highlight of the summit was the finalising of defence contracts worth about $5 billion, reaffirming Russia’s continued domination in the Indian defence sector.

The 13th Indo-Russian summit between visiting Russian President Vladimir Putin and Indian Prime Minister Manmohan Singh concluded in New Delhi on Monday with the signing of ten bilateral documents, including eight agreements and MoUs in such diverse fields as defence, science and technology, space, investment, software, pharmaceuticals and culture. The most important highlight of the summit was the finalising of defence contracts worth about $5 billion, reaffirming Russia’s continued domination in the Indian defence sector.

Prime Minister Manmohan Singh paid glowing tributes to Putin’s statesmanship and the way he has steered the ship of Indo-Russian friendship for over a decade. “President Putin is a valued friend of India and the original architect of the India-Russia strategic partnership,” Singh said.

The defence deals which were given the green signal by the two principals are a $3.5 billion deal for India to purchase 42 Sukhoi Su-30 fighter jets and a $1.3 billion contract for the delivery of 71 Mil Mi-17 military helicopters. The execution of these defence deals illustrates that Russia continues to be the main partner of India in the defence sector. During the 2000-2010 decade Russia bagged Indian defence contracts worth $30 billion for supplies of hundreds of fighter jets, missiles, tanks and other weapons, a large part of which were license-produced in India – the biggest USP of Russia for India.

The summit was held under the shadow of the unprecedented and spontaneous protests by youngsters over the brutal gang rape of a 23-year-old girl in Delhi on the night of December 16. The continuing protests forced change of the talks venue from Hyderabad House situated on the India Gate hexagon (the epicentre of people’s protests for last one week) to the Prime Minister’s residence at 7, Race Course Road. As a result of the last-minute change of the summit venue, the talks began behind schedule and continued till afternoon, forcing rescheduling of Putin’s formal meeting with the Indian President Pranab Mukherjee and other political leaders like United Progressive Alliance (UPA) chairperson Sonia Gandhi and Leader of the Opposition in the Lok Sabha Sushma Swaraj.

Significantly, there was no joint presser by Putin and Singh at the end of the talks. This is the first time in 13 Indo-Russian summit meetings when a joint press conference by the two principals was not scheduled. However, Indian diplomats dismissed speculations that the joint presser was omitted at India’s request to shield Manmohan Singh from foreign correspondents’ likely questions on the Delhi gang rape which could have de-focused the main event. Indian officials maintained that a joint presser is not mandatory and pointed out that it was done in view of the extremely tight schedule of Putin who, as per the original itinerary, was to be in India only for 15 hours. Putin’s official engagements were to start only at 11.30 am and he was to depart for home at 4.30 pm, thus leaving just about five hours for his official programmes.

The depth of the Indo-Russian strategic partnership was reflected in the numerous defence deals signed during Putin’s brief visit to India on Monday. The most important new defence deal signed on Monday was a $4 billion contract enabling India to buy additional Sukhoi 30 MKI fighters from Russia. These fighter aircraft will be equipped with the BrahMos cruise missiles, an Indo-Russian joint venture. The contract is for delivery of 42 technological kits for SU-30MKI aircraft licensed production. The Protocol-II on licensed manufacturing of additional 42 SU-30MKI aircraft units was signed during the annual summit last year. The current contract is a follow up to this protocol.

Besides, the other military-technical contract signed by India and Russia relates to delivery of 71 Mi-17V-5 helicopters. An order for procurement of 59 Mi-17 v5 MLH was agreed to in February 2010, which was subsequently increased to 71. The current contract is in context of the order.

Another key agreement that was signed in the defence sector relates to a Joint Venture Agreement between Elcom Systems Private Ltd. and OAO "Vertoleti Rassi” (JSC "Helicopters Russia”). The joint venture aims to set up in India, a modern industrial facility for manufacturing of Russian models of helicopters (Ka- and Mi- brands). The JV will serve as an industrial base for hi-tech rotorcraft products from Russia to India and shall contribute to the development of the domestic aerospace industry. The enterprise will be eligible for implementing offset projects under various procurement tenders in India. JSC "Russian Helicopters” is a leading player in the global helicopter industry engaged in the business of modern civilian and military helicopters and training of aviation personnel. Elcom Systems is an established entity in the Indian telecommunications, security and navigation sectors.

The two leaders also agreed to a Joint Investment Fund and a Memorandum of Understanding to promote direct investment between Russia and India was signed between State Bank of India and the Russia Foundation for Direct Investments (RDIF). The MoU envisages investments up to $2 billion in important bilateral projects or companies, privatisation and other opportunities.

RDIF is a $10 billion sovereign-backed Russian private equity fund established by the Russian Government to co-invest alongside global institutional investors. Since its inception in 2011, it has led investments totalling $1.5 billion in Russian companies together with some of the largest asset managers in the world.

It has been India’s long-standing grouse that Russia has not been fully exploiting vast opportunities offered by the Indian pharmaceutical industry. This Indian concern was addressed effectively during Monday’s summit and the two sides signed a MoU in this context. The MoU is for Joint Venture arrangement between Elder Pharmaceuticals Ltd., Mumbai and Pharm Eco of Russia. The agreement is aimed at establishing and strengthening technology partner relations between the two enterprises in software development, systems integration, product engineering, professional services for and marketing of NIS products and TCS Solution frameworks. The areas of cooperation visualize concern sectors such as information technology enabled services, telecommunication systems and manufacturing.