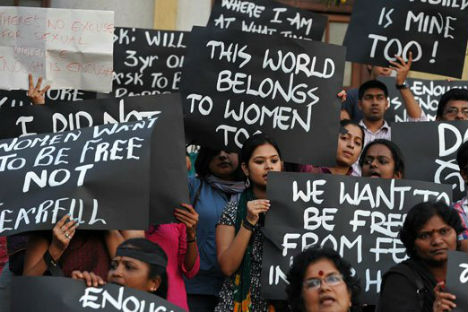 The protest in New Delhi against a brutal gang-rape of a 23-year old a week ago. Source: AFP/ East News

Indian media focus almost exclusively on the protests demanding justice for the victim of a gruesome gang-rape in Delhi.

A cursory glance at any private television station in India on the morning of Russian President Vladimir Putin’s visit will reveal that the main news story of the day is the protest in New Delhi against a brutal gang-rape of a 23-year old a week ago.

For the past few days, thousands of university students and other young people have gathered near the India Gate in a largely peaceful protest against a growing number of rapes in India’s cities. Rapes are so common in India that they often make it to page 10 of leading newspapers. Last week’s gang-rape in Delhi though, shocked the nation on account of its sheer brutality.

A medical student and her male friend were returning home after watching a film in the Indian capital and decided to take a private bus at around 11 pm. A group of 6 men in the bus physically assaulted the girl and her friend and then gang-raped her. It didn’t stop there. They continued to brutalise her with an iron rod for over an hour and finally threw her and friend out of the moving bus. The girl, whose name hasn’t been revealed to protect her identity, is in a critical condition at a Delhi hospital but has shown tenacious fighting spirit to stay alive.

While the police have managed to arrest all 6 accused, frustrated members of the youth are protesting in Delhi, demanding speedy justice. Court cases in India tend to drag on for years and victims and their family member often end up in a web of police and court bureaucracy. Some of the extreme elements among the protestors have called for the death penalty for the rapists, while others just want to ensure the case is fast-tracked.

The image of one hundred thousand policemen standing outside the Indian president’s house and wielding sticks at peaceful protestors reminded many senior citizens of the days of the British Raj, when law enforcers would assault Indians on the orders of their colonial masters. Some hooligans did manage to infiltrate the crowd of protestors and hurled stones at the police, but many of the protestors insist that the violence was initiated by the police, who used tear-gas and water cannons. 65 years after independence, it’s a sad fact that there have been no police reforms in India.

Most Indians are frustrated with the fact that the police force in India are mostly concerned with protecting politicians and VIPs and rarely come to the aid of common citizens. In many cases, the police are accused of being in collusion with the criminals. India has several politicians with criminal records and politics has now become the preferred destination of criminals looking to make a fast buck. To make matters worse, two sitting members of parliament and six legislators have pending cases of crimes against women, according to a think tank.

I wonder what Vladimir Putin will make of these protests. In the wake of the Beslan massacre in 2004, the Russian President said that the people had lost faith in the law-enforcers in the country. “We allowed corruption to affect the judiciary and law enforcement systems,” he said in his famous speech. Russia was angry after that terrorist attack and Putin took it as his responsibility to first address the nation and then bring about changes in the country. In India, we may be faced with a situation where the authorities would look at public anger dying down and life going back to normal.

I guess Putin would be able to see the stark contrast in the style of handling a crisis between himself and Indian Prime Minister Manmohan Singh. The latter is seldom seen or heard speaking about important issues that affect the nation.

We may see up to 12 landmark agreements being signed between India and Russia later in the day, but not much time airtime is likely to be dedicated to the summit as India focuses on some of the largest spontaneous protests in its history as an independent nation.