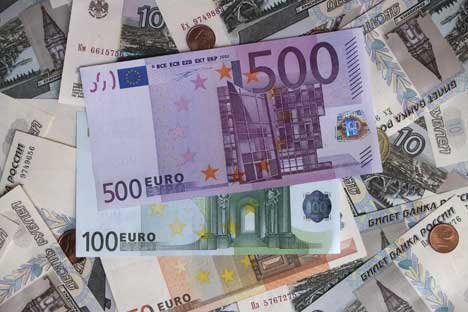 It is a tough proposition for the EU to accept Russia formally as a high priest into its Eurozone sanctum sanctorum.

An aside can sometimes steal the limelight away from the main diplomatic event. The unproductive summit meeting between the European Union and Russia in Brussels on Friday ended up with a stunning aside.

No, I am not talking about Syria – or the Magnitsky law.

What leaped out of the Brussels meet was the offer made by President Vladimir Putin during his interaction with the media on Friday about Russian money salvaging Cyprus’s economy. Prima facie, it is a generous offer. The facts are clear.

The Cyprus economy urgently needs recapitalization to the tune of an estimated 15 billion euros. But then, assuming money grows on trees in Brussels, Germany still feels troubled that Russian businessmen operating in Cyprus may turn out to be the beneficiaries of any EU rescue package. (Spiegel recently put the Russian deposits in Cyprus banks at $26 billion; Cyprus’s GDP comes to a mere 17 billion euros!)

Meanwhile, Cyprus turns to Russia for a second loan of 5 billion euros in addition to the 2.5 billion euros that Moscow gave in end-2011. But Moscow is evasive – won’t say Nyet or Da.

Of course, Putin’s offer cannot be easily spurned. But it is a tough proposition for the EU to accept Russia formally as a high priest into its Eurozone sanctum sanctorum. Needless to say, there are geopolitical implications. The Bible says, “the borrower is servant to him that lendeth.” So, EU will knock on all available doors first – IMF, European central banks, et al – except Russia.

The problem is political. Cold-war resentments are still at play, as Spiegel noted. The exchange at Brussels on Friday underscores that European resistance to Russia’s desire to integrate is indeed deep-rooted.

The paradox is that the EU and Russia are getting increasingly intertwined in economic terms. Trade is flourishing – $409 billion in 2011. Moscow has given a big hand to shore up the euro by holding 41 percent of its foreign currency holdings in euro. Around 80 percent of the EU’s foreign investment has been to Russia. Some 20000 European companies have subsidiaries in Russia – 6000 of them German companies. The EU, in turn, accounts for 45 percent of Russia’s exports.

In some ways, Russia’s predicament vis-à-vis the EU is in some ways comparable to Turkey’s. Despite Turkey being a member of the EU’s Customs Union and of NATO, there is a lot of prejudice in the European mind against Ankara in political and cultural terms, which the Turks are expected to bear with the patience of a saint. The Europeans apparently could still hear the knock of Suleiman the Magnificent on the gates of Vienna, and wouldn’t let Turks become Europeans.

But the shoe is now on the other foot. The EU is stagnating, whereas Turkish economy is prospering. The German Foreign Minister Guido Westerwelle warned last week that Turkey’s interest in joining the EU could be waning. Indeed, the Turks have had enough of being lectured about human rights and democracy by the West.

Maybe, there is a moral here for the “westernists” in Russia. Westerwelle’s remark underscores that the meaning of Turkey’s shift towards Asia is registering on the European mind.