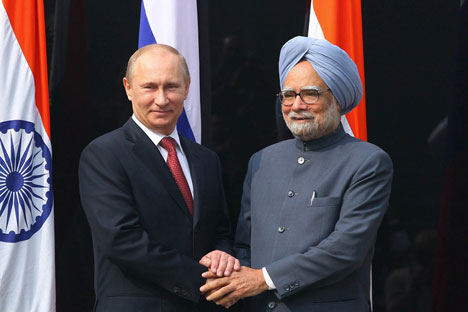 Long term allies also agree to step up cooperation in multilateral forums such as BRICS and G20.

At the 13th India-Russia Annual Summit in New Delhi, the two long-term allies were in agreement on the need for long-term peace in Afghanistan post-2014, and issued a guarded joint statement about Syria calling for a halt to violence in the west Asian country ravaged by a civil war.

“India and Russia share the objective of a stable, united, democratic and prosperous Afghanistan, free from extremism, terrorism and external interference,” Indian Prime Minister Manmohan Singh said after concluding the summit-level talks with Russian President Vladimir Putin. “We reviewed the ongoing developments in Afghanistan, and agreed to work together against threats posed by extremist ideologies and drug trafficking,” Singh said.

In a joint statement released after the talks, Russia and India said, they support the efforts made by the Afghanistan government to reconcile with the Taliban. “The sides support the efforts made by the Government of the Islamic Republic of Afghanistan to establish a peaceful dialogue with the armed opposition, provided that the process goes on under the Afghan leadership and that the fighters meet the redlines enunciated by the international community.” Moscow and New Delhi called for the Taliban to recognise the Afghan Constitution, to renounce violence and break ways with al-Qaeda and other terrorist organisations.

In a reference to the war-torn west Asian country, Moscow and New Delhi called for an end to violence.  The sides “expressed concern over the deteriorating security situation and continued violence in Syria and called upon all the parties to stop violence and engage in all inclusive national dialogue in order to resolve the conflict through peaceful political means,” according to the joint statement. The statement mentioned the UN Security Council Resolutions 2042 and 2043 and the Joint Communiqué of the Geneva Action Group.

Russia and China have drawn heavy Western criticism for their refusal to support UN sanctions against Bashar al-Assad's regime, Moscow’s sole remaining ally in the Arab world. Russia has said that the proposed UN resolutions in fact betrayed a pro-rebel bias and would do nothing to bring peace. As a non-permanent member of the UN Security Council, India voted in favour of the resolutions against Syria, under pressure from New Delhi’s Arab allies.

On Iran’s nuclear program, Moscow and New Delhi called unilateral sanctions “counter-productive.” While asserting that Teheran had the “right to develop research, produce and use nuclear energy for peaceful purposes in conformity with its international obligations,” the joint statement from New Delhi called on Teheran to comply with United Nations Security Council resolutions and to cooperate with the IAEA.

The Russian President in an op-ed in the Indian daily The Hindu said the allies would cooperate in multilateral forums like BRICS and G20. “I would like to note that our joint work in the BRICS becomes increasingly intensive,” Putin wrote. “The authority of that association is growing every year, and that is quite natural. Our proposed initiatives are aimed at establishing new architecture of multi-polar world order.”

Putin also hinted that India would be welcomed as a permanent member of the Shanghai Cooperation Organisation. “We expect a meaningful dialogue with Indian side within the framework of Russia’s presidency in the G20 that has begun,” Putin said.

“Our consultations in international fora, such as the UN Security Council and BRICS, have deepened during the year,” Indian Prime Minister Singh said after the meetings. “We look forward to working closely with Russia in promoting reform of global economic and international structures of governance.”

The countries also said they favoured discussions for a comprehensive economic cooperation agreement between India and the Customs Union of Belarus, Kazakhstan and Russia.