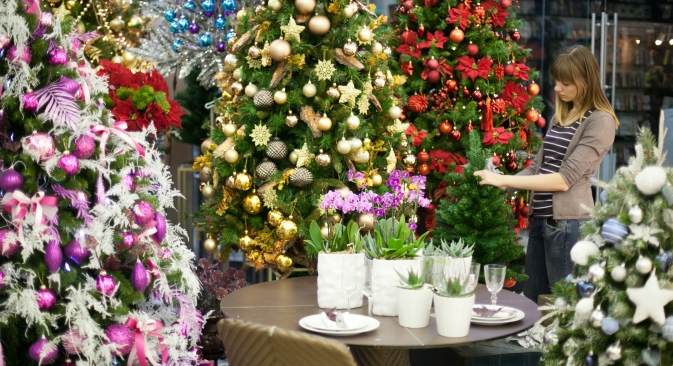 Unlike Moscow and St. Petersburg, the central area of ​​small towns is often decorated with an artificial tree that only vaguely resembles the real thing. Source: ITAR-TASS.

Russian New Year and Christmas would be unthinkable without a tree. Christmas trees are put up everywhere: from houses and apartments to squares and shopping malls. They can be natural or artificial, and there are many special rules and even laws associated with them.

The main tree in Russia stands on Cathedral Square inside the Kremlin. Each year, foresters in and around Moscow hold a contest for the best tree. Entries in the contest must meet the height requirement and have a proper crown. The height of the main Christmas tree is usually about 115 feet, and it should be at least 100 years old.

The process of chopping (or rather sawing) "Christmas Tree Number One" is always accompanied by traditional dancing and carols; Grandfather Frost (Russian Santa Claus) himself must give his blessing before the tree is felled. The locals who gather at the felling site regard the ceremony as a big show. The huge tree is then carried off on a truck accompanied by vehicles from Russia's road safety inspectorate. 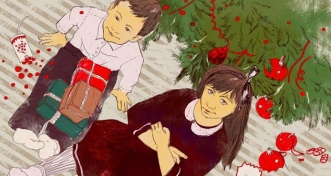 Not all towns and cities opt for real fir trees. Unlike Moscow and St. Petersburg, the central areas of ​​small towns are often decorated with an artificial tree that only vaguely resembles the real one: they are basically green cones with an iron frame, plastic branches, and ornaments.

The reasons are economic, since a plastic tree can be brought out time after time. Another factor is the pressure exerted on municipal governments by environmentalists who warn against using living trees and promote artificial versions instead.

Environmentalists also have the ear of ordinary people who buy Christmas trees for their home or office. The view that so-called Christmas tree bazaars are just as evil as the deforestation of the Amazon is widespread among Russians. Peddlers of real fir, spruce, and pine nevertheless say that their trade causes no ecological harm.

The Russian market is predominantly made up of trees from Russian, Danish, and Dutch nurseries. Native trees are several times cheaper than their European counterparts but cannot compare with the latter in terms of appearance.

The most beautiful and expensive trees come from Denmark. Danish experts are held in high esteem for their many years of experience, and the country's especially mild climate also helps. Before Christmas trees are cut down and taken to Russia, they are grown for 3-4 years in the nursery.

A  Danish Christmas tree retains its appearance for up to six weeks; buyers in Moscow can be sure that it will stand resplendent for at least a month, because delivery and customs clearance take no more than two weeks.

"The latest trend for Christmas trees is to be delivered in pots, which really is the best method of getting them from the nursery to the consumer. That way the roots are kept intact and the tree continues to grow in Danish soil, despite being inside a Russian apartment. Come summer, it can be planted in open ground and will quickly adapt," says Timofei Dudchik, manager of the Yolki-Igolki enterprise that imports Christmas trees and sells them wholesale.

"If any potted trees are not sold over New Year, they can be placed in special refrigerators where they sit quietly until the next festive season, which cannot be said about felled trees," he said.

Real or artificial, take your pick. But whereas plastic trees are available all year round, the Christmas tree bazaars only appear mid-December.