Russian Dozen: New musical talent that made its debut in the outgoing year 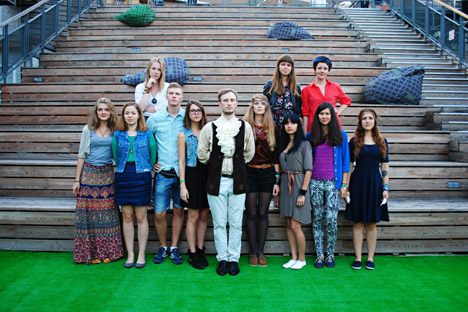 The music genres in Russia's “new wave” of 2012 were as varied as the breadth of ethnicities in the country: chillwave, post-punk, disco and even gospel all found their own fans somewhere amid Russia's vast expanses. RBTH picks the most memorable young groups to have emerged in the outgoing year.

Ten amazing girls from Samara, led by pianist Dmitry Kolevaty, laid down the English track “The River” with Arcade Fire's percussionist Jeremy Gara. At home in Samara, Dmitry and the group only perform a few concerts a year, aiming more for quality than quantity. Their belief is that “music is a direction of spiritual life” and not life itself, let alone any kind of employment.

The current darlings of Moscow's music critics, Scofferlane, hail from the grim outlying town of Electrostal (“Electric Steel”) in Moscow's distant peripheral wasteland, where they play gothic post-punk recorded in the abandoned AZLK factory. The band finds inspiration in Russian literature for their English-lyric songs – Mandelstam, Brodsky and Chaadaev. There is something of the atmosphere of Michael di Jiacomo's movies in the songs, with Tim Buckley and Fred Neil providing the musical inspiration. These guys are aesthetes and then some.

This duo from Mordovia blew open the clubs of Saransk with their entertaining eight-beat disco-punk, exploding the stereotype of “brainbox Russian music.” They have a dozen miserable songs for every cheerful one. Gidropony have been going for four years already, but they have only played 10 gigs in all that time, claiming to be too lazy and idle to do more.

11 Russian bands that suprised critics in 2011

Mummiy Troll end their US tour at Austin's FunFunFun festival

Jack Wood emerged spontaneously, when the group members set off into the woods to visit the grave of their recently deceased dog, Jack, and managed to flag down a car for the ride home. The driver turned out to have been looking for bones in the wood, looking to fashion them into drumsticks; and that is how the band found their drummer.

The band named themselves after their famous dog Jack and the wood where they met. The band has an electrified garage blues sound – their signature style. The lead female vocalist once sang in the Moscow Kremlin in a children's choir – that's Siberian punk for you.

Maximilian is a 19-year-old student at Moscow Pedagogical University who puts down his melancholy electronic tracks using the basic computer program Fruity Loops. After his music came to the attention of Altered Zones (a weighty American music mag for new music), Russian dance venues starting to view it with heightened respect. Ggle Highs emerges out of the background of electronic music of the ‘70s and ‘80s, as the performer himself says. “The music styles from back then have been raised up on high, but they've turned into something else – house, new rave, post-punk – we hear them in new ways.”

Russia's Far East has always been a fruitful source of music, and clubs in Khabarovsk have set forth a new gem in the diadem: 19-year-old Sergey Khavro and his “million music projects.” His piggy-bank already includes indie-rock, dream-pop and chillwave.

This top-end professional and disturbingly young band from Moscow plays synthesizer electro-punk with powerful female vocals. All of their work is in English, and the band puts out covers for Russian pop performers, including singers from “Star Factory” (Russia's version of Idol). The band also goes on tour with the same pop stars all over Russia. The style has been honed to a dazzling sheen and cleaned of every blemish – the band has its eyes on Europe’s club scene, but, for the meantime, is happily playing Moscow venues.

This group's name conceals the identities of three anonymous musicians who play languorous urban pop in Syktyvkar – the capital city of Russia's northern Komi Republic. Why the white masks covering their faces? It could be an artistic artifice, but it could equally be that, in the Komi capital, people do not have a high regard for pop music – both are possible. Even so, the fame of “those three in the masks” has already spread to Moscow. Their backgrounds are diverse – an opera theatre soloist, the head of the electrics department in a wood-processing factory, and a freelance musician. After getting together, the band followed a long road by way of songs modeled after System of a Down and urban pop, the latter of which is the dominant sound on their latest EP.

Bright melancholy, ornate melody and young vocals are the formula for composer and performer Brodsky. He is 28 and he works in a shoe-shop in Kaliningrad. He calls his native city “a cage for the lazy.” From there, Europe is more accessible than Russia, but many Kaliningraders claim “Europe is just as boring.” And this is what the locals do with a guitar and fiddle, when it is 20 degrees below zero outdoors.

The emerging style of witch house is spreading fast in Russia, so taking top place in this genre is far from easy. It is, however, easy to see the reasons behind the popularity of the style in Russia's post-Soviet vastness, with its minor keys and uncomfortable melodies. The genre’s leader in Russia has emerged as 26-year-old Ilya from Murmansk: an industrial chemist by training, a sound engineer by profession, and a musician in his spare time. His inspiration for writing heartbreaking house music was hearing the Russian National Anthem being played by a Syrian band.

Why is it that almost every Russian group is now singing in English? Few styles of music transfer well to the realities of local life. Ifwe is a group singing in Russian about dried-out marker pens, the Kremlin, lost coasts, and the sun over everyone's heads. “We know they don't slag off new songs out of malice,” runs one line in a song from this Petersburg duo. Minimalist lullabies, romantic fuzzy-focus drum-machine and a wistful longing for the Soviet past: it all adds up to chillwave, Russian style.

The St. Petersburg band Surtsey Sounds emerged quite recently, only two years ago. All the players began their separate careers during the years when the term “post-rock” was the by-word for music fans. Their version of post-rock lacks the usual twilight pathos and gloom; atypically for St. Petersburg, it is optimistic, reveling in an intimate beauty that materializes onstage as a chamber-style orchestra.