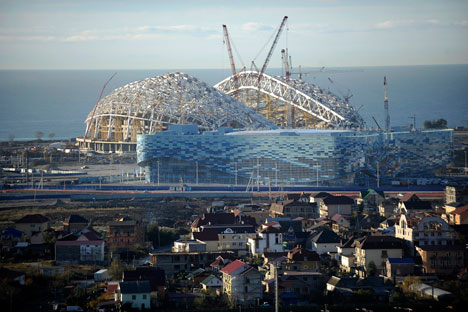 Facilities being built in Sochi have prompted the head of the organising committee to label the city the “world's largest construction site”. Source: Mikhail Mordasov / Focus pictures

With the Winter Olympics little more than a year away, Russia's host city of Sochi continues its preparations with the expansion of infrastructure.

The 2014 Winter Olympic Games kick off in the southern Russian city of Sochi in less than 400 days’ time, and aside from the massive infrastructure being constructed around the Olympic venues, plans for the opening and closing ceremonies are in an advanced stage.

View the gallery: "Building boom for 2014 Winter Olympics in Sochi"

According to Russian daily  Izvestia, an actor portraying Tsar Peter I (the Great) will open the Games commanding a flotilla of five ships containing several heroes from classic Russian fairy-tales.

The ceremony will be broken up into several thematic parts connected with Russian literature and history. A total of $A62 million will be spent on the opening and closing ceremonies, about 20 per cent less than was spent on the ceremonies at the London 2012 Summer Games.

Sochi organising committee head Dmitry Chernyshenko said infrastructure in the city, which sits on the Black Sea coast, is  70 per cent complete and preparations are on schedule for Russia’s first Winter Games.

“Sochi will be the showcase for Russia for the world to see,” Mr Chernyshenko told the  Associated Press.

President Vladimir Putin has made the Sochi Games a focus of his third term and views the event as a key project for improving Russia’s international image.

About $29.5 billion has been earmarked for building facilities and developing infrastructure in Sochi, including roads, some of which were only single-lane until a few years ago.

President Vladimir Putin has signed a law that simplifies the process for issuing visas to foreign athletes travelling to Sochi to compete in the 2014 Winter and Paralympic Games. According to the law, the Federal Migration Service will be able to issue visas and send them by email to the corresponding diplomatic missions and consular services in Russia at the request of the Sochi 2014 Olympic Organizing Committee.

About 1.2 million tourists are expected at the Sochi Games, which poses a potential accommodation problem.

Currently the city offers no more than 34,000 hotel rooms; the International Olympic Committee, however, is insisting Sochi offer no fewer than 41,467, more than half of which are to be in the three-star category.

A new state program has been set up to try to overcome this problem, with hotels being built in downtown Sochi, nearby Adler and Krasnaya Polyana, where many of the sporting events will take place.

Mr Chernyshenko has described Sochi as “the biggest construction site in the world”.

Russia’s southern regions will also receive improved logistics and transport infrastructure, much of it created from scratch. More than 50 transport routes are being built, 367.3 kilometres of roads and bridges, 201 kilometres of railways, 20 intersections and a several tunnels.

Costs have been shared by the Ministry of Transportation and developers.

The Sochi ring road was completed in 2009 and includes 15 bridges and five tunnels spanning 10 kilometres.

One of the major projects still to be completed is the combined road and rail line between Adler, where the airport is located, and the Alpinka Service resort at Krasnaya Polyana.

The project is estimated to cost $7.2 billion.

Russian athletes traditionally perform strongly at the Winter Games but officials are hoping the home-town advantage will provide an added fillip. The Russian team is confident it can improve on its results at the 2010 Games in Vancouver, where it finished 11th on the medals table.